There has been a lot of debate on our Forum about the best RAIDs, configuration, speed, brands and so on. So it was very positive when we came across this excellent concise user review of the Promise Pegasus R4.

We posted Andrew Gormley's FCPX training class details yesterday, but he also does a few equipment reviews. He very kindly gave us permission to share his experience of the Promise Pegasus R4 thunderbolt RAID.

If I'm not mistaken, the Promise Pegasus R4 and R6 were the first commercially available Thunderbolt drives and show stealers at NAB 2011. That doesn't come as much of a shock when you consider that most editors were still using bus technologies that were nearing a decade old at the time. Thunderbolt made some hefty claims about speed and expandability and has followed through on them nicely if not a bit slower than expected. 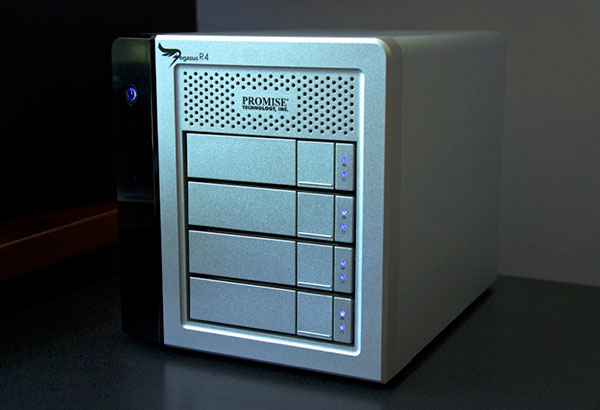 Not much to say here that you couldn't already glean from the pictures. The Pegasus R4 is a piece of hardware you'll want to display proudly alongside your other gear. This is good news because the furthest you can position it from your computer is six feet, the length of Apple's Thunderbolt cable, which you'll need to fork over an extra fifty bucks to obtain. At 15 pounds and dimensions of 7.3x7.7x9.9 inches, it gladly declares "You can move me, but I'm not portable!" To me, that's a great thing and one of the few redeeming qualities of my exisiting Drobo.

The front of the R4 doubles as a laser light show with exactly 11 LEDs glowing/blinking brightly when all systems are nominal. Each of the drives are easily accessed by pressing with a small amount of force on a latch release button and sliding them straight out. It's reassuring to know that they can't be removed accidentally with an errant bump or nudge.

The back couldn't be simpler: two Thunderbolt ports, a serial port for God knows what (firmware updates?), the power connector, and two fans. Some people might be critical of the fact that there aren't more connections, but once you've used Thunderbolt you won't even want to acknowledge there are other ways to connect peripherals.

Like I said earlier. The R4 is a a great looking device and something you'll be proud to have sitting on your desk. It definitely looks like a Mac peripheral with a fit and finish similar to, but not the same as, recent MacBook Pros and iMacs.

Software and Features and Whatnots

The R4 is a rarity in that I actually read the manual before turning it on. I wanted to make sure there wasn't any kind of prep work on the OS side before getting started. I'm glad I did my reading, because in doing so I came across this little gem, straight out of the documentation: 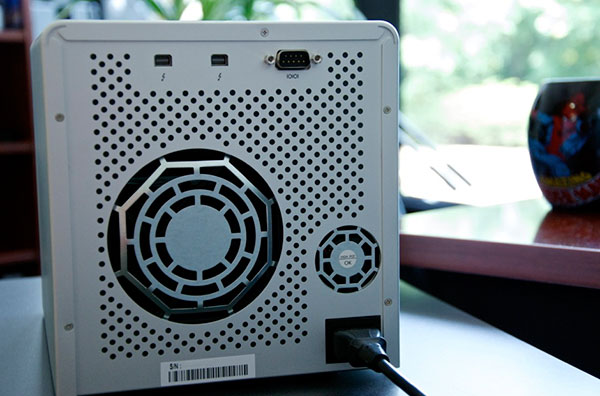 The translation here, as I understood it, is: "When you first plug in your R4, you may take 10 hours to gaze longingly at it, but not use it until it's had the proper amount of time to gain its composure."

Now I'm not saying that I sat there staring at the clock while this was happening, but it took about 9 hours, 24 minutes, and 27 seconds for this initializing phase to complete. Setting lower expectations and then coming in under the mark is certainly one way to get in someone's good graces.

You can actually start tossing files on it right away as it's getting the data protection services up and running, but it won't be a great indicator of performance and pretty much a waste of your time in the event you decide to change RAID configurations after the fact. Speaking of which, this thing supports a crazy amount of RAID modes: 0, 1, 5, 50, 6, 60, and 10. It arrives in RAID 5 mode, which slices off 25% of your storage space for protection. In the 4TB model I use, I have 3TB of usable space but if one drive completely fails, I won't lose any of my data. Before I added my files I switched to a few different RAID modes and they're fully setup within a matter of minutes, though I doubt many people will even bother with this. 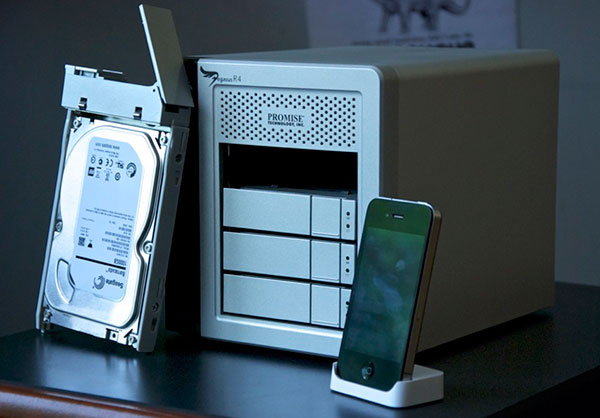 On a Mac, you'll be managing your R4 from the Promise Utility, a native application (read: no Adobe AIR) that gives you the information you need in an upfront and pleasing manner and then a whole hell of a lot more if you require it. It features a wizard interface that helps you configure your device the first time and then sends you on your way.

There's also a whole host of tools you can run instantly or schedule. We're talking about preventive maintenance tasks like Media Patrol which "checks the magnetic media on each disk drive" and Redundancy Check "that ensures all data matches exactly." Once I spend a little more time reading about the benefits of each, I'll likely begin flipping them on one by one.

Yeah yeah, but how does it perform?

I'm happy to report that the R4 is the fastest drive array I've ever used. My test machine is a late 2011 MacBook Pro with a 2.5Ghz i7, 8GB of RAM, and a 256GB factory SSD. The last spec is important because I tested the speed of the R4 against it as well as a USB2 enclosure.

As far as testing the actual device goes, I used the free BlackMagic Disk Speed Test app from the Mac App Store and kept the R4 in its default RAID 5 mode, since that's how most folks will likely experience it. BlackMagic's app allows you to very simply perform a stress test using 1-5GB files. All of these test results are using that 1GB test file, but I saw the same or very similar results from the larger files. I'll start with the internal SSD and we can use that as a baseline: 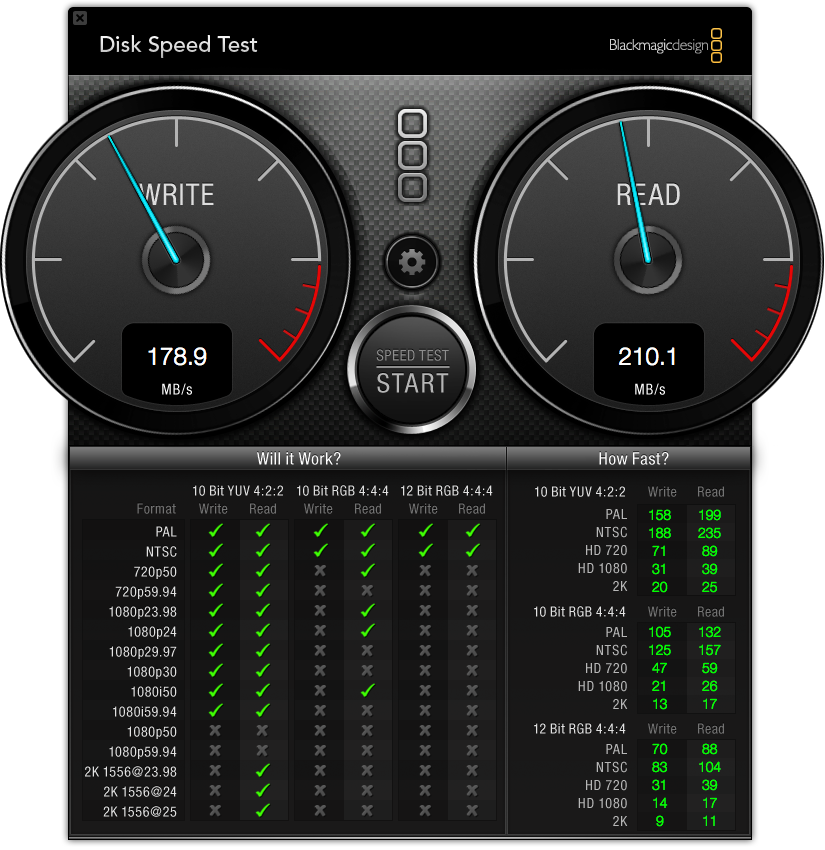 Those are very respectable read and write speeds, in the range of what you'd expect an SSD to produce for the model. With larger files there's a slightly lower read speed, but nothing you'd notice in day-to-day use. Next up, let's check out how an everyday USB2 enclosure (with a 7200rpm 3.5" drive) fares: 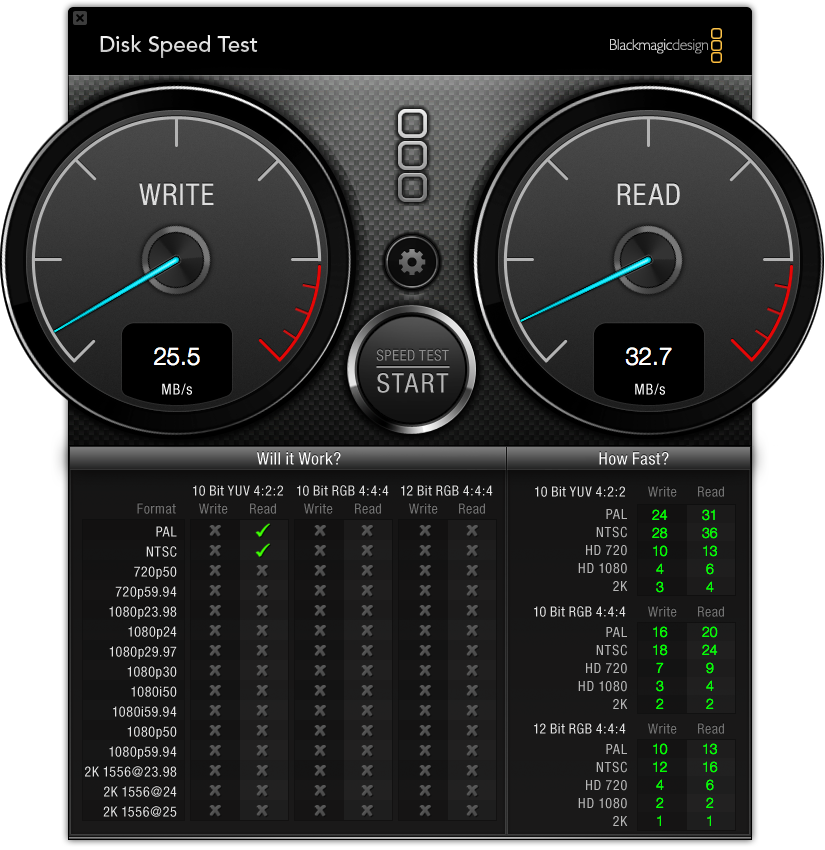 Not so hot, yet this is pretty much what we've been dealing with for the past several years. Now, the moment you've been waiting for, the speed results for the R4: 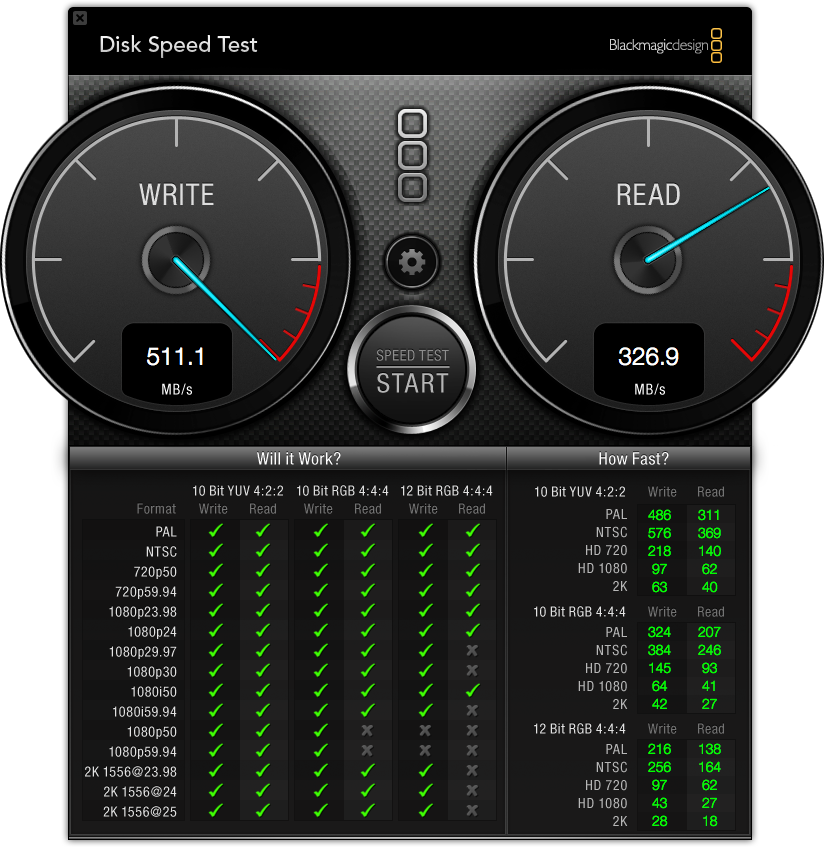 My jaw dropped when I saw these numbers. I honestly thought there was a problem with the speed test, but as it turns out Thunderbolt's theoretical ceiling is 10Gbps versus an SSD's 6Gbps, so these numbers are right on the money.

For real world video tasks like rendering or compression, specifying the R4 as your target or scratch drive provides more than an appreciable performance boost, it's like editing on a machine from the future! Projects open and save quicker, importing directly from an SD card is blazing fast and I could only assume that hooking the BlackMagic Cinema Camera directly into the R4 would create a singularity into which all things are absorbed. A glorious, 2.5k singularity.

Without hyperbole, the Promise Pegasus R4 is the best external enclosure I've ever used and has ruined me for all other devices of its ilk. Unlike other reviews, I'm not going to tell you it's expensive because this is a case where you absolutely get what you pay for and after having some pretty terrible experiences with "comparable" hardware, I would gladly pay a premium for an excellent experience in a device that just works while making my job a bit easier.

As a footnote to this article, it is no secret that Active Storage shuttered their storage business recently. Sad news, but it is a tough market out there with storage becoming cheaper and faster everyday as you can see from the above article.

Promise are offering a time limited trade in deal for anybody in the US who owns Active Storage mRAID products.