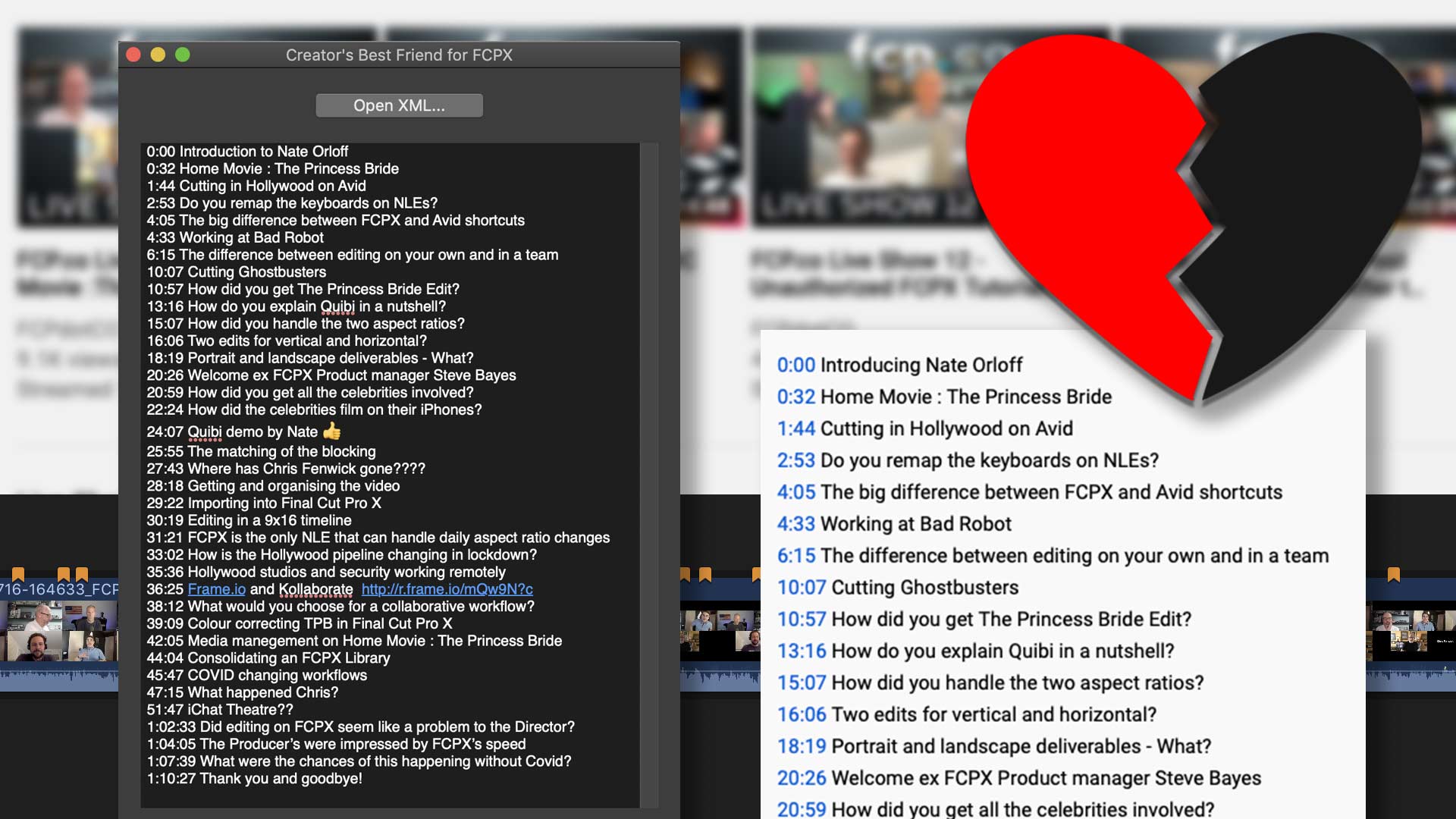 This new app for Final Cut Pro X comes with a story. A joint venture between myself and Philip Hodgetts & Greg Clarke at Intelligent Assistance, Creator’s Best Friend all started from wondering why a YouTube status bar was in sections.

Before we go back, just time to mention that Creator’s Best Friend is now on the Mac App Store at $9.99. So if you make videos for YouTube, this is a bit of a no-brainer as it makes the tedious process of time stamping a whole lot easier and saves bucketloads of time, but you might say I’m a bit biased!

A few weeks ago, I was looking at all the YouTube videos that I could publish for a tutorial round up, right here on FCP.co.

One of them stood out, a video full of FCPX tips from a young lady called CessMercedes. It was indeed full of information, but what made it stand out was the fact it was the first time I had seen the segmented YouTube progress bar in action.

This was also in Safari on the Mac, segments are even handier for navigation on a mobile device. 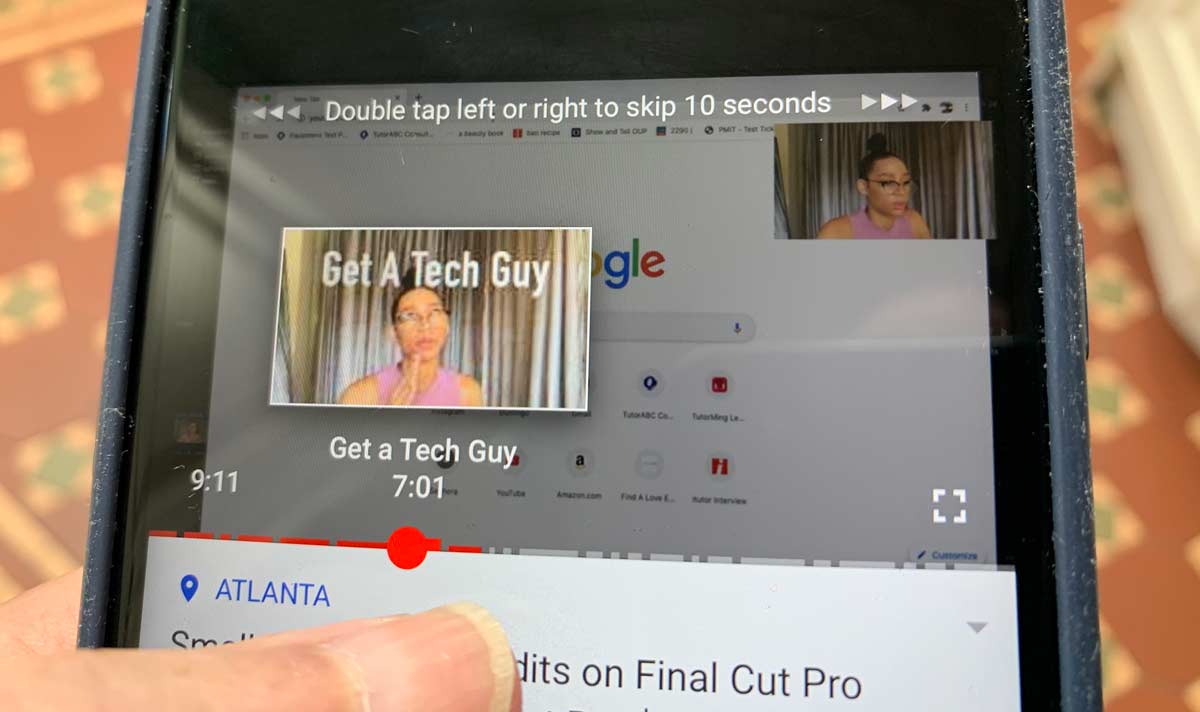 I subscribe to a couple of YouTube newsletters and content creator channels, so I should have investigated further when the news that the chapters in the progress bar had been enabled by YouTube, back in June of this year.

It didn’t take long for me to work out that this was an extension of the timestamps feature in the description box. Pretty simple, tap them in and the chapters appear automatically. Except that it is a real pain in the butt trying to do this accurately in Creator Studio. It is also cumbersome and slow having to stop/start, look at the time and then tap in the correctly formatted elapsed digits from zero.

Then, I had a great idea: Could I put chapter markers on in Final Cut Pro X and then get them out in the YouTube description? After a bit of fiddling and reading the FCPX help,  the answer was no, no way!

Then, I thought about Producer’s Best Friend, a reporting app for FCPX that can log anything on a timeline from a clip to a to-do marker. I’ve used this app many times for accurate reporting of video archive and music returns. It’s published by a couple of my friends, Philip Hodgetts and Greg Clarke from Intelligent Assistance.

Problem sorted, run an XML though PBF, toggle the reporting to show only the chapter markers, then copy and paste them into the YouTube description.

That doesn’t work either! Well, it does, but PBF is too good, even at its basic setting, it outputs too much data and the timestamps are ‘over-formatted’ for YouTube. The hours, minutes, seconds and frames is way too much detail.

I suppose I could have wrangled the data in Excel, but it would have been a pretty ugly workaround knowing my spreadsheet skills.

There was only one thing to do, pickup the bat phone to Philip and Greg.

Which I did, but Greg was out, so I enthusiastically went through the idea with Philip, took him through a few examples and explained what was needed to get YouTube to see the timestamps correctly. He agreed an app was possibly a lucrative opportunity and he would ‘pitch it’ to Greg.

Half an hour later, I got a message from Philip: “He’s on it.”

He was, and pretty soon I had a beta to test. Well, when I say beta, I mean as the app only has two buttons, it looked pretty finished! Apart from a couple of tweaks and a name change it was, and this is the app you see in the store today.

And it works a treat. So simple, so useful. 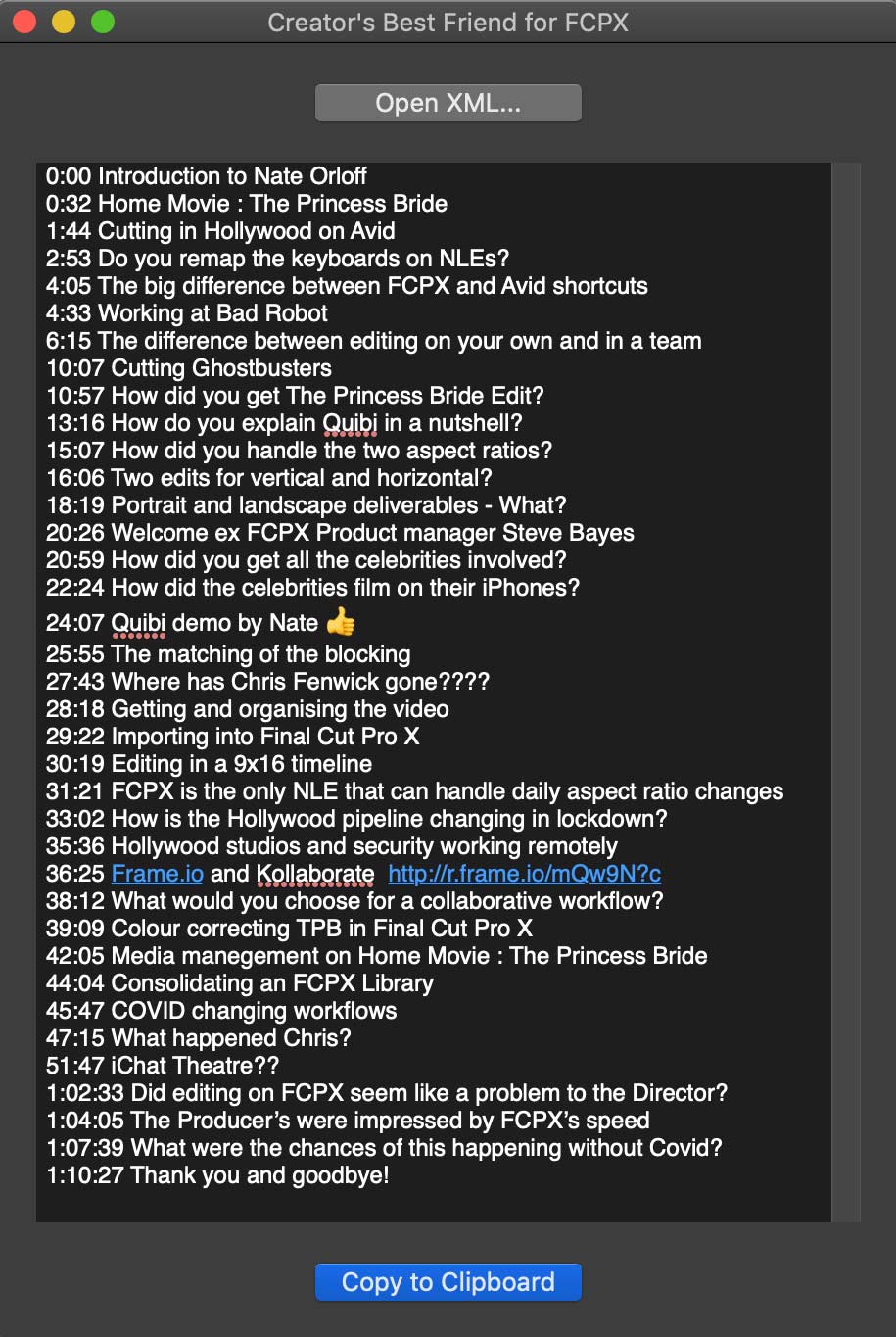 Just enter the chapter markers in FCPX, export an XML, run it through Creator’s Best Friend and then paste the timestamps into the video description in Creator Studio. 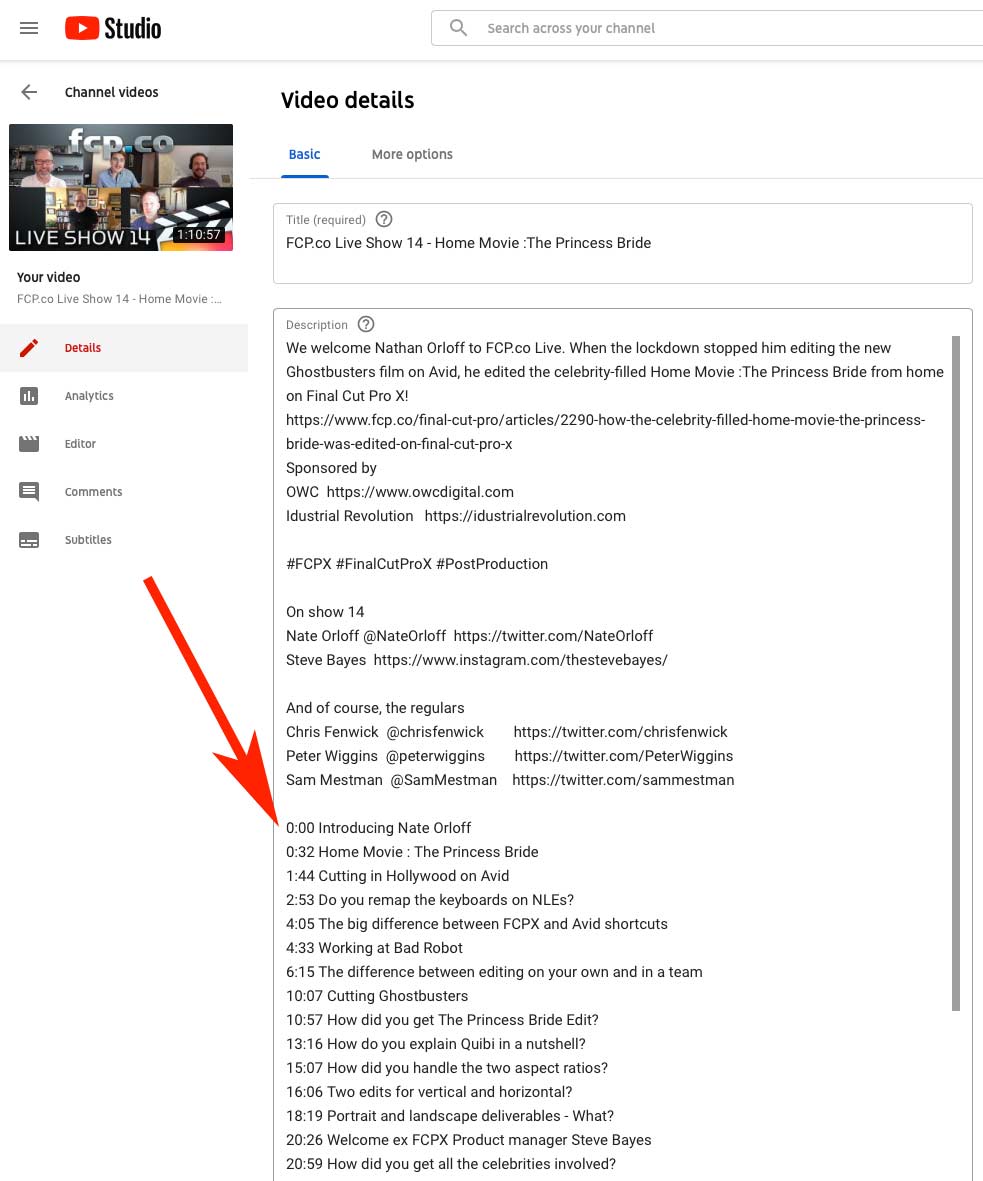 Then, I wondered do emojis transfer over ? - They do. 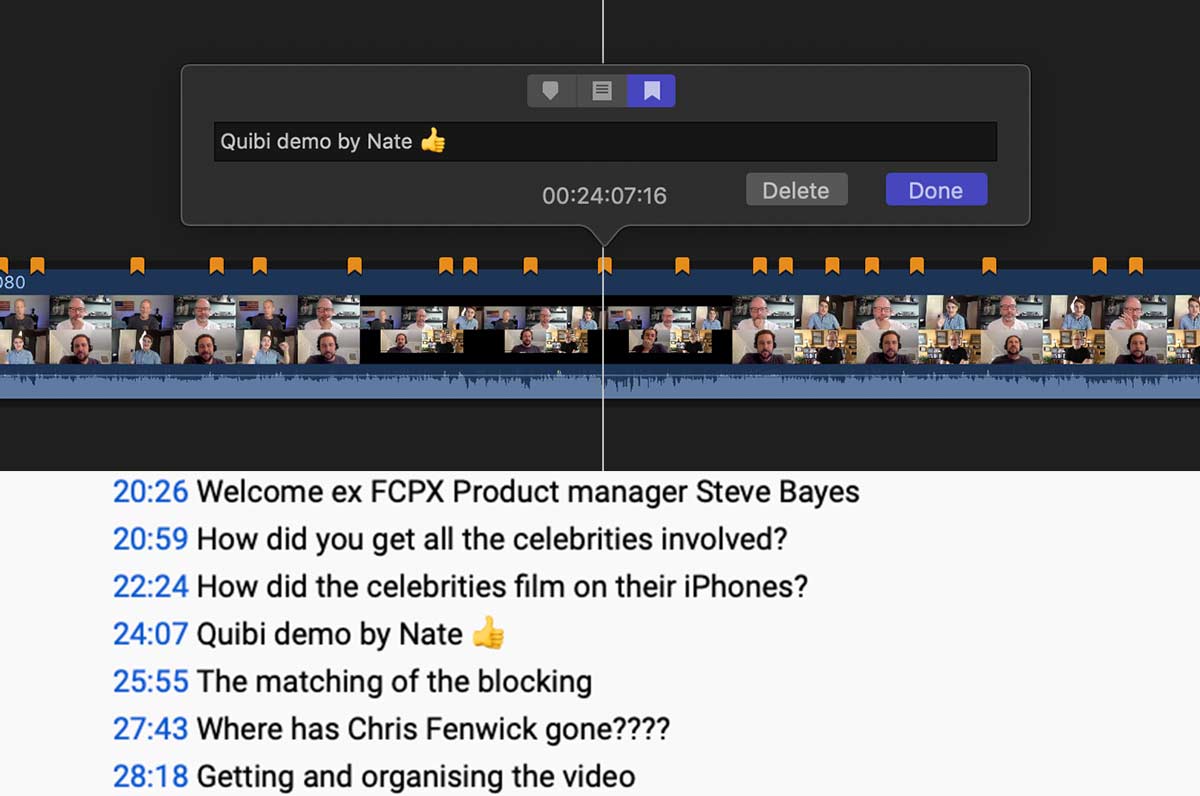 Then I wondered, do URLs transfer over- They do, clickable as well! 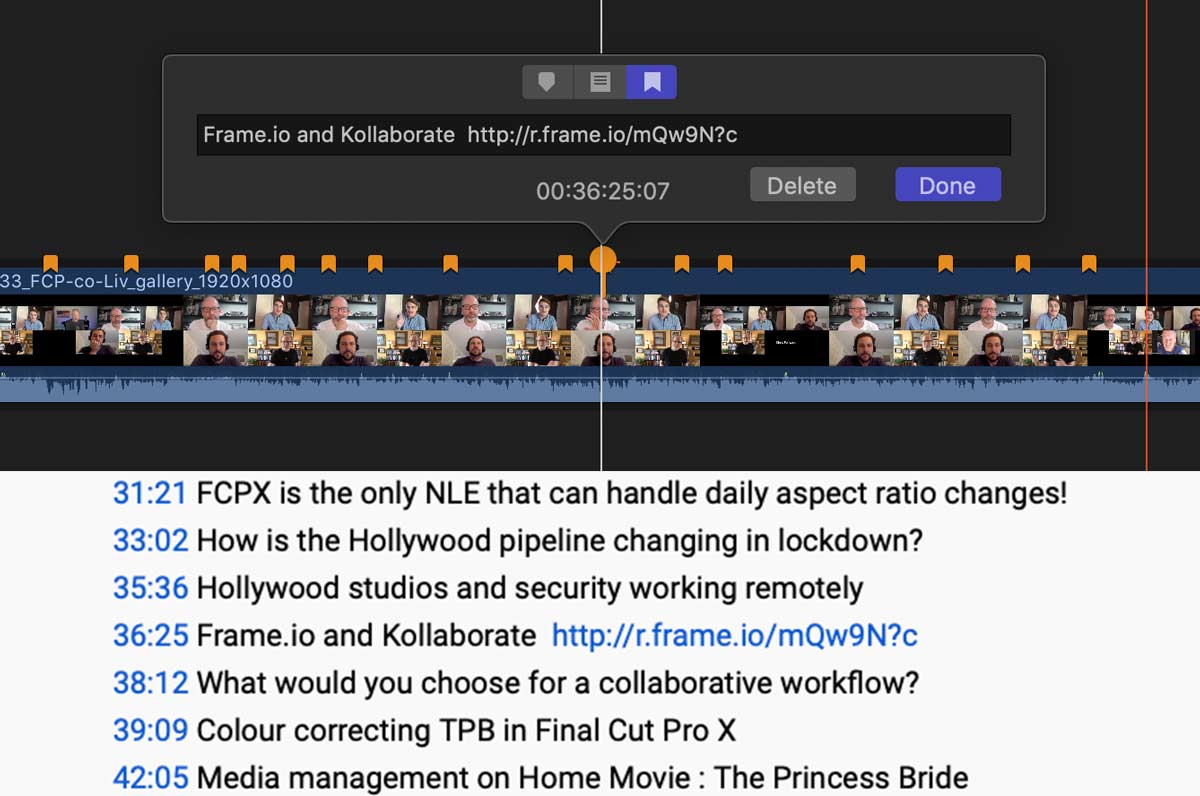 And this brings us back full circle to Cess, (although she doesn’t know it yet!) who can add URLs of products that she tests out timed perfectly in FCPX and they will end up as clickable timestamped links in the YouTube description.

This will help make more money for YouTubers.

Philip, Greg and myself think this is going to be very popular amongst YouTube influencers, or maybe just YouTubers who like to get all that extra data into the big Google search algorithm. After all, getting your videos watched by as many people as possible is surely the main objective of every YouTuber.

Views are possibly slightly less important to Vimeo users, but kudos to Philip Johnston who was the first to spot that the timestamps from Creator's Best Friend also work in Vimeo.

Hopefully there will be a Workflow Extension for Final Cut Pro X coming along soon!