As a follow up to our rather controversial article on FCPX on a MacBook Air, we thought we would do a roundup of FCP.co readers' real life editing experiences on the combination.

The article that we published on the rendering problem with FCPX running on a MacBook Air certainly stirred up quite a bit of feeling in the community. It was interesting as the mail we received was split down the middle. Half criticised us for bashing the MBA and the other half praised us for not being 'complete Apple fanbois.' (Not our words or spelling we hasten to add!)

So we decided to contact everybody who had posted a comment or had emailed in saying they were editing on a MBA and asked them to share their thoughts and experiences.

I had been editing for several years on a Mac Pro. Last summer I started a Motion project on my MacBook Air and found it quite capable. Checking some benchmark results online, I was surprised to see that my "little 11” exceeded the performance of my Pro in several categories.

Like many, I have struggled over the last year (or more) with the decision to buy or not to buy a beefier Pro. But even the crazy priced top-of-the-line ones did not benchmark fast enough to justify the cost. I would wait (and wait, and wait) for the next Pro.

So I switched my system, software, and hardware all at once over to the Air, leaving my old Mac Pro/Final Cut 7 system intact. I have never looked back.

My backpack-friendly editing system is now an 11” MacBook Air (Mid 2012, 2GHz i7, 8 GB RAM) and a few USB3 bus-powered drives. Editing 720p, and even 1080p, from those tiny little drives is a breeze. If the project is small enough, working straight from the flash drive is a dream. I don’t get much more than an hour or two of battery when pushing the system hard, but I'm usually plugged in so I am fully charged when need be. 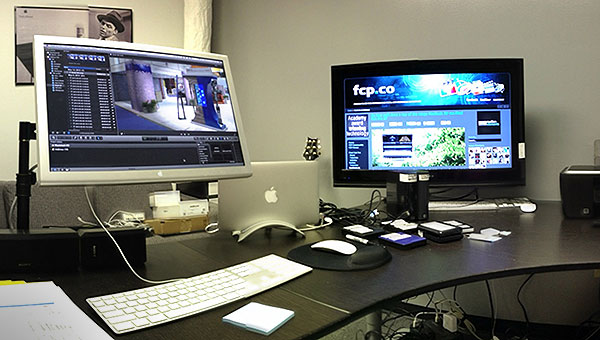 My work desk is a constantly shifting spiderweb of USB3 cables and portable drives. When I am in the office I plug into a hub, a speaker system and a monitor. For a while I tried using a USB to HDMI for a third monitor. It works for the most part, but due to the processor hit I only use it for client meetings.

There is something satisfying about projects living on portable drives. It's a stress reliever just knowing I can grab a little box on the go that contains everything I might need for that client or project.  Back-ups are easier too. I use SuperDuper to keep sparse disc images up to date on a desktop drive, then sneaker net the portable drive to our central Mac/Drobo system for on-line archival. At the end of the project I just pop the portable drive on the shelf, et voila; three redundant backups. Once every month or so, we backup the Drobo and move that disc offsite.

I have been so happy with the MBAir that I recently sold my giant home iMac. It was a great machine, but since my Air is always with me in my backpack, I stopped using the iMac. That's another plus; maintaining one mac instead of three (work, home, Air.)

Sure, I will likely buy the new Mac Pro in December (or whenever), and it will be awesome working at super speed. The dual GPU setup is very exciting. The lack of internal drives? Doesn’t bother me. It will feel right at home in my spiderweb. 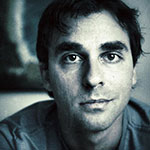 I BTO'd my machine. It's a 13" MBA with 8GB ram (because you can't update later) and the i7 processor. The i7 is a good upgrade because it effectively doubles the cores because it supports hyperthreading. Great for churning through video. The HD is the 256GB SSD.

I've been editing a series of short "music videos". 10 bands, over 400 clips. I've been on the go, so I needed something portable to at least get a 1st pass done. I converted the footage to ProRes Proxy and work off a Seagate Backup Plus drive (1tb) connected via USB3.0. Far from the ideal hard drive, but fast enough. So far the program is quite snappy, with the skimming very responsive. The biggest downside (as has been mentioned) is the small screen size. But it's not the end of the world.

I did a quick test outputting one of the videos that was over 4 minutes. No rendering had been done. Switched the files back to original (all shot with Canon DSLRs) and hit output. From the time I hit save until the time the master file appeared it took 3:49. Not too shabby.

I was initially quite concerned that the machine would not be powerful enough for an FCPX edit, but I did not have the budget to afford the 15" MBP with the discrete graphics. The 13" MBP would be an option but it too doesn't have discrete graphics. Since FCPX is a graphics card hungry program, it made more sense for me to go with something that would also double as a field machine with it's insane battery life. So far, I have been pretty thrilled and surprised that this little laptop sometimes feels snappier than my 27" iMac!

And finally Ken Kreshtool told us about his rendering experiences.

I have an older Macbook Air 4GB (first of the "wedge" generation, I think), so I decided to try your "Far Far Away" test. (FCPX 10.0.8). I use the Air for all kinds of very-small-project edits, and never had it take very long to render anything.

I had a similar — but fundamentally different — experience from you. I started the "Far, Far Away" render. It got bogged down somewhere between 50% and 60% done after about 5-10 minutes, with the rainbow pinwheel starting to happen everywhere. So I quit FCPX, which took about 2-3 full minutes (!), and restarted it. The render completed quickly, faster than 1% per second, so this second effort was under a minute. The whole process might have been quicker if I had quit and restarted FCPX when it first bogged down, but hey, it's hard to tell when exactly to give up and do a quit-and-restart.

The symptoms sound to me like FCPX is trying to do the whole danged render in RAM and it's just getting full. So then FCPX or the OS attempts a painfully slow form of memory swapping in order to try to keep going, or something. But when I asked FCPX to quit, the symptoms seem like FCPX is taking time to write whatever it has already rendered to disk, and is then ready to start with a fresh and open mind.

Now, quitting and restarting FCPX in the middle of a render is a pretty crude way of getting responsiveness. But it works on my Air. And in my very-small-project editing on my Air so far, I've never run into this before. The "Far Far Away" render must be a whale!

We had other people comment that stopping and then restarting the render sped things up enormously. Also many people with 8GB of RAM experienced no problems at all.

As always, please feel free to add your MacBook Air editing story in the comments below.