So how well does a top of the range MacBook Air run Final Cut Pro X?

We had the opportunity to test out a top of the range MacBook Air and naturally we thought it would be a good idea to see how it performed with Final Cut Pro X. We reveal some very dramatic performance figures.

As we said in our previous article, the MacBook air isn't normally a machine that we would have in the office, so a loaner for a month gave us the opportunity to try it out.

The machine supplied was a top of the range 13 inch model, 1.3Ghz processor, 4GB of RAM and 256GB of internal storage. 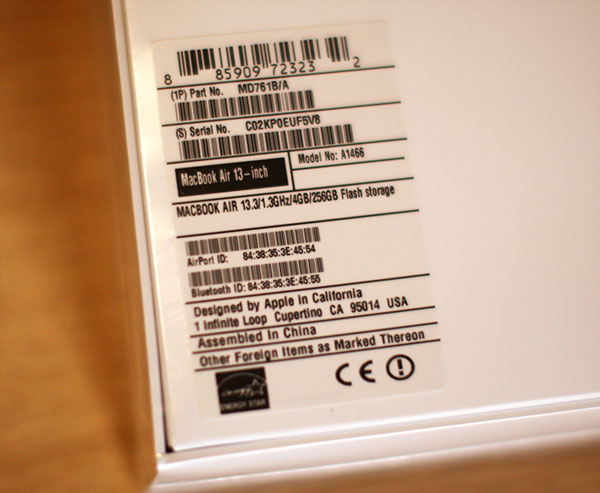 The machine is small, but not as small as you would expect if you are a Retina MacBook Pro user. 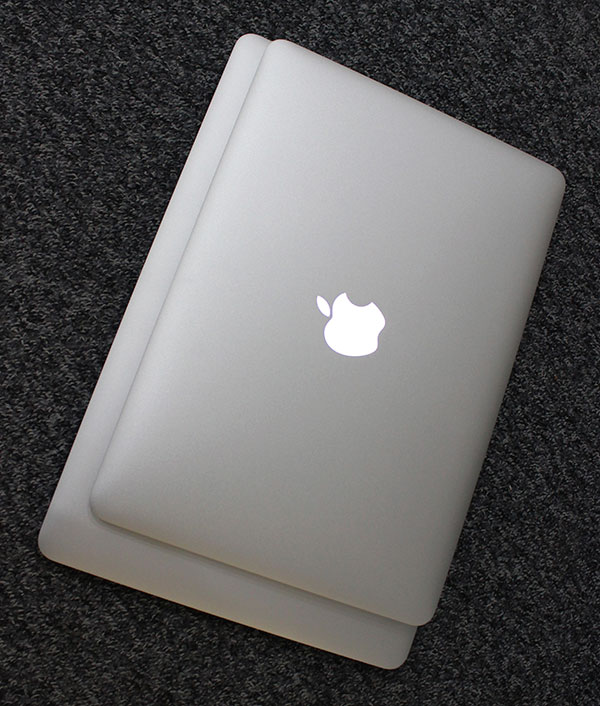 Previously in a comparison to a MacBook Pro, the Air would look very svelte against its bigger brother packing a spinning hard disk. Now that the MacBook Pro has built in flash memory, the back thickness of the two machines is very similar. 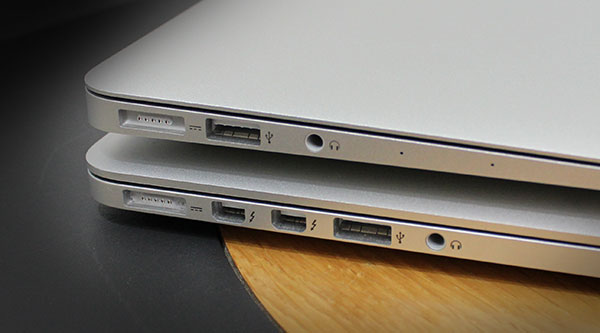 On the left hand side of the Air you'll find a MagSafe 2 power port, a USB 3 and a headphone connector. The two little holes on the right of those are microphones. Power consumption on the MBA is very low and working on the machine doing web browsing or email is possible all day long without a top-up. The moment you stress the MBA with a render, the fan kicks in and battery life will drop a lot more quickly. Travelling without a mains connector with a laptop feels strange & slightly exposed. 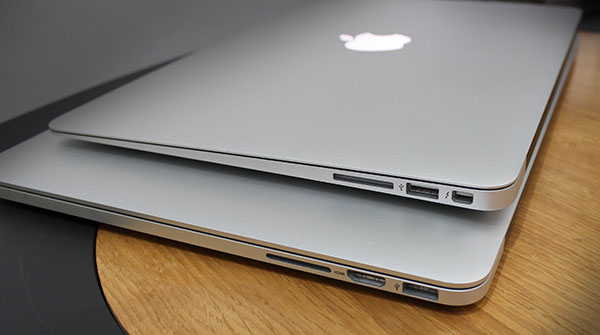 The front of the MBA chamfers down to almost nothing, the Retina is the same thickness front to back. Connectors on the right hand side are an SDXC card slot, another USB 3 and the machine's only Thunderbolt connector.

Our first impression was not one of the size, but the display. The Air doesn't have a retina screen which means if you've been used to working with one, you'll find the MBA screen soft. The maximum resolution on the Air is 1440 x 900, so you won't be watching any HD 1080 material pixel on pixel. As a comparison, the cheapest 13 inch Retina MacBook Pro has a native resolution of 2560 x 1600.

The lack of a second Thunderbolt port could prove to be a problem. All peripherals apart from one would have to be passthrough and not end of chain devices. If this doesn't seem a problem, remember that connecting to the internet or a network via Ethernet will always be at the end of the chain. USB to Ethernet adaptors could be utilised to get around this problem.

So having powered the machine up and done any software upgrades that were needed, we ran the Blackmagic Speed test. 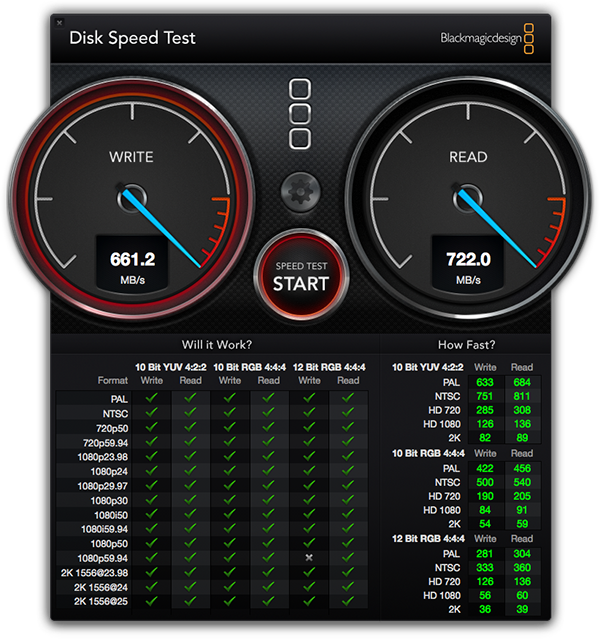 A pretty impressive performance that beats a Retina by about 200 MB/s on read and write. Apple say that the flash memory in the new Air is 45% faster than the previous generation.

But will you be using the internal memory for video files? Probably not as 256GB could become limiting once you've downloaded all the applications you need with content. It's enough space however to put a single report together if you were in a war zone and your pocket Thunderbolt drive had saved your life by taking the bullet hit.

So how did the MacBook Air handle FCPX? There is some good news and some very bad news.

We tested both the MBA and a Retina MBP by opening up and then closing a complex FCPX project from a Thunderbolt drive. This would give the machines the opportunity to write or cache any files it needed. We then averaged the times

24 Seconds to open the project on a 2.7GHz Quad Core Retina MBP.

26 Seconds to open the project on the 1.3Ghz MacBook Air.

Which is pretty impressive performance for a machine that is much lower powered and under half the price! Navigating through the project was fluid and we didn't experience any real differences between the two machines. The lower resolution of the Air did crunch the FCPX GUI smaller.

Final Cut Pro X relies heavily on the graphics card or chip of a machine to do all the heavy lifting effects work. Time to see how the MBA faired with the machine's combined CPU & GPU.

We had an online debate about devising the best method for testing a machine's 'FCPX grunt' and in the end we came up with the fact that the simplest idea was probably the best.

The 'FCP.co Far Far Way FCPX Stress test' involves timing how long the built-in title generator Far Far Way takes to render. Just start a new project, then drop the title on to the timeline. FCPX will ask you about resolutions, just click ok. A default duration will be set automatically and it won't be long before the background rendering kicks in, which needs to be enabled.

The Retina MBP rendered the title in 34 seconds, which is about what we expected in comparison with the other office machines.

The MacBookAir didn't do so well, In fact it nearly didn't do anything as it took over 2 hours to render the title generator! 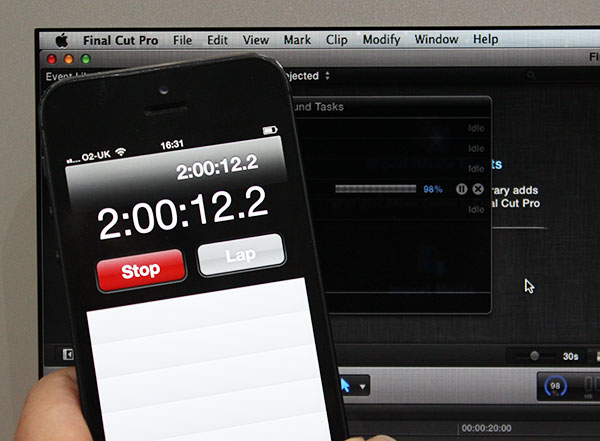 Let's just repeat that. It took over two hours to render a title on a MacBook Air that took 34 seconds on a Retina MacBook Pro. A huge difference that we we not expecting. Double or triple the time maybe, but not by this massive factor.

So what is the problem? We can only speculate that there is a mismatch between the combined CPU/GPU of the MBA and FCPX/Motion. Does FCPX have to get optimised for every GPU that Apple builds into machines? We don't know, but we wouldn't be surprised if this was fixed in an update.

And sadly that is where we had to leave the testing, rather pointless carrying on after such a poor performance for rendering.

The MacBook Air is a small and light machine that is perfect for somebody who travels, surfs the web, answers emails and maybe is away from a power socket for the whole day. Another great alternative (and cheaper) would be a Retina iPad with a bluetooth keyboard case. This combo seems to be very popular with train travellers and has the advantage over a MBA of a touch screen.

If you want to edit on the MacBook Air, you will find it limiting. The lack of a retina screen and the pixel real estate will take its toll on your eyes and compromise usability. Plugging up an external monitor is possible, but that will stress the GPU even more.

We hoped that the MBA would be the perfect computer for shooter journalists to edit their reports on, but after out tests we think that the cheapest Retina MacBook Pro would provide a much better option. If space really is that critical, (should you be on the International Space Station or at camp three on Mount Everest) then yes, you can run FCPX. You will find it very slow should you want to put together anything more than a very simple timeline.

Have to say we are disappointed.