Can you recommend so
FCPX.guru

STOP MOTION - How to
arc

How to change export
Tom Wolsky

MOTU display their HDX-SDI with Thunderbolt running with FCPX

MOTO Inc is a relative stranger to the capture and playback market for video, so we thought we'd take a look at the new Thunderbolt equipped HDX-SDI.

The video capture hardware industry is made up of the three giants, BlackMagic Design, AJA Video Systems and Matrox Digital Video Solutions. They all make good products, but tend to eclipse the newer companies to the market such as MOTU.

To put this straight we visited the MOTU stand to take a look at the HDX-SDI with Thunderbolt. How could we not take notice when one of MOTU's other products, an audio unit won a "Most Badass Interface" award. 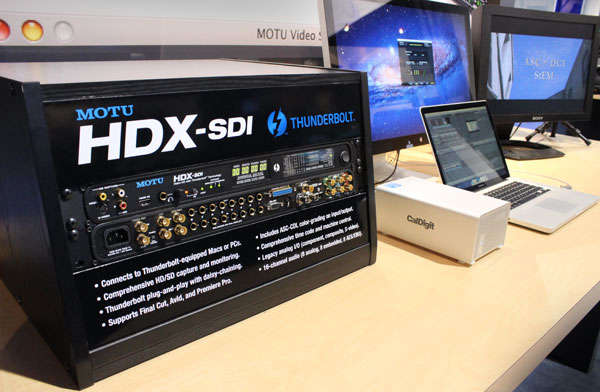 It's not the first time the box has been here at the Convention Centre, it debuted back in January 2012 at CES.

The HDX-SDI with Thunderbolt is a $895 19 inch rackmount capture and playback device that is very similar to their existing HDX-SDI, but benefits from the now 'industry standard' addition of Thunderbolt. (End of chain device)

For the best-possible image quality, users can capture uncompressed pixel-for-pixel HD video input via HD-SDI or HDMI with 4:2:2 10-bit color depth and full-raster 1920 x 1080 resolution. For compressed workflows, users can choose ProRes, ProRes HQ, Avid DNxHD, or the codec of their choice.

Although the box has SDI and HD SDI outputs, it won't do any up or down conversion. It also seemed a bit limited in codecs, but hopefully more will become available in time.

As MOTU have an audio hardware background, the audio monitoring has a few nice touches such as audio level monitoring, a headphone socket with volume control and also a cool timecode readout. Hopefully the video software component of the box will be developed to turn this in to a very versatile tool.