When the preview of Mountain Lion was announced, everybody thought how cool it would be in the future to mirror your FCPX desktop to an AppleTV. You don't have to wait until after the summer or later for the new cat, we show you how to do it now.

Chris Duke sent us a very timely email last week amongst the announcement of Mountain Lion and the proposed AirPlay Mirroring with an AppleTV.

He is sharing his FCPX screen to a large monitor via an AppleTV today! We'll let him take up the story...

Yesterday I found out about AirParrot, which uses AirPlay to mirror a Mac's display to Apple TV much like you can from the iPhone 4S or iPad 2. Apple hasn't made this technology available via OS X yet, but the rumor is they're working on it. (Email came in just before the ML announcement- Ed) A 3rd party developer has already figured it out and for $10 it's possible.

I've tried it on my Mac Pro and my Macbook Air and it works great! I can already see how it will greatly help us during the editing and screening process. I can "sling" my screen to any other Apple TV in my house, such as in my office (as shown), the family room where there's more seating, or our master bedroom to annoy my wife :) 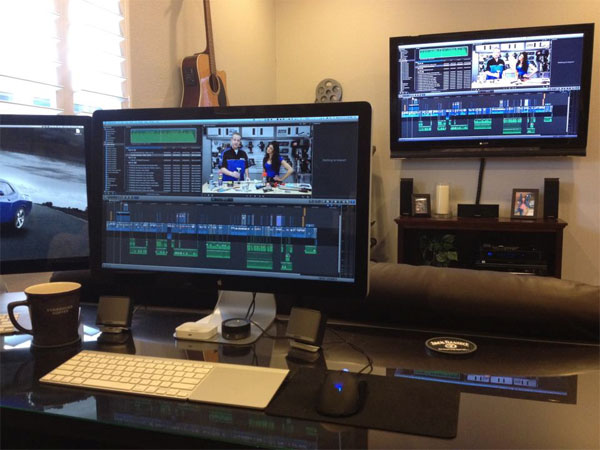 So what you see here is my 27" Mac Pro's display in the foreground, and using AirParrot I am mirroring everything to my 52" Sony on the wall in the background. There's no audio (they say they're working on that), and the refresh rate isn't as good as AirPlay on my iPhone 4S, but this is perfect for the times I need it--such as this past weekend when I was editing the latest episode of Motorz with my Associate Producer, Jason Gillmore.

Many thanks to Chris for sharing this tip with us here on FCP.co. For four years Chris has been the Executive Producer/Host/Editor for Motorz, a television car show series that is also distributed online. The website is www.motorz.tv

As an afterthought, maybe the refresh rate might be better if the AppleTV was connected via ethernet.

Chris has just sent us an update:

They updated AirParrot today... now slings audio, has improved frame rate (up to 60fps), and now supports second display with FCPX. Works perfectly (see my updated photo). I hope Mountain Lion supports the viewer in a 2nd display like this. 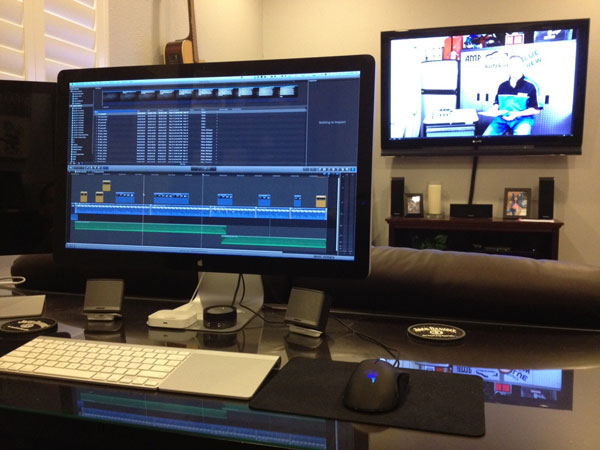