We can't believe we read a tweet this morning saying that there weren't any new Thunderbolt products on display at IBC. Maybe they didn't go past the G-Technology stand and catch sight of this 8TB monster prototype.

It would seem that the majority of hard drive manufacturers have realised the potential of Thunderbolt and have products in development or very close to shipping.

At IBC, G-Technology were showing off a prototype of their 8 Terabyte G-RAID with Thunderbolt connectivity. It is billed as the highest capacity two drive RAID 0 external storage device in the world. 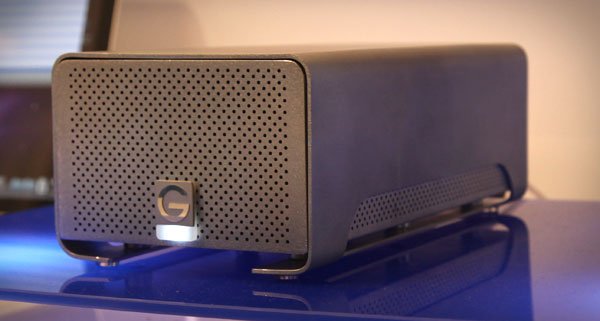 The model features Hitachi's new 4TB 7,200 RPM drives giving the unit a write speed of 221 MB/s and a read speed of 250 MB/s. The case will be smaller than the prototype on display as it contained some custom circuit boards. It has no other connectivity on the rear, just two Thunderbolt ports allowing pass through for daisy chaining.

“We understand the process of creation, and today, digital video editing is no longer facility‐driven – It’s driven by the places and lifestyles of the people doing the work,” said Steve Pereira, vice president, Hitachi GST, Europe Middle East and Africa. “Our G‐RAID Thunderbolt demo connected to a MacBook Pro shows how our customers can get lightning speed and huge capacity in a single RAID 0 storage solution to easily edit anywhere. Built like a tank, our G‐RAID solution has been the cornerstone of our business, and we look forward to bringing our Thunderbolt‐based family and 4TB‐based solutions to the market. WithG‐Technology’s high quality, high performance commitment, our customers can continue to focus on their work and not on their equipment.”

No word on price but we were told that it will probably be scaled up from the £500 6TB version. You'll be able to buy the unit in late November and other Thunderbolt products are due for release in Q1.

We found this G-Technology video from NAB 2011 in April.