The newly announced Thunderbolted Intensity Extreme from Blackmagic Design is targeted at professional videographers. Small, bus powered with HDMI in & out, it will retail for €209.

We've had a bit of a tour of all the main players in the capture/playback card/box market out there and today it was the turn of Blackmagic Design.

The new Intensity Extreme is the little brother of the Ultrastudio 3D and is aimed at videographers who don't need HD-SDI / SDI in & outs.

"We think the combination of HDMI and analog on an extremely compact Thunderbolt bus powered design combined with an affordable price will change the lives of thousands of professional videographers," said Grant Petty, CEO, Blackmagic Design Inc. "Intensity Extreme features an amazing design thats machined out of a solid block of aluminum! Only Intensity Extreme gives you compact size, power efficient design, high quality and incredible strength, that is simply perfect as the ultimate portable video solution."

We agree it's pretty small and it's bus powered because the Intensity Extreme is an end of chain Thunderbolt device. It will work with Adobe Premiere Pro, Apple Final Cut Pro 7, Adobe After Effects, Adobe Photoshop and any QuickTime based software application. You cannot monitor the output of Final Cut Pro X with this device by trying to display the second desktop. 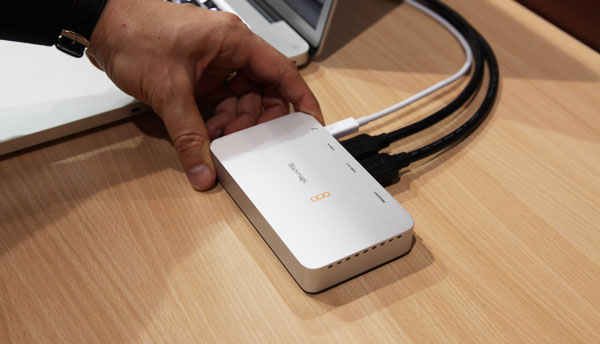 Intesity Exteme will be available in Q4 for €209. Don't forget to save €50 for the Thunderbolt cable from Apple which we have heard are getting very hard to find due to stock shortages. The US Apple Store has the cable in stock but European stores are showing 5-7 days delivery time.

On show right next to the Intensity Extreme was the UltraStudio 3D. 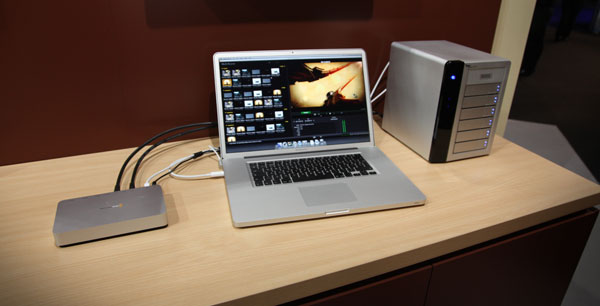 This wasn't glued to the desk. 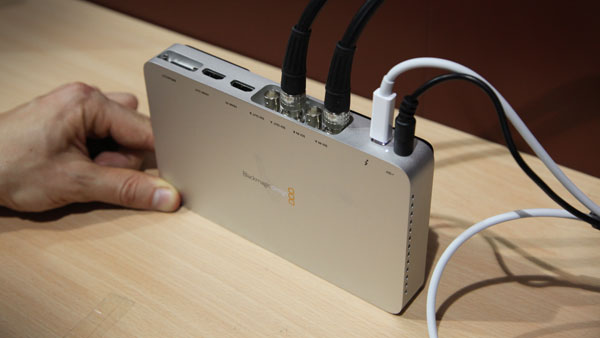 You can output from FCPX using the Ultrastudio 3D (via the desktop method) although you won't be able to monitor in 5.1 should your project be set up to edit surround sound.

So two I/O solutions from BlackMagic Design for you to choose from if you need to have Thunderbolt connectivity. If you need more ins and outs than just HDMI and analogue audio, you will need the Ultrastudio 3D. If you don't then the Intensity Extreme looks very good value for money.