Apple loan FCP.co a top of the range iMac to test. Part 2 Living with it!

A part two to our article on Apple's new 27" iMac that was very kindly loaned to us. We sum up our thoughts on the machine and come to the conclusion that there is one big problem with the iMac.

We were very sad when the DHL man came to collect the 27" iMac that had been very kindly lent us. We wrote up our initial thoughts and findings in an earlier article just after it had arrived.

So let us sum up our findings, we will post the one big problem the iMac has at the end of the article.

There's no doubt that it's a beautiful machine, put next to other Macs & displays in the office it shows that a lot of design had gone into the little things. The screen is bright and we didn't suffer from bad reflections even though a window was behind the operator. The thin edges are gorgeous, but if you spend most of your time in front of the screen, it doesn't really matter how thick they are!

One moan here, if you are regularly plugging or unplugging USB or Thunderbolt cables, having to reach around the back and 'feeling' for the ports isn't great. Our directors keep handing us music on a USB memory stick for example. We would certainly buy a third party USB3 card reader if we were ingesting a lot of footage from SD cards. Trying to insert one is almost impossible without twisting the machine around first. 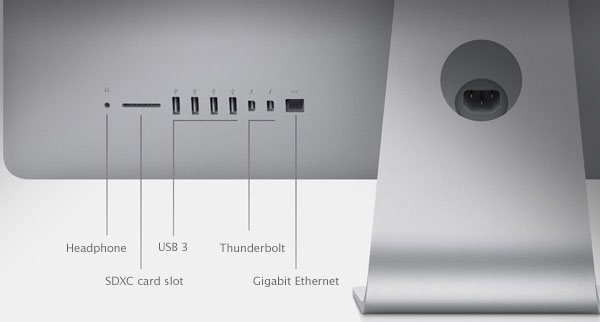 If you are going to be doing a lot of FCPX (or indeed FCP7) editing then the supplied basic bluetooth keyboard isn't that great. We would add an extended Logic Keyboard for access to the number keypad for data entry and keyword tags. A cheaper solution would be to buy a skin for the supplied keyboard.

Buying any computer or peripheral without Thunderbolt is excluding yourself from one of the easiest to use and fastest technologies there is. With the double speed Thunderbolt upgrade announced at NAB this year, this connectivity removes the need for space to accommodate 3rd party expansion products such as fibre channel cards. Should you really need a specific PCIe card, then there are many Thunderbolt expansion products out there.

A Gigabit ethernet socket allows for connection to the internet without using up one of the Thunderbolt ports with an 'end of chain' adaptor. Then again, Facebook surfing has gone these days now Final Cut Pro X has background rendering!

So how did it perform? After all, this is the fastest Mac money can buy.

In a word, quick. The fusion drive works well and is one of those features that 'just works.' As Apple described, it aims to give the speed of Flash with the capacity and price of a traditional spinning disk. If you've been using a machine with a hard drive as the boot drive, be prepared for some huge speed bumps when working a 'fusion drived' desktop machine. For larger files including video, we would expect users to have these stored on an external Thunderbolt drive.

Working with FCPX was a dream. Although our projects were only medium sized, everything seemed to work without having to wait for anything to catch up. Or in other words, it can work as fast as you can. We are sure that some FCP7 diehards would be surprised to see how quick it is to edit with FCPX on a fast machine such as the 27" iMac.

The model supplied had 32G of RAM installed and as FCPX puts all the thumbnails into RAM, we didn't see any delays in building the event views. We would probably max out the machine with cheaper RAM from a third party supplier if we bought one.

Then we decided to load up Final Cut Pro 7, not for a laugh, but for a real job! Our old MacPro kept on failing to render a ten minute sequence that contained many large stills. Even rendering a couple at a time (they did have a large lighting effect plugin on them) caused the dreaded 'out of memory' message. The new iMac took it all in its stride and we only saw the message again once. As FCP7 is a 32bit app, it can only access 4Gig of the installed memory. Over 4 days of FCP7 we didn't have one crash either.

Did we mention how quiet the machine is? It doesn't make any noise and if you have to sit in front of a computer all day you will appreciate how tiring a fan blowing non-stop can be. One downside is the lack of a retina screen. This would push the price of the machine even higher, but if you are used to looking at a retina MBP or iPad, you will think that the text looks slightly soft. Another example is Photoshop, the first time you work with images in Photoshop on a retina screen it is breathtaking. As prices for displays come down, we can see retina screens being standard on all models, but this is someway in the future for the iMacs.

So the bottom line, would we buy one? Yes. It's a very fast and very capable machine. If you are editing on FCPX all day long, five days a week then you won't get much faster. If you are converting clips from one format to another using Compressor, then a beefy multi-core MacPro will do the job more quickly.

So what is the iMac's big problem?

It is called an iMac and therefore it's not seen as a professional machine or taken seriously in a pro environment.

In post houses, the iMac used to sit on reception whilst the Mac Pro towers did the heavy lifting in the edit suites. The iMac has an image problem of not being powerful enough, but having a clever design that looks good in offices. Once an editor has worked with FCPX on one of these, it will be hard to go back to an ageing Mac Pro. (Don't we know it!)

Should the top of the line iMac be called a Mac Pro? Well no, as we know that Tim Cook has told us that a new model is coming later this year. It's going to have to be a monster to steal the 'best for FCPX' crown back from the iMac.