There are a lot of text plugins for Final Cut Pro X put there, but what do they do? Peter Warner from UsefulFX shows us how to duplicate the look of text in current movie posters by using his recently launched TitlePunch plugin fro FCPX.

Following their release this year of their Nostalgia set of effects, UsefulFX recently introduced Title Punch. By combining Text Styles and Effects, Title Punch inhabits a unique creative land by exploiting the alpha channel (transparency information) of any clip, still, or text object.

When you’re looking to add character to your titles, grunge typefaces like Cracked, Gaz and Octin can help, but unfortunately there is no variation: every letter A always looks like every other letter A. Another issue that diminishes the organic look occurs when you mix font sizes, as the creative noise scales along with the typeface. And finally – perhaps you want to grunge up Edwardian Script, as opposed to something from the bottom of a skateboard. Title Punch solves all these problems by applying textures to the entire text object:

UsefulFX is not a fan of canned looks, so their templates make it easy to discover ‘Happy Accidents’. You’ll find the effects in Title Punch to be rich in parameters to help you develop your own unique look. To demonstrate, let’s see if we can mimic some of the current grunge-style film titles from the Apple Movie Trailers page.

The practice of static title art design is specialized, utilizing software that can manipulate fonts more than Final Cut Pro X – but FCP X does allow for per-letter kerning and baseline control, which is critical. Attempting to match a title quickly reveals how much custom tweaking is needed, something that cannot be baked into a template. Also, we limited ourselves to only the fonts that come standard on a system. Full disclosure: we’re embarrassed to admit we had to use Impact on occasion. You have been warned.

The 9th Life of Louis Drax

The most difficult part of this title was the font layout - in fact, we skipped part of it. But the effects part came together quickly by applying the Disintegrate template. The original version is on the left, and our version is on the right. All Timeline snapshots include the reference image we used to compare the title against.

We created a Basic Title to start, which was used for every example in this article. We had to do some heavy tweaking of the kerning on a letter-by-letter basis:

Note particularly the ligature on the U and the I, for example. DRAX is also a smaller size than LOUIS.

For a bit more in-depth attention, we attempted to get a bit closer to the texture on the original, so we went and dug up an appropriate image: 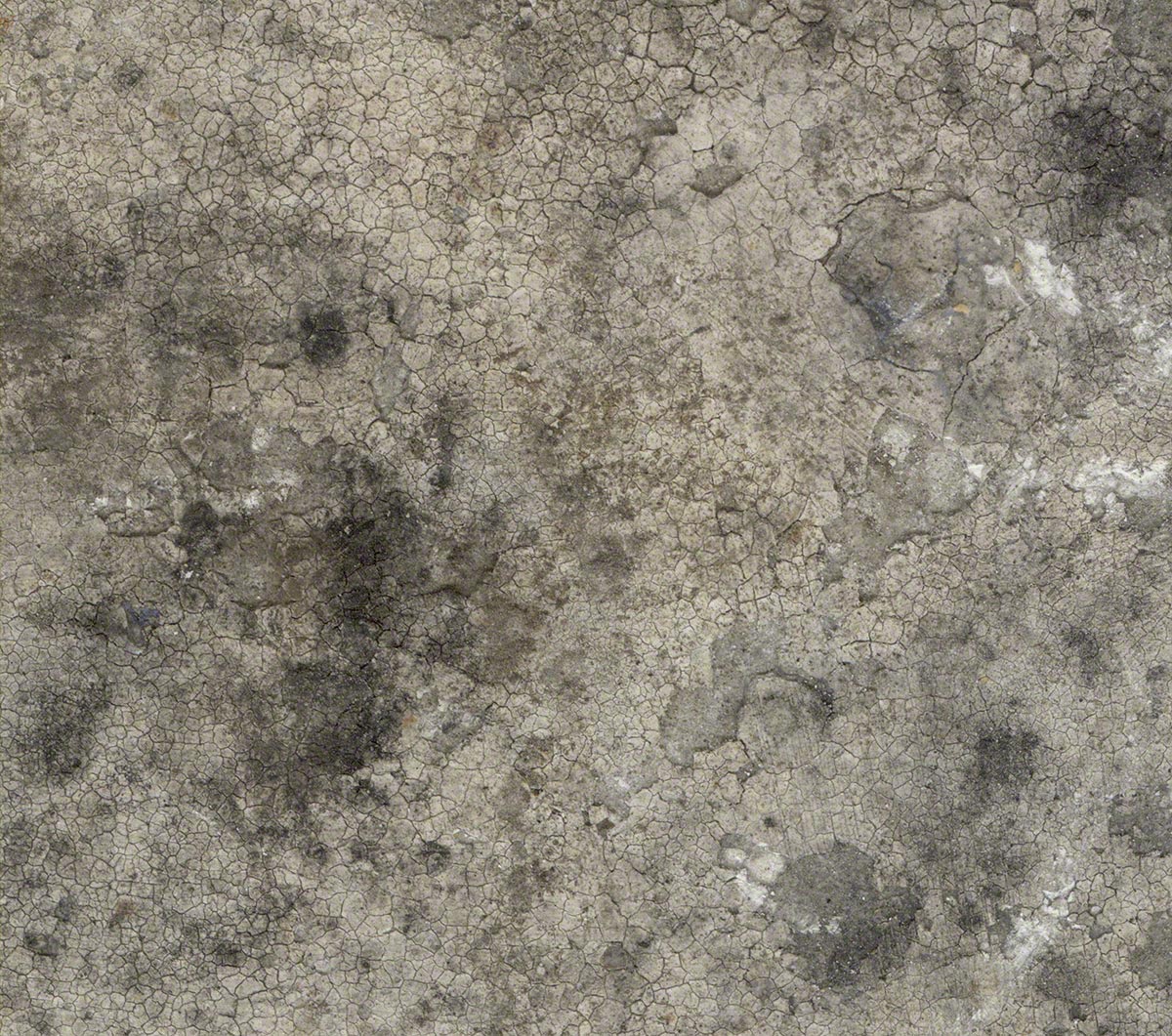 Here, the only thing we changed was we’ve set Texture to Drop Zone, and then fed the above image into it:

This one worked pretty well off the bat by using the Disintegrate title again (original on top, reproduced on the bottom)

The keen observer will note the nice outlining in the original, something that wasn’t preserved in our 30-second version. To solve this, we did the following:

This one is is also similar except we had to make our own texture map - Google just couldn’t quite cut it. We’re embarrassed to say we used Impact for the font.

Here’s the texture map we created with a compositing app. Yup, you have full permissions to use it. 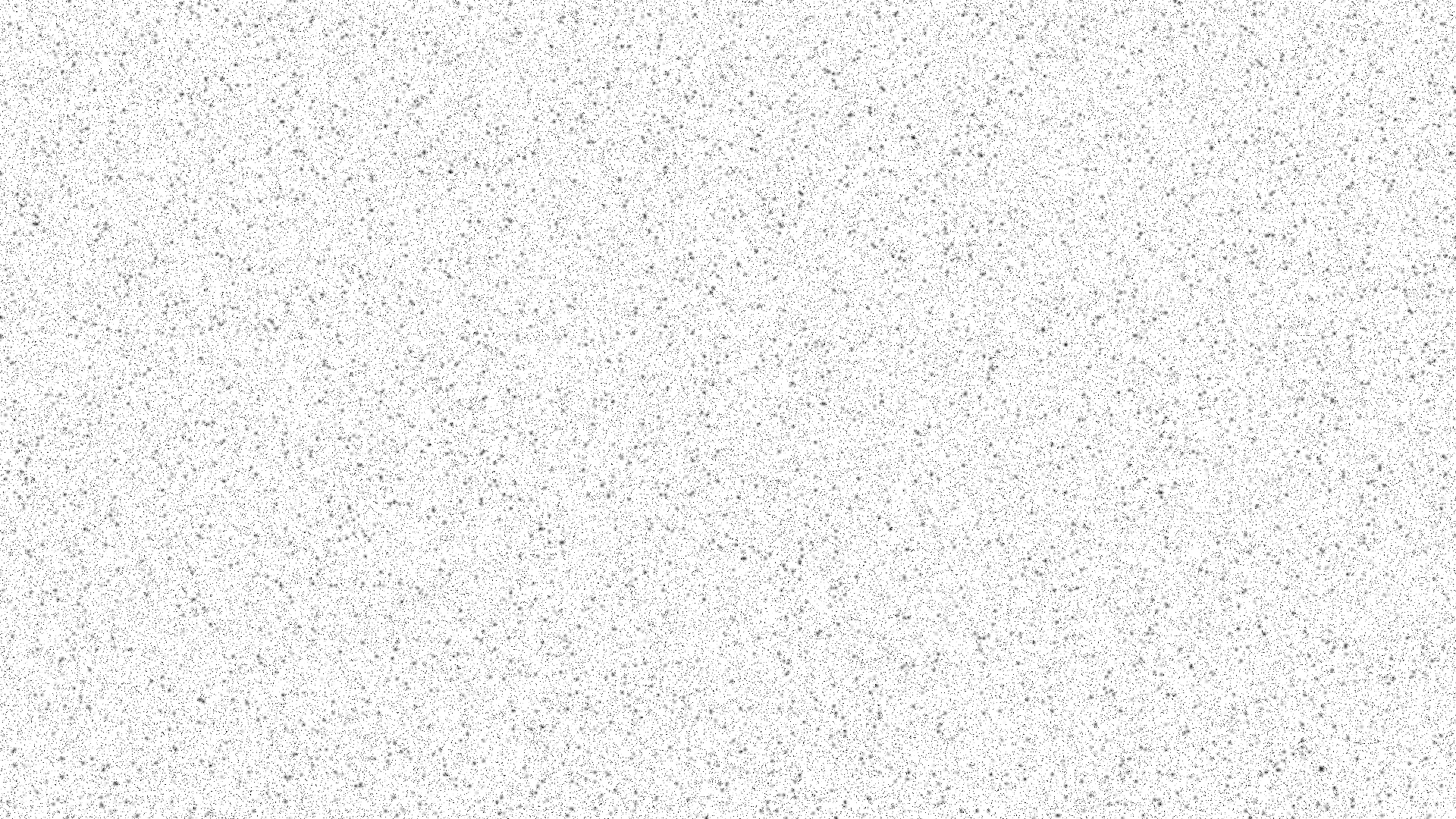 To move the “of” up, we selected it and tweaked the Advanced - Baseline parameter.

You’ve probably noticed the masked edge along the bottom. Obviously the template couldn’t anticipate all variations, so we found an appropriate image of Ripped Paper (yes, that was the Google search), and used it as a hold-out matte with a Lumakey and setting the Blend Mode to Silhouette Alpha: 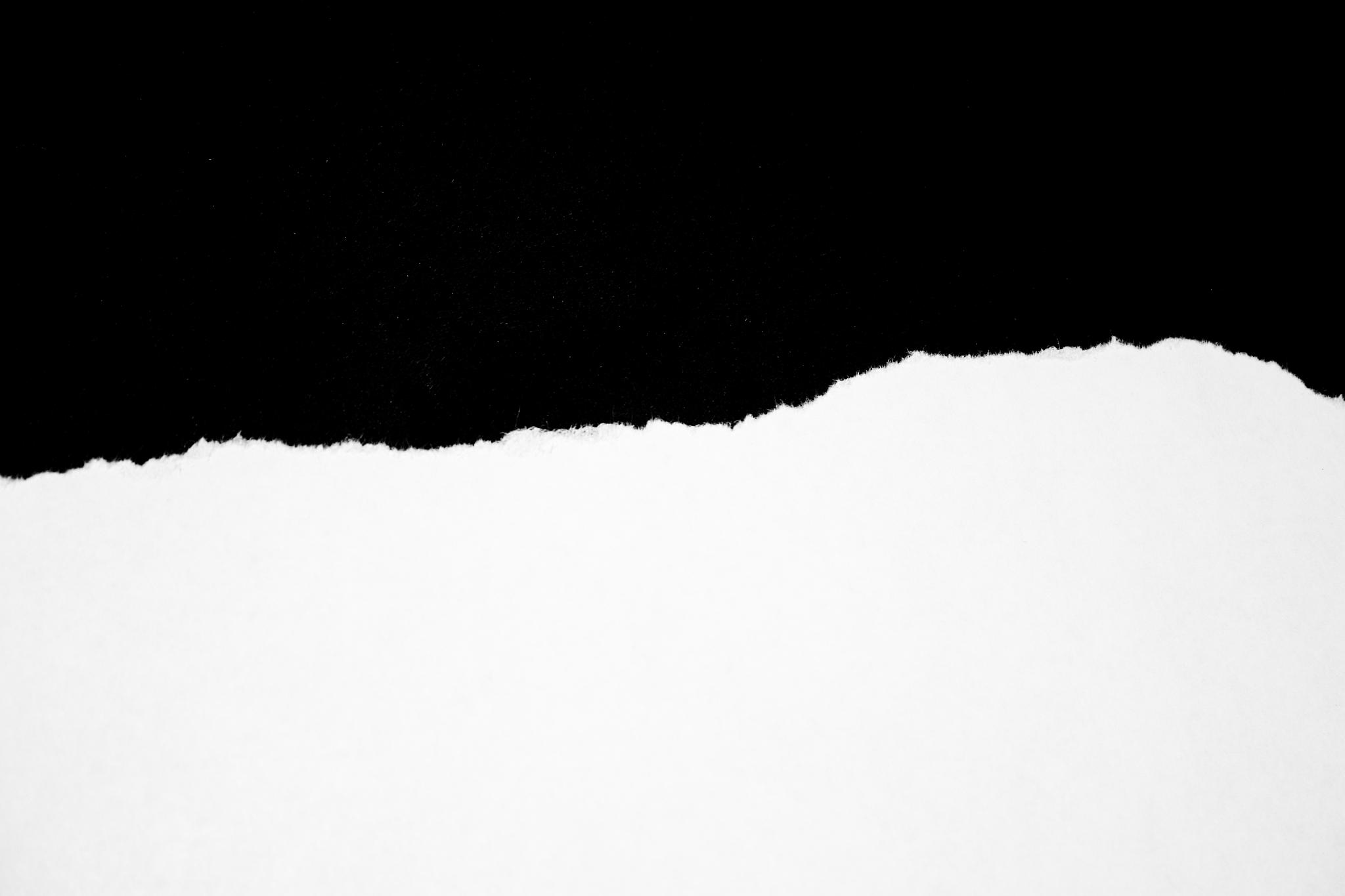 Here's the mask image we used:

However, you’ll note that this masks out everything below it. To fix this, select the mask image of the paper and the title and then you’re unfortunately obliged to make a Compound Clip:

We used the same technique, using an appropriate grass image for our mask and using a color Keyer to pull the mask. Note the Invert button in the Keyer can be handy in these situations.

This one suffers, as we couldn’t find an appropriate font - Synchro Let looked a bit too obvious, so we went with a more nostalgic look of Courier New and the Screened effect. Otherwise it’s pretty straight-forward:

Another one hampered by not having quite the right font. There’s also a bias in the original to put the grunge on the upper half of the type, which we haven’t reproduced. One could also substitute in another texture map but we felt OK with our 30-Second Result:

This one seemingly came out pretty well far right away: 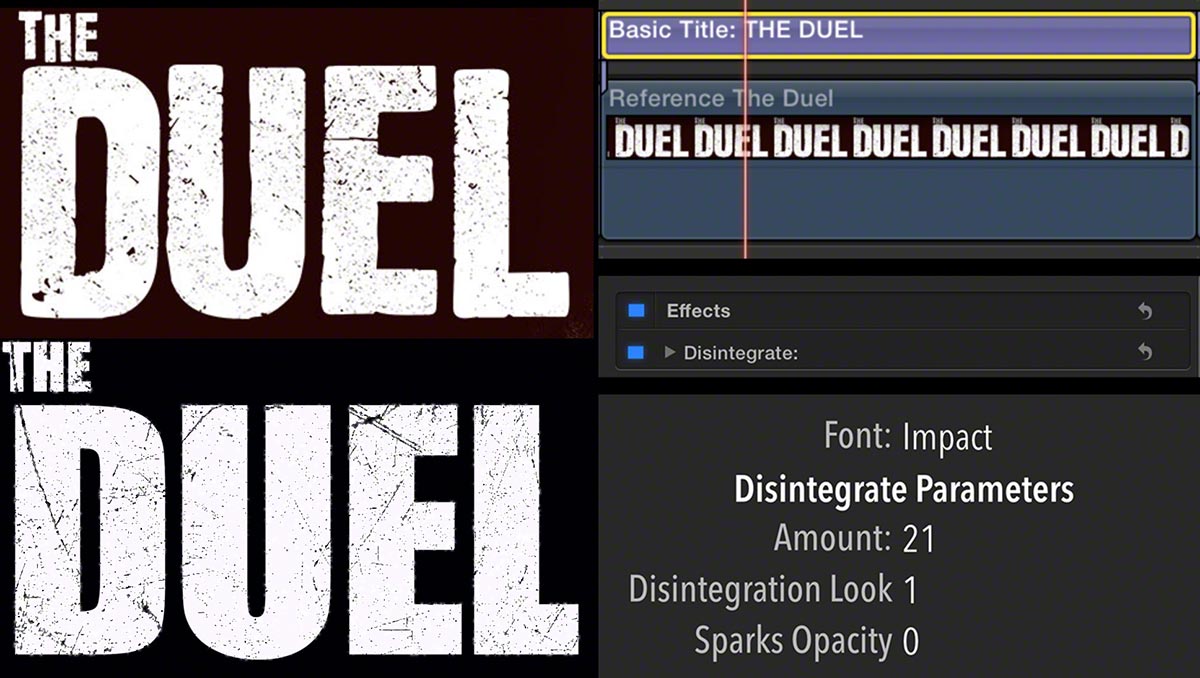 You’ll note the original has nice distortion on the edges. To get this, we inserted another Title Punch effect, Decay: 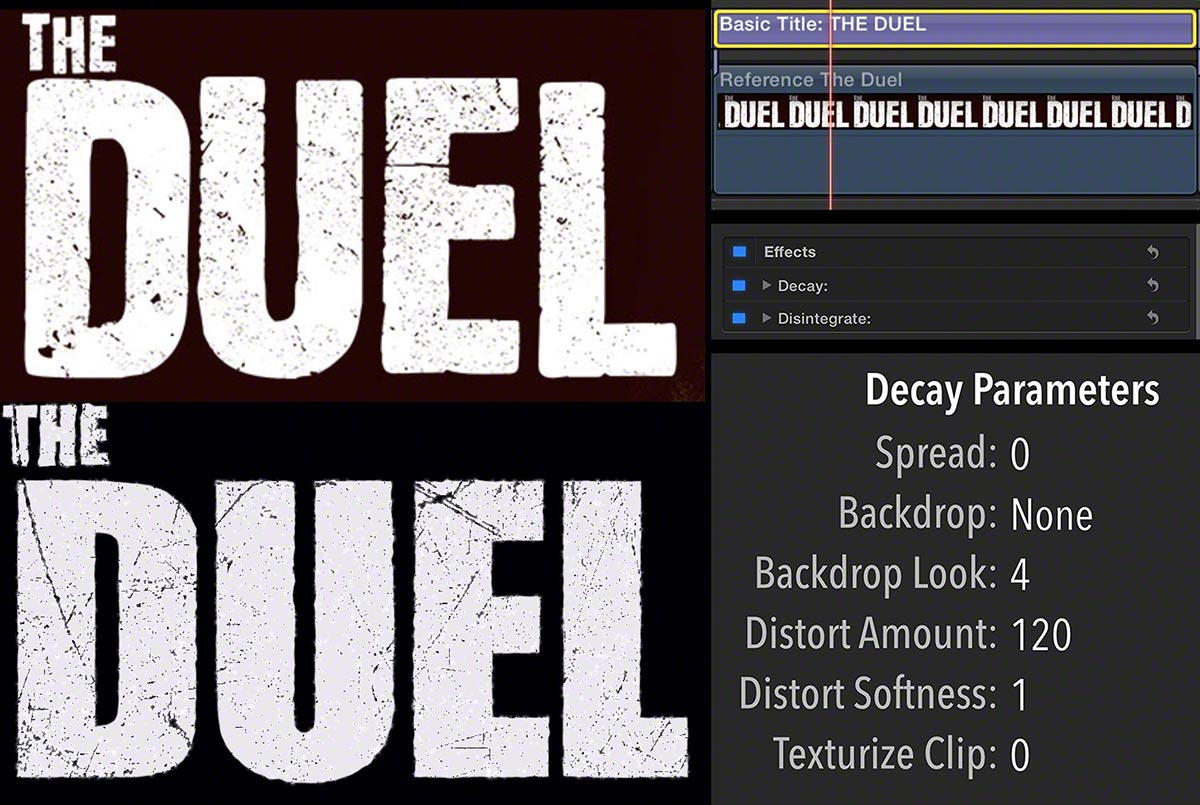 This came out pretty well with Disintegrate (once again), with the difference here being a Gradient Generator placed on top and set to Radial mode:

The above example, however, has scratches that are completely black, and there’s no fade slider. We therefore removed the Disintegrate and applied a Hole Punch, and fed a scratched metal texture into the Drop Zone, and then tweaked its exposure values with a TriTone (my go-to color-corrector)

So that was 8 titles that were pretty straightforward to mimic. As we said before, obviously a major campaign will spend (one hopes...) more than 30 seconds on their typography but these came out pretty well, despite our use of the limited typefaces. We used about 3 templates here, but there is a total of 28 effects, transitions and titles in Title Punch, so we only scratched the surface here. We encourage you to take the entire Title Punch set for a spin for free trial via FxFactory.