Jordan Smith wrote to us with a link to his article on sharing Final Cut Pro X projects. We liked the article so much, we asked if we could reprint it here on FCP.co. So if more than one editor is going to be working on the same project, read on...

Over to Jordan Smith from Phantom Moose.

A lot has been written on the subject of how to share Final Cut Pro X (FCPX) projects. Some say it can’t be done. Others say it can be done, just with caveats. I’m here to tell you that after much experimentation, I have figured out how to make FCPX do pretty near precisely what FCP 7 does for media management.

Let me set up what I need to do. My upcoming project, Month of the Novel Season 2, is planned to be edited on FCPX by two editors, myself and my co-editor Ruth. We are both long-time users of FCP 7, and we used it to edit Season 1 of the show. Before we could switch to FCPX, I needed to find out if a few things were still possible. Here’s our workflow from Season 1 that we’re hoping to keep for Season 2:

Ruth and I are very collaborate editors. We often make changes to each other’s edits, and we tend to divide work according to individual strengths when it comes to creating additional media such as titles, visual effects, and so forth.

This posed a problem where FCPX was concerned. I had been led to believe from the sharing tutorials I’d found that it was impossible to add media to a shared project after initially copying the event. I didn’t want to deal with making a new event to send every time I added another file to the project, but that seemed to be the only option. But it’s not! I recently spent a few hours extensively testing how FCPX handles sharing, simulating two different computers with a couple of external hard drives that I could completely unmount. Here’s what I found out.

Duplicate the Project and Event Files 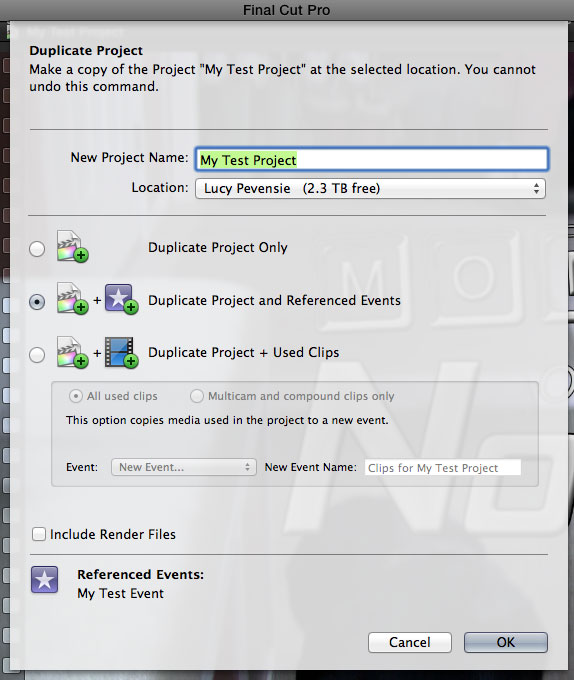 As was shown on an excellent episode of MacBreak Studio, the first thing you need to do is make sure you’re duplicating the event in FCPX, not in the Finder. You can do it the way they did it, duplicating the event and making a project later, or you can do what I did, which is to duplicate the project in FCPX.

If you already have a project created, this is a good option, as FCPX will copy both the project and the event to the new drive, saving you a step. Also, this way, you can exclude the render files and speed things up a little bit (FCPX will just re-render on the new drive; not a big deal since it all happens in the background now.) 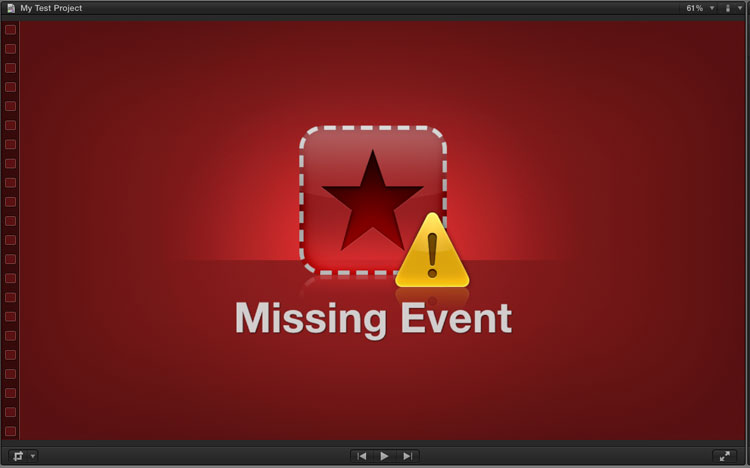 Once you’ve shared the project file with another person, something happens that’s not covered in that helpful episode of MacBreak Studio. When you launch the project, you may end up with a media offline error, even if you have all the files in the same event. Don’t worry; it’s okay.

Go to the Project Browser and right-click on your shared project. Choose “Relink Project Files…” and step through the process. Don’t pick just one file; that’s the slow way. Hit the “Locate All…” button and navigate to the event on your drive. Pick the file FCPX is asking for and reconnect it. It’ll pick up everything else in the same file path. 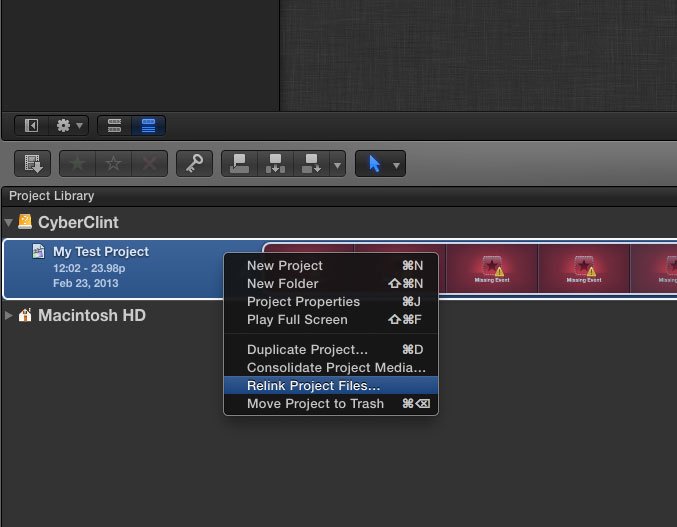 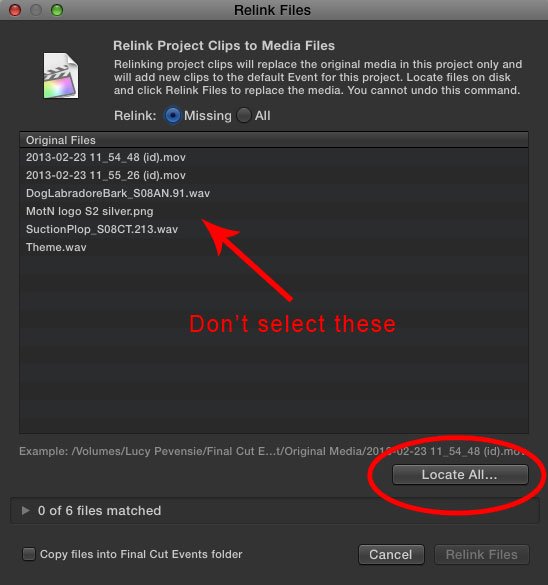 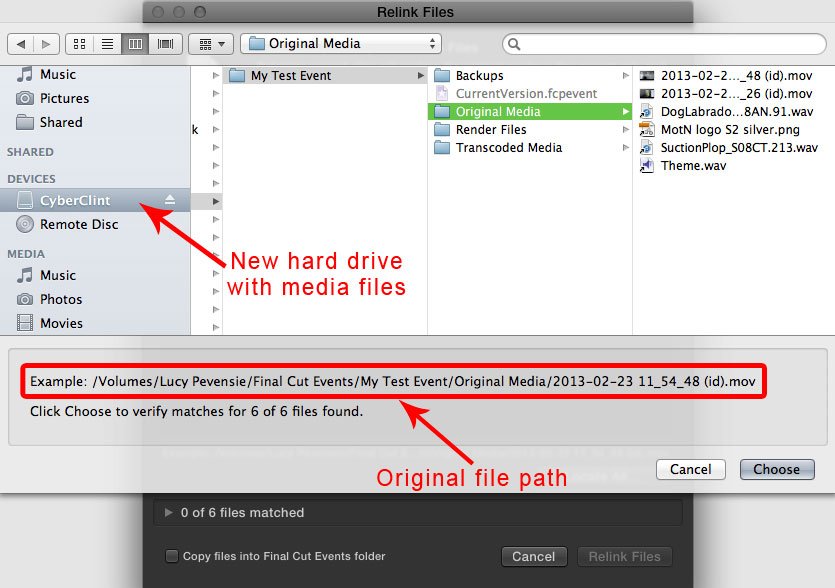 Let’s say I want to add a new clip to my project. I’ve put together a new opening title graphic in Photoshop that I’m going to us. I import it into my project and it goes into the default event.

I’ve chosen to create a new folder of additional media files for this project, where I’ll store all the new stuff either editor creates so I can keep track of it. When I bring in the files, I make sure FCPX isn’t going to copy the files into the event folder. Instead, it creates symbolic links to the original files in my other folder. 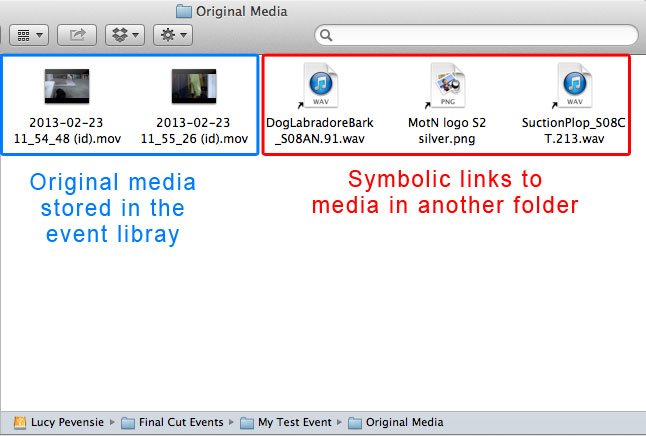 (Side note: Make sure your default event makes sense for the project! While I was testing this, I had some settings flipped and ended up importing media into the wrong event, which caused some chaos when reconnecting media.)

Now I can just add the new file to the timeline, then give the new version of the project (CurrentVersion.fcpproject) to the other person. Of course, I’ll also give them the new opening title file so they can import it in the next step.

Just like before when we reconnected the media, we’re going to go to the Project Browser and bring up the Relink Project Files window. Select the new files from the folder (once again, tell FCP X not to copy the files to the event folder), then reconnect. FCPX makes new symbolic links in the event folder, and you’re all set. The project should be reconnected. 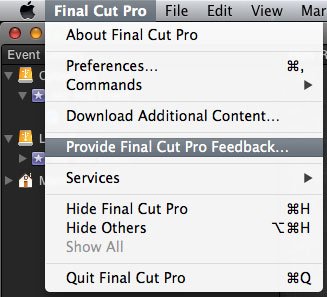 I’ve only found one problem with this so far. Compound clips don’t seem to translate when sharing projects, and FCPX unfortunately requires both the compound clip from the event and the source files that are inside it.

This is problematic, as to make FCPX happy, you need to copy the compound clip over to the other person’s drive from inside FCPX. So, as far as I can see, the only way around this is to avoid using compound clips in shared projects. I recommend using the “Provide Final Cut Pro Feedback…” menu item to tell Apple you want this fixed if it bugs you like it does me. I’m certainly planning to send them a report.

And there you have it! Once you know how, it’s simple to share a project between editors in FCPX. In some ways, it’s even simpler than FCP 7, because if you keep everything in the same event, you’ll be reconnecting media each time with just a few clicks, rather than searching over multiple locations for different sets of files.

A big thank you to Jordan for letting us reprint his great advice. Why not give him a thumbs up like on the Phantom Moose Films Facebook page.