So here is the scenario. After a long week editing, you are having a well deserved drink at your local and you get a call from a producer who can't work FCPX. How do you guide them through the buttons & menus from memory? Don't worry, you have the Navigator app on your iPhone.

We have all had the phone call from a producer asking for help, Yordi CapÃ³ describes the familair situation: "My friends call me up when they have problems with Final Cut. Sometimes I'm not near my computer and I can't remember exactly which button they have to click. I made this iPhone app so I can help out my buddies!"

His $1.99 iPhone app, Navigator Final Cut Pro X Edition lets you see what buttons do when pressed and what options are available from menus. This is a stroke of genius as not only will it help in talking producers on FCPX 'down to land,' it will also help as a quick & handy refresh of functions for all editors.

"This is the closest thing to having Final Cut Pro X on my iPhone!" - Tech Guy

"Sometimes, when I'm on a plane, I just want to go over the Final Cut buttons and functions without taking out my laptop. I even discovered some functions I didn't know existed while laying in the park with my iPhone." - Student Filmmaker

"Sometimes students stop me in the hall and ask me about Final Cut Pro. I can quickly show them the answer on my iPhone" - Final Cut Teacher 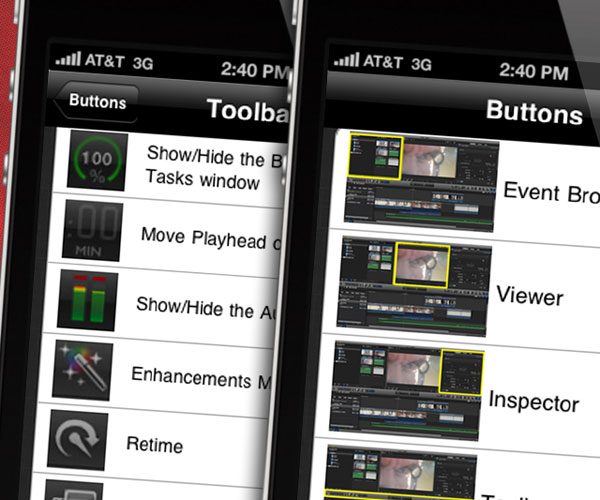 Yordi's 'day job' is a a director and editor in Guadalajara, Mexico along with working as a teacher of post production at two universities. If he wasn't busy enough, he got into iPhone app development as a hobby!

We think his Navigator app is going to be a hit as we think it follows the popular visual way of learning pioneered by Edgar Rothermich's graphically enhanced manuals.

This is not Yordi's first navigator app, he has also produced a similar iPhone app for the Canon C300. We think you just might see a few more of these apps appearing from Yordi - Premiere Pro? Avid?