New to the market plugin maker ReelPath have launched two new FCP plugins on the Mac App Store. bounceIt! and springIt! are $25 dollars each.

When we say new to the market, we don't mean new to Final Cut Pro as these two plugins have been written by Tom Langmacher who used to be a designer on the Final Cut Pro team.

Langmacher joined Apple in 2001 when his company Prismo Graphics and the intellectual property was acquired by the pro apps division at Apple. As a result of the acquisition, the original India Titler application from Prismo became LiveType and served the Final Cut Pro suite for a number of years. Langmacher and his team were responsible for the content that ships with Motion since inception and was one of the instrumental designers and proponents for the rigging technology currently in Final Cut.

So let's take a look at Tom's new plugins from Reelpath, bounceIt and springIt. Two things that are of immediate interest to us here are first of all the delivery method via the Mac App Store and secondly the very clever way the custom onscreen controls have been incorporated into the templates.

bounceIt is a $25 plugin written especially for FCPX that animates a picture or video with 3D simulations, edge collision and trails. It has 34 preset moves, but you can use these as a starting point to build your own. Unfortunately even the embedding talents of the Editor couldn't unravel the Javascript on the ReelPath site, so we will have to post some screen grabs instead of the demo movies.

STOP PRESS Tom has just emailed us the Vimeo links... 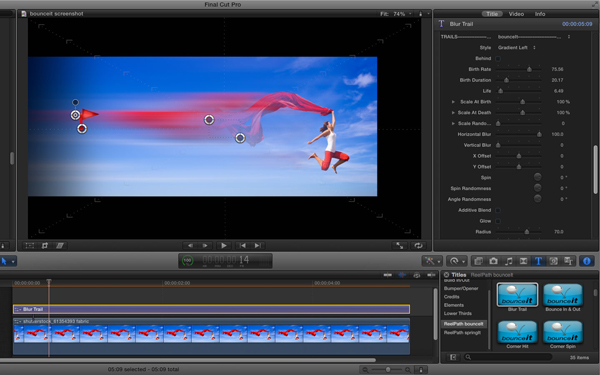 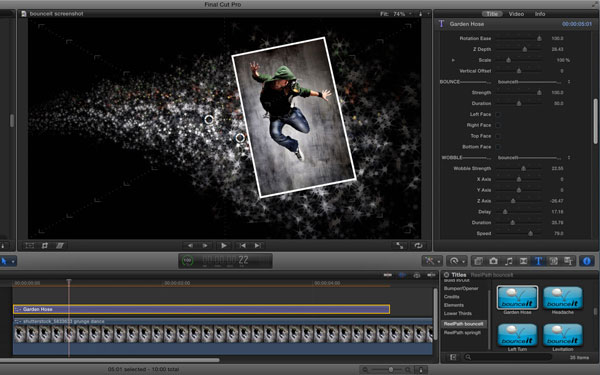 springit is very similar to bounceIt, but yes, you guessed instead of clips bouncing in, they spring in. Again the plugin comes with 34 presets to use immediately or customise yourself.

"Add your own unique creations to any project in any resolution and frame rate that Final Cut Pro X supports.Â· springIt! is easy to use. Just set the onscreen Start and Stop guides with XY Position, XYZ Rotation and Scale. No keyframes needed! Adjust the on screen Anchor Tool and choose from an unlimited range of automatic Spring transforms in addition to automatic Curl, Shear and Chaos. Add Trails to your animation using one of the 10 styles that come with springIt! including Particle effects. Mesmerize your audience with your next Final Cut Pro X production using the limitless possibilities of springIt!" 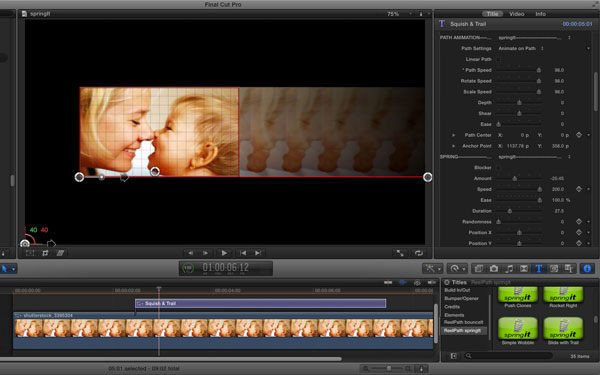 On Screen Start and Stop guides with Motion Path

â€¢ Add a Shadow behind your clip and control the Color, Opacity, Blur, Distance and AngleÂ· 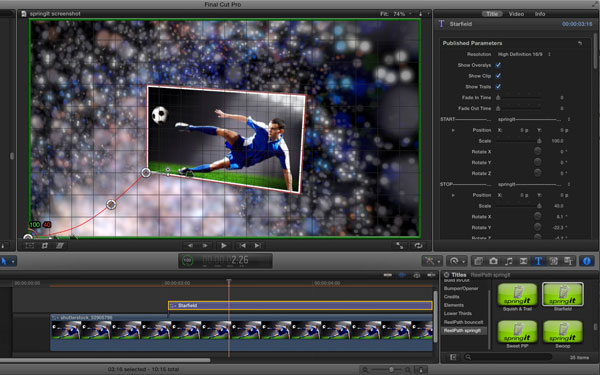