You're recording with a flat gamma curve on either an Arri Alexa or the Sony F3 with the SLog option. Pomfort have just released two new plugins for FCPX and Final Cut Pro 7 to get those files into Rec.709 to display correctly in FCP.

Shooting with a flat gamma has its advantages, more information is captured from the sensor which means you have more data in the whites and blacks for colour correction in post. Get those files into your NLE and they will look pretty flat, you need to convert the gamma curve to REC.709 for the colours to be displayed correctly.

Pomfort have had their Log2Video plugin on the market for a while now that converts the gamma for Canon DSLR's shooting with the Technicolor CineStyle picture profile.

Now they have launched two more plugins aimed at customers who shoot with either the Arri Alexa or the Sony F3 with the SLog option. There are free trials available for all three of the plugins on the website.

During that process the color processing can be influenced with printer lights and CDL-style controls called "ARRI Looks" for creative looks in the camera.

With this plugin you can work with material recorded in ARRI's Log-C directly in FCP without transcoding. The used color processing is implemented as specified by ARRI – it creates visually the same images as the camera with enabled looks."

The Alexa Look2Video plugin is $179 and can be bought directly from the Pomfort website. 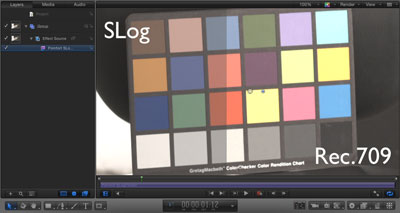 Therefore, you can work with material recorded in Sony's SLog with cameras such as the Sony PMW-F3 directly in FCP without transcoding.

The used lookup table is derived from the maths provided in Sony's white paper."

The SLog2Video plugin is $129 and can be bought directly from the Pomfort website.