Need some help under
cofe

The first day of FCPX. The news of the reviews of Final Cut Pro X

There can't be many people in this industry that failed to notice Final Cut Pro X was released today. We thought that we would take a look at the better articles and videos that have been posted.

First up is an excellent review from Steve Martin on Ken Stone's website. Steve runs Ripple Training and if that rings a bell it was his server that got hacked into and those old military FCPX screengrabs stolen.

Concise and well written it was probably the best 'A first look' article we have seen. Steve had the advantage of being able to write this review well before time and it shows. Essential reading.

"While FCP X will no doubt be referred to as a souped up version of iMovie by some, this is not my impression at all. I have been cutting a documentary on it among other things, and I just finished a tutorial that is close to 5 hours long which speaks to it's depth. I was very surprised at how much iron the Apple engineers put into it." 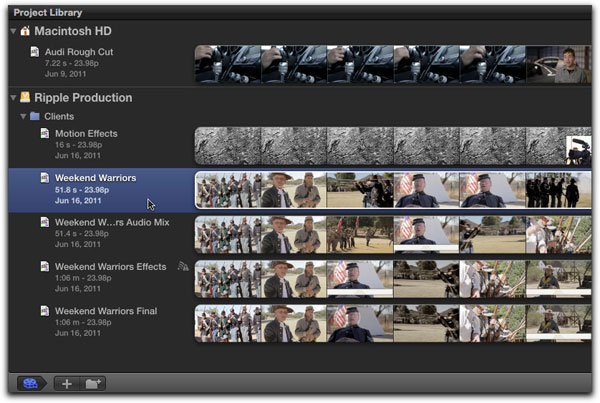 "While FCP X is very promising, it still lacks key features for professionals. (I'm cutting it some heavy slack because I'm taking into account this is essentially a version 1 product built on an entirely new foundation). But the fact remains that there is no professional audio editing capabilities. With many of the features of Soundtrack Pro now rolled into FCP X, I still long for a full featured waveform editor to perform bread-and-butter audio editing chores. This coupled with the fact that there is no built-in way to collaborate with sound editors using ProTools or other DAWs is problematic.

Also there is currently no support for 3rd party effects plug ins. This is something that most likely will be addressed in the future. That said, Motion 5 is now much more that a motion graphics application. It's now a motion graphicspublishing application and you can easily "publish" your own titles, effects, generators and transitions for any Final Cut Pro X editor.

From my perspective, FCP X is not so much revolutionary, but rather,evolutionary - because at the end of the day, your reasons for using Final Cut Pro have not changed - you're still using it to make movies. A re-invented wheel is still a wheel."

From the same stable, Mark Spencer took a first look at Motion 5 or The Top 5 new Features of Motion 5 as the article was titled.

"The new Motion 5 has arrived - and hereâ€™s the funny thing: while it looks radically different, contains features that represent a completely new paradigm, and will change the way motion graphics are created - it is at the same time no different at all. How can that be?" 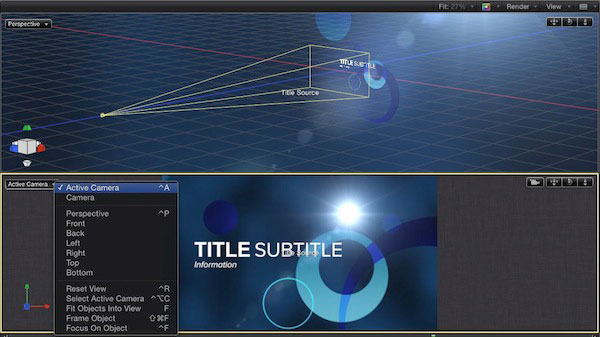 Mark sums up:  "If you are already familiar with Motion 4, once you understand how to put rigging and publishing to work, youâ€™ll have no trouble creating your own incredible titles, transitions, effects, and generators for Final Cut Pro X. And if youâ€™ve never used Motion before - you are probably going to want to start!"

Larry Jordan boiled it down to three words

"speed, power, cutting-edge" Isn't that four? Anyway he did post some more information on his blog, not an omlette in sight.

Then we drop into the people who we think had the beta a few days before release.

Gary Adcock's opening line was rather amusing on his review posted on Creative Cow.

He writes more detailed information about which cameras will work with FCPX, metadata etc. There's a part two coming soon.

Philip Hodgetts was lucky not only to have FCPX a week early, but Apple lent him a MacBookPro too!

"My overall impression is overwhelmingly positive. Right up front Iâ€™ll say that this first release doesnâ€™t support every workflow that every professional editor might need, but for the vast majority of people who donâ€™t have specialist workflow needs, this is an amazing piece of software. Iâ€™d much rather focus on what is in the application than the few features that are missing for the moment.

It made editing fun again. Fast and fluid. Did I mention fast?  I donâ€™t just mean 64 bit, OpenCL, Grand Central Dispatch, no-holdups-from-the-app fast, I also mean the tools are where I want them, thereâ€™s a ton of keyboard shortcuts and I can find my media and get an edit done fast!"

Then we have the people who have tested FCPX and written up their thoughts and findings after the release. 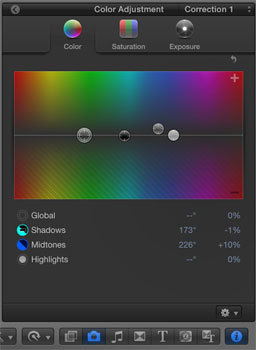 The Digital Cinema Foundry wasn't impressed by the autobalance feature.

"As a colorist Iâ€™ve had a great interest in what would become of Apple Color. Though its fate is still not known. I thought that upon first launching FCP X for the first time I would do some digging around with its color correction tools. In terms of workflow I have to say that it is better and more intuitive than FCP 7â€™s 3 Way Color Corrector as it incorporates similar approach to Apple Colorâ€™s hsl curves/lines found in the secondary room for hue, saturation and luma adjustments. I do have to say and it is the purpose of this post to point out that the Autobalance feature simply will not work or do the job adequately. And this is supposedly one of those auto background rendering features. I havenâ€™t dug around enough to find out how to disable it but the results will speak for themselves."

Matt's Macintosh got the award for being the first person to post a YouTube video of FCPX. He warns it is long and rambling!

Jared Abrams from Wide Open Camera even managed to edit a demo commercial and post it to Vimeo.

"Here is a very down and dirty edit of a Beetle Spec Spot we shot in San Francisco a little while back. I was lucky enough to get up early and download the new FCPX from the Mac App Store. FCPX is one bad ass editing tool. It feels similar to iMovie and is very similar in appearance. I was jamming to get this edit out and snagged a few screen grabs during the process. FCPX has a ton of killer features like Match Color, A three Way Color Corrector, Auto White Balance, ETC. Most importantly there is very little Import, Export or Render time. It is almost instantaneous! I am by no means an editor but I do have to edit every once in a while. This is going to save me so much time, I can only imagine how much it will save the real editors out there. FCPX is one of the best things to happen to Independent Film making since the DSLR. Dig it!"

Ooops looks like that is offline for a while, will a screengrab do? 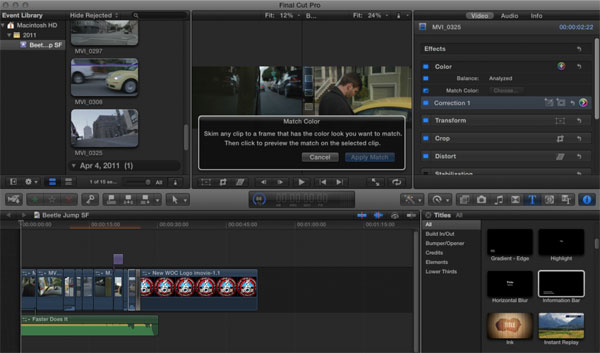 Congratulations if you've got down to the bottom, this is only the first day, phew!