If you are a regular reader on FCP.co, then you will be aware of Ripple Training's excellent range of tutorials for FCPX and Motion. They have just released a trial $1.99 iPad app based on the 10.0.6 update and they're after your feedback.

Yes you read the price right, $1.99, although other apps in the future will be priced at around $19.99. So if you haven't bought the iTunes delivered version, then this is a great way to get all of Steve Martin's 10.0.6 knowledge for less than the price of a beer!

The app is called iPlayerPro and once downloaded it doesn't require to be connected to the internet to view the tutorials. It's quite a hefty size as you would imagine and took in between 5 to 10 minutes to download on our wifi.

So why make an iPad app? Steve Martin explains:

'Our training is offered on the Mac or PC via iTunes and while perfectly workable, there are still those that would prefer forgoing the computer middleman altogether and download our training directly to their iPads.'

And what are the differences between the iPlayerPro versions on the App store and the training you offer on your website?

"The iProPlayer version of a given training title will only play on the iPad. You cannot cannot transfer the movies or any of the data to your Mac or PC.

The iProPlayer version does not come with the hands-on media.

The iProPlayer version has a horizontal video resolution of 1024 (vs. 720 and 1080 versions offered on our site)"

The training apps are also going to work out cheaper if they are regularly priced at $19.99.

We suppose what Ripple are doing is offering the customer more choice on how they can purchase and watch the training. This must be a good thing for everybody as there is no way that printed resources can keep up with the pace of FCPX's development. Having a tutorial running on an iPad whilst you have Final Cut Pro X open on your computer must be one of the most efficient learning setups possible.

So please let Steve know what you think about this move in the comments below, he's after your feedback which we think will be very positive. 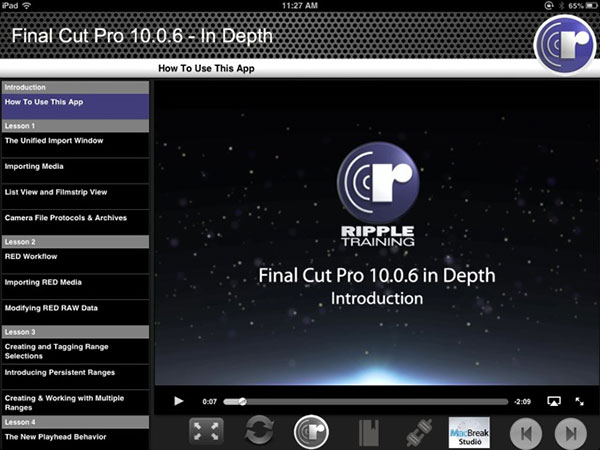