We are back from NAB, we have got over the jet lag, so time to delve back into our photos and notes and round up our thoughts about NAB from day two onwards.

Part two in our roundup from NAB and rather a sad one as Final Cut Pro X was hardly visible on the show floor. Apple hasn't had a presence on the show floor for a long time. The volume battles across the aisle between themselves and Avid have been replaced by demo fights between Blackmagic and Adobe. Shout it out loud indeed!

Whilst on the subject of crowds, it is interesting to see another decline in attendance figures for the show. The dip from the previous year is not as great as the year before, but it is still a trend.

Maybe this trend has caused the organisers to bring the show dates back a day, The 2020 NAB show starts on Sunday April 19th and it runs until Wednesday April 22nd. 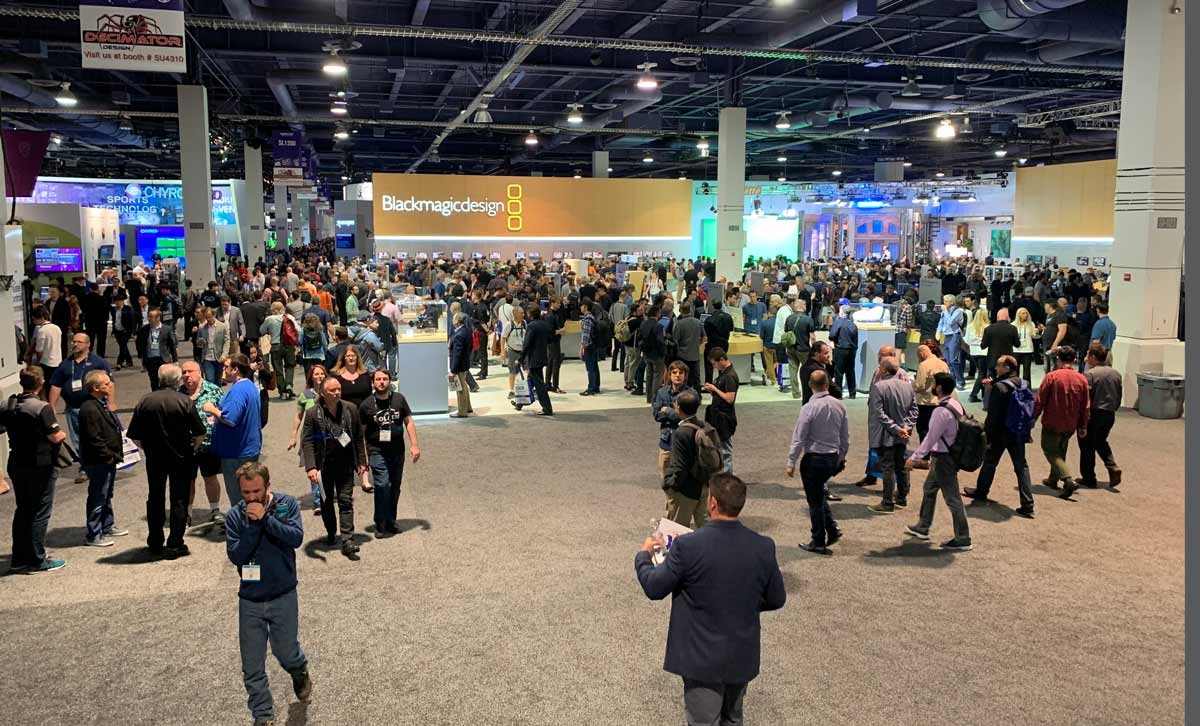 So with no FCPX to watch or tinker with, we had to be interested in the other stands, mostly on the ground floor of South Hall. 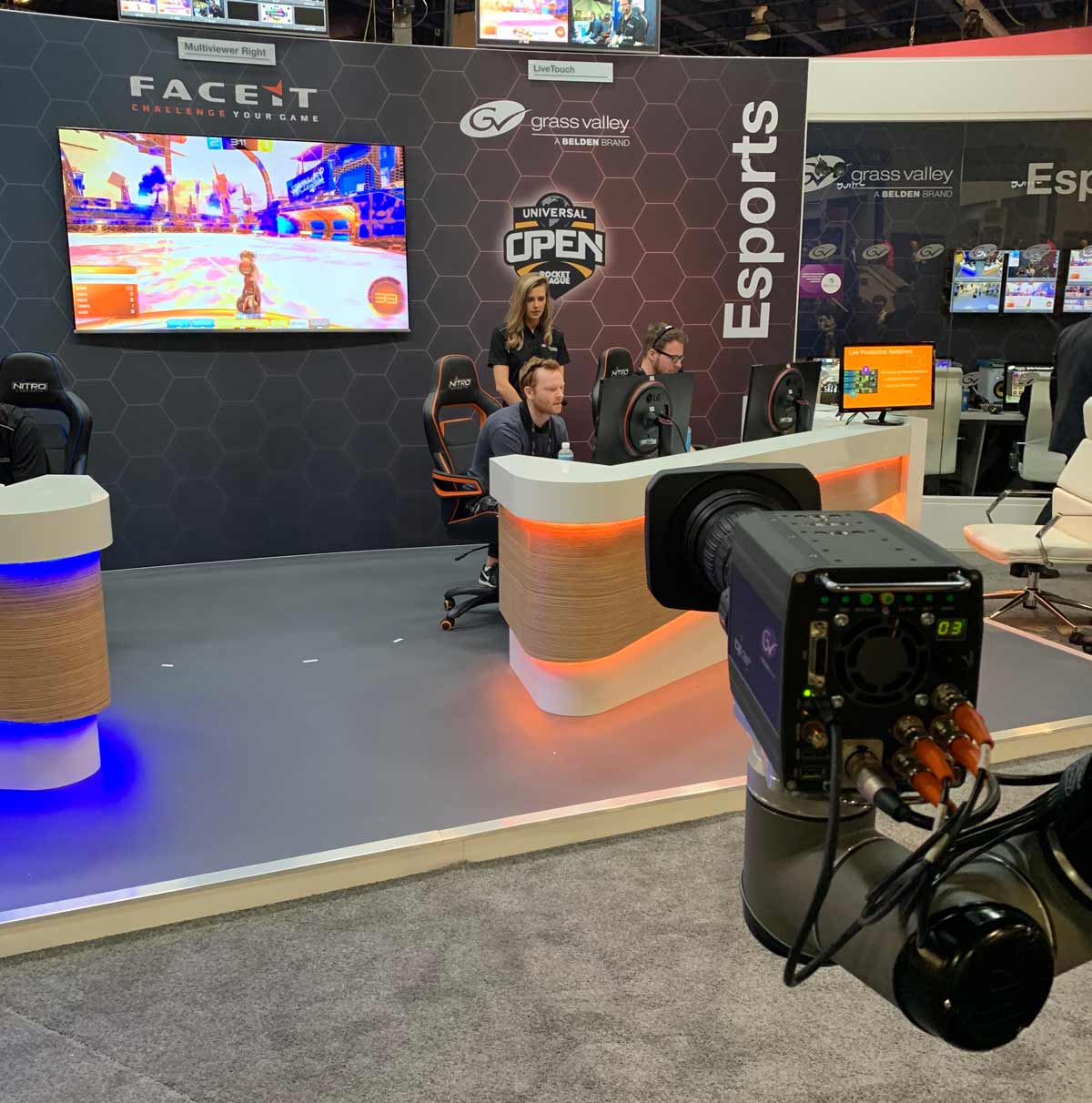 Grass Valley were going big on Esports coverage. This is the view that greeted visitors once they were through the doors and down the steps. 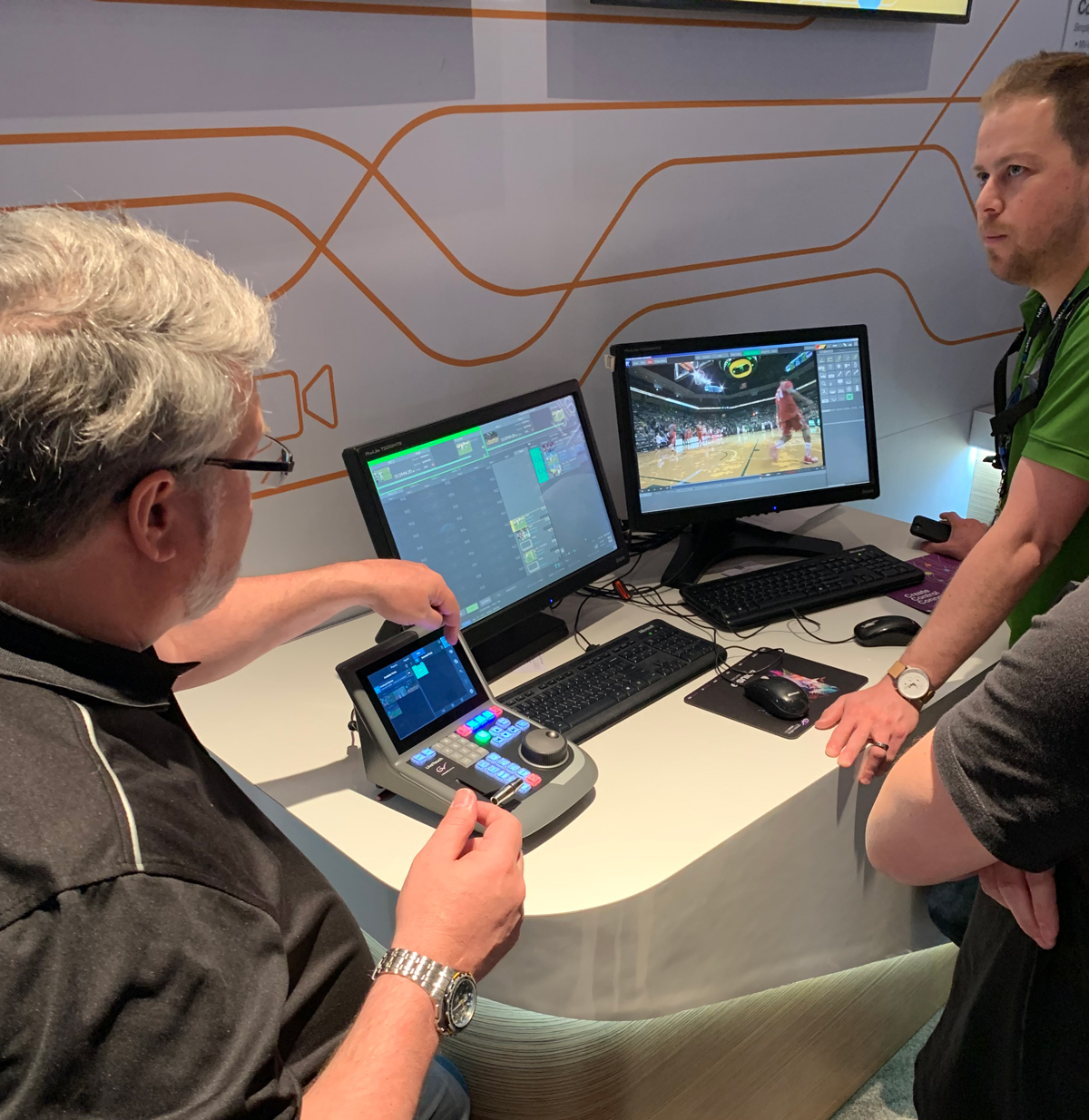 Although still the first choice for many broadcasters, EVS is now seen as expensive, especially for 4K. So there were many different replay systems on offer, this is LiveTouch on the Grass Valley stand. It doesn't support any ProRes flavours. 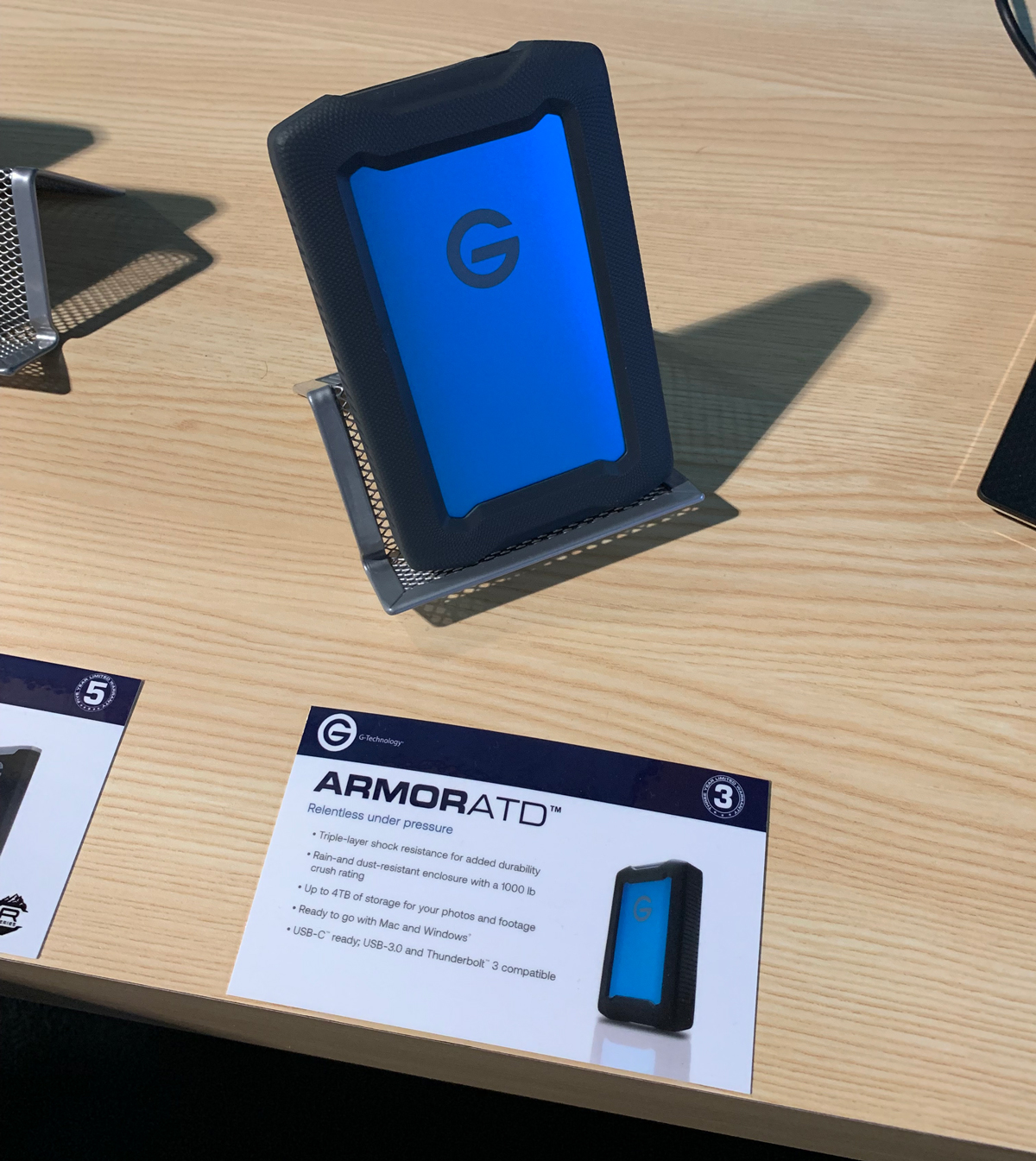 New from G-Technology was the ArmorATD. A toughened-up spinning disk storage device with capacities from 1 to 4TB. Data transfer up to 140MBs with USB-C and Thunderbolt compatibility. 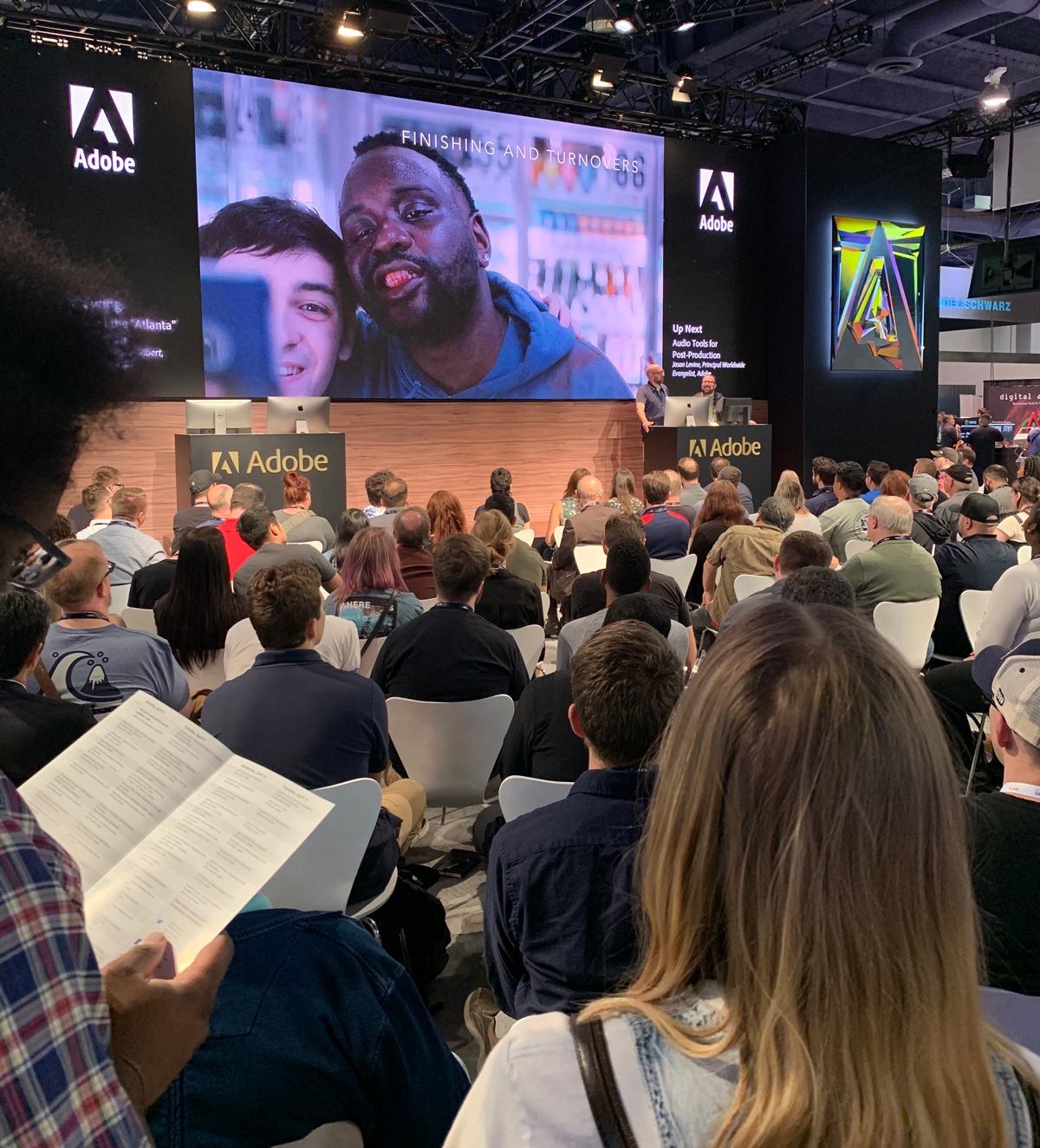 One photo for Apple to take note of. The Adobe stand was rammed with people watching the presentations. Amazing to think that eight years ago, Premiere had almost zero traction in the pro market. Just across the aisle was a well populated set of about 20 iMac Pros running drop-in DaVinci Resolve courses. 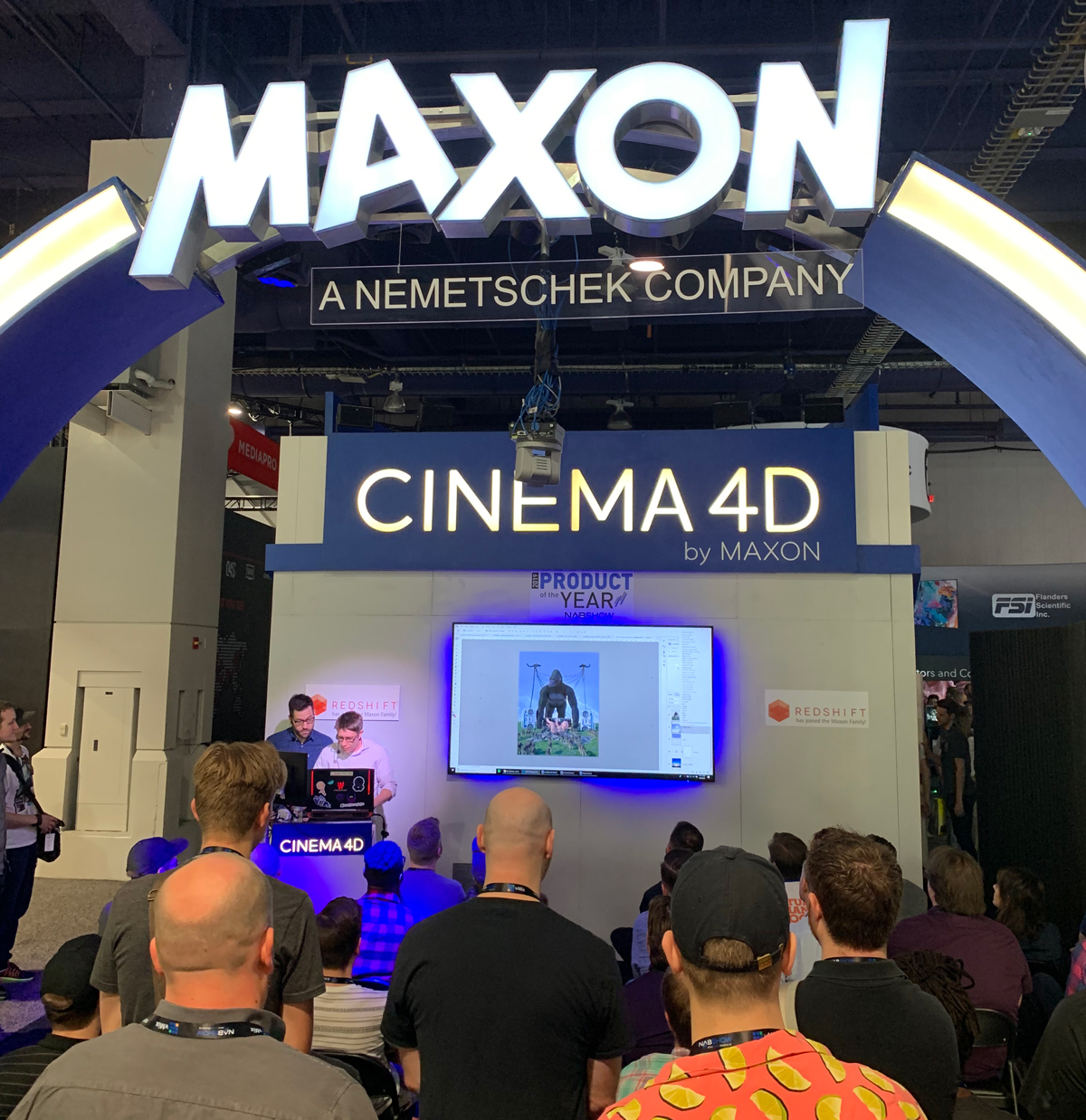 Another popular stand was Maxon, the developers of Cinema 4D. Their news was the acquisition of Redshift, the GPU accelerated renderer. 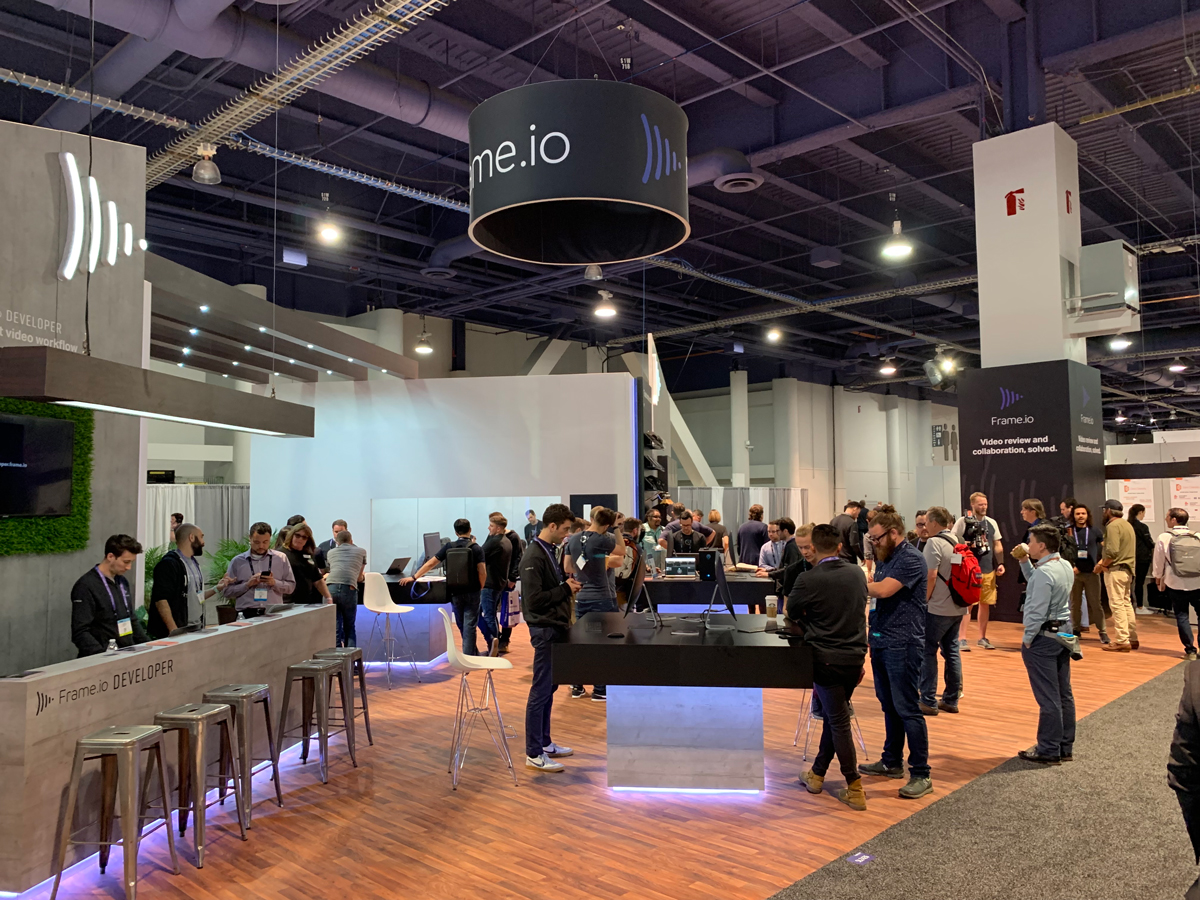 Tucked behind the AJA stand was Frame.io. They had some good presentations during the show, hopefully they will be made available online.

We also got to meet Thomas Szabo who we have known from the Clip Exporter days with FCPX. He was showing Frame.io running with DaVinci Resolve. It was incorporated into Resolve by Blackmagic using the new Frame.io API. 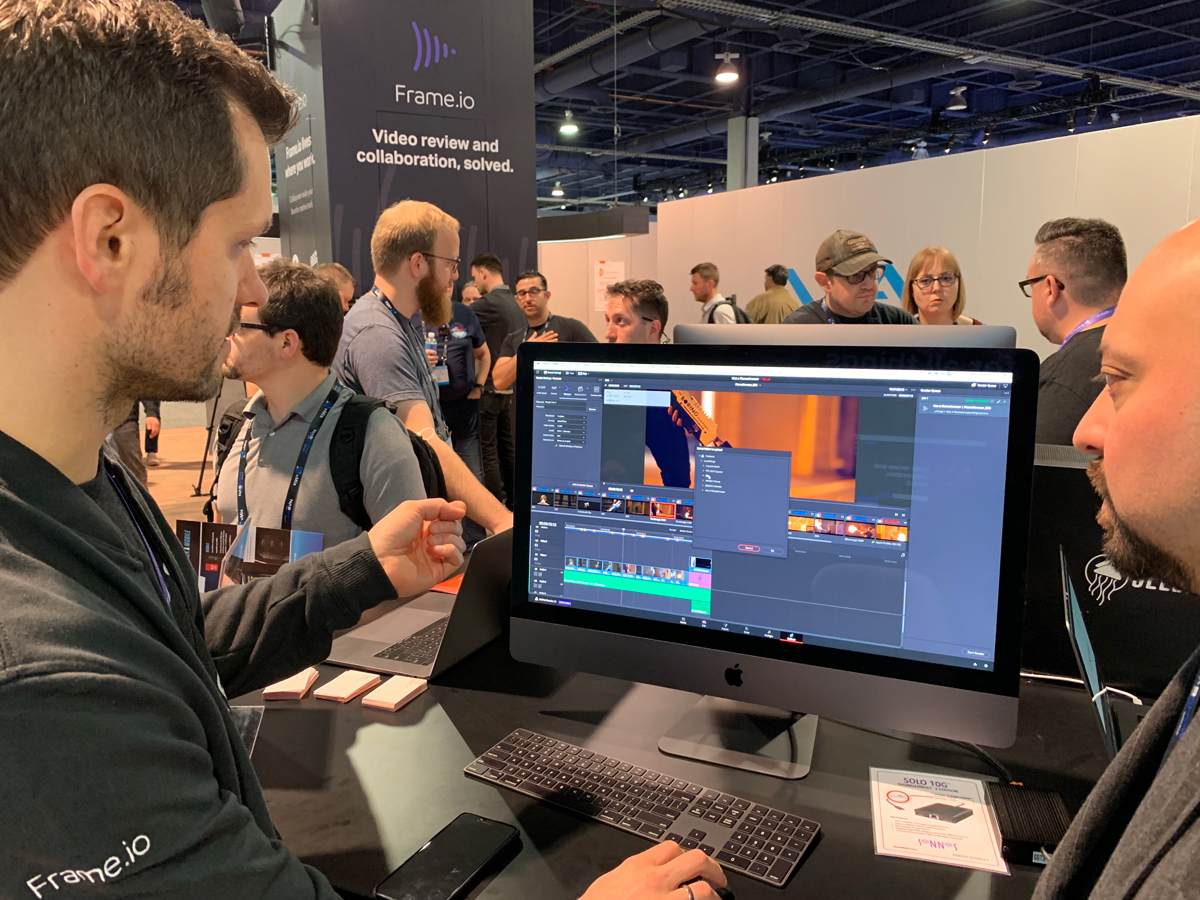 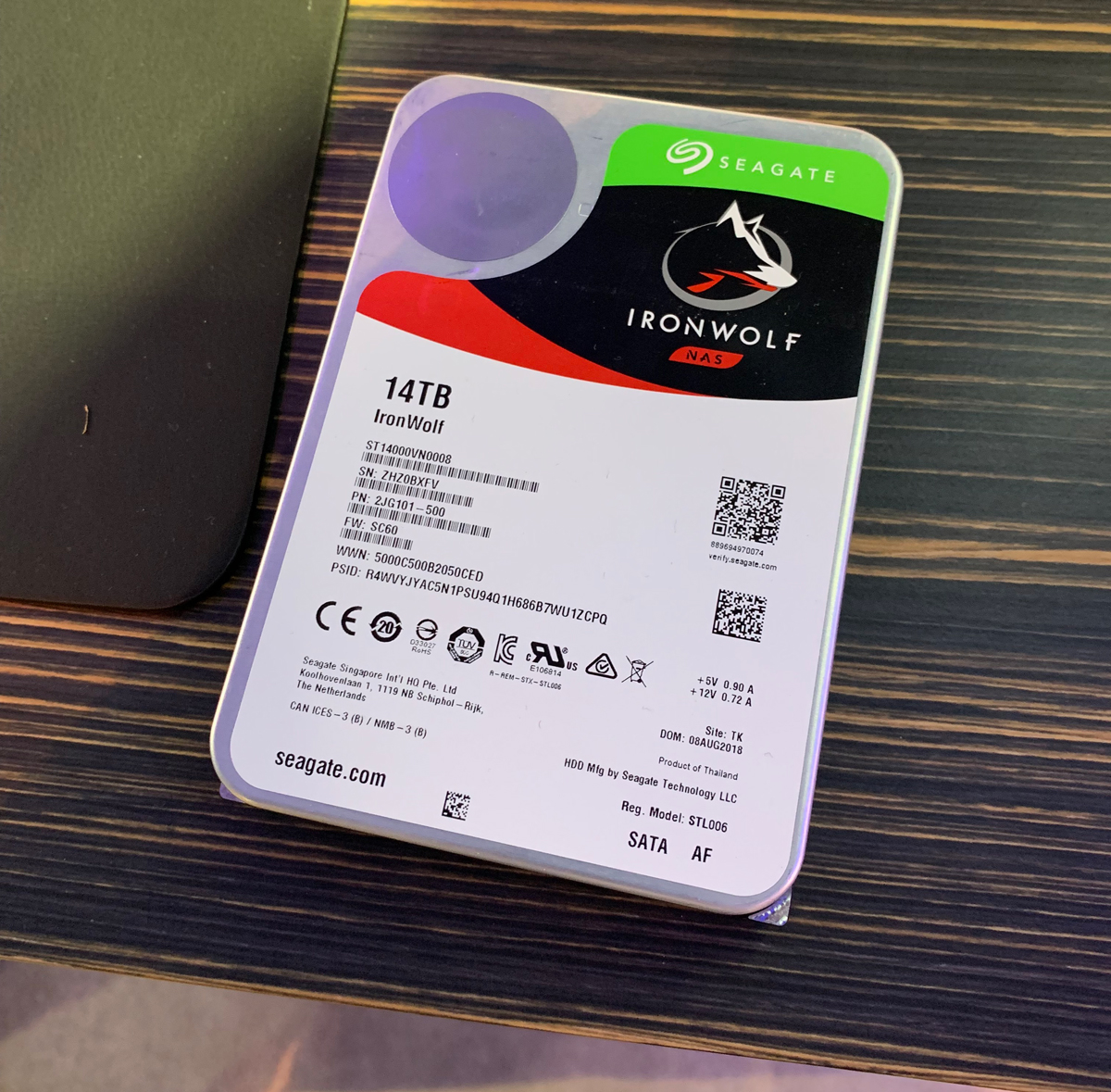 Thinking of building a NAS? Although these were announced back in September, this is the first time we have seen the Seagate 14TB drives. As they are the top capacity drives from Seagate, they are expensive, the plus is that they make the lower capacity drives less expensive!

Quite amazing to think this drive has almost three times the capacity of an XServe RAID when it was launched.

Amazing, but not as amazing as the robot that was throwing a LaCie drive through a water fountain into a mannequin's backpack. After half an hour of trying to get the embedding work with an Instagram video, we failed, sorry. 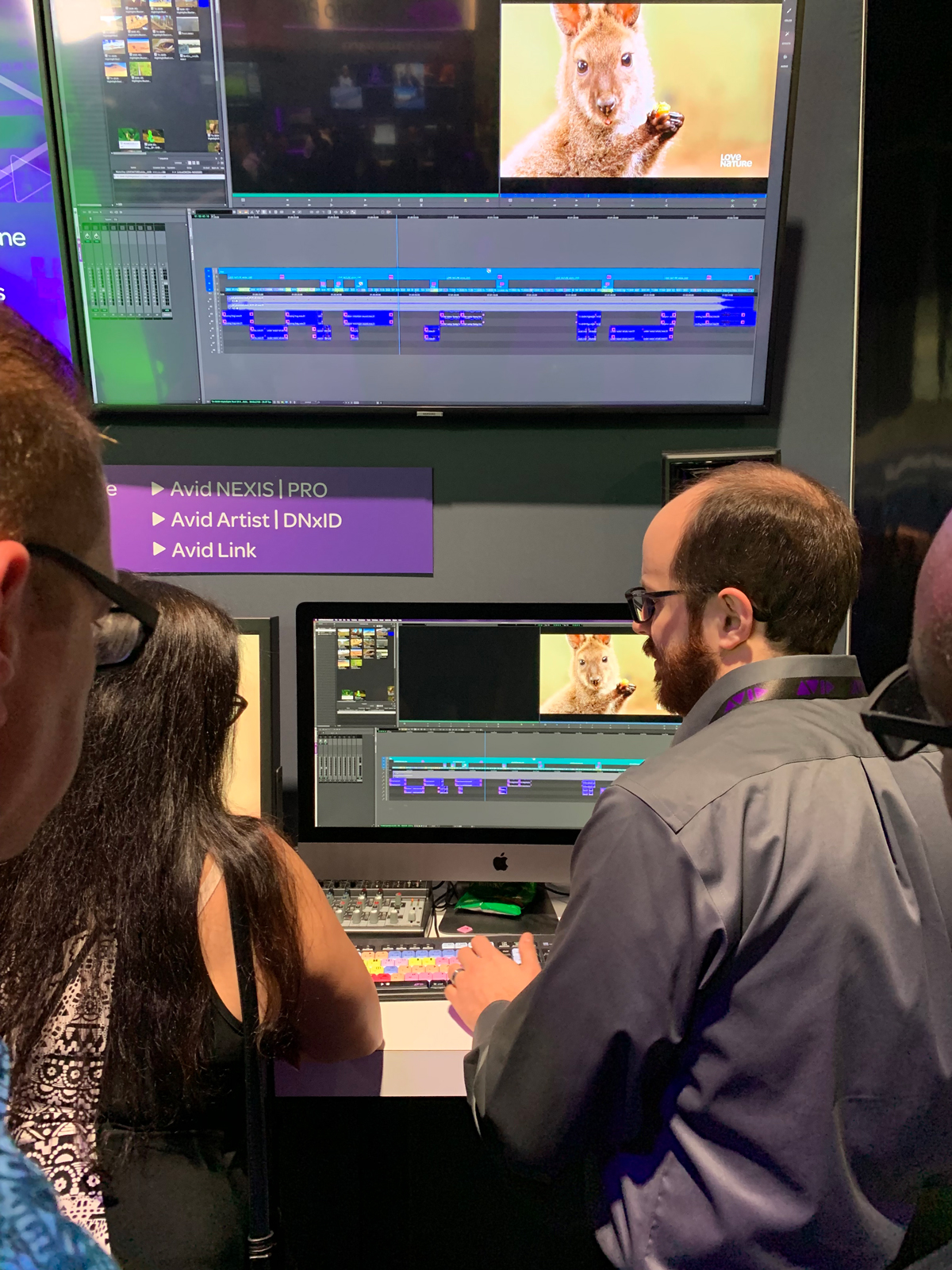 We had to head upstairs in the South hall to see the new GUI from Avid. We were expecting to come away from the stand knowing a little more, but the way the guy was moving the panels around made it all look more confusing. It looks very flexible now, very flexible, however those brightly coloured clips are not going to help in your eyeline when it comes to colour correction.

The final note from the show is that there were a lot of LED panel manufacturers on display. They started to spring up halfway down the South Hall. Some of them looked amazing, including this show stopping 8K screen perched on the edge of a stand. But it's not broadcasting. Maybe this is another indication of the show having to reach out to a broader audience. 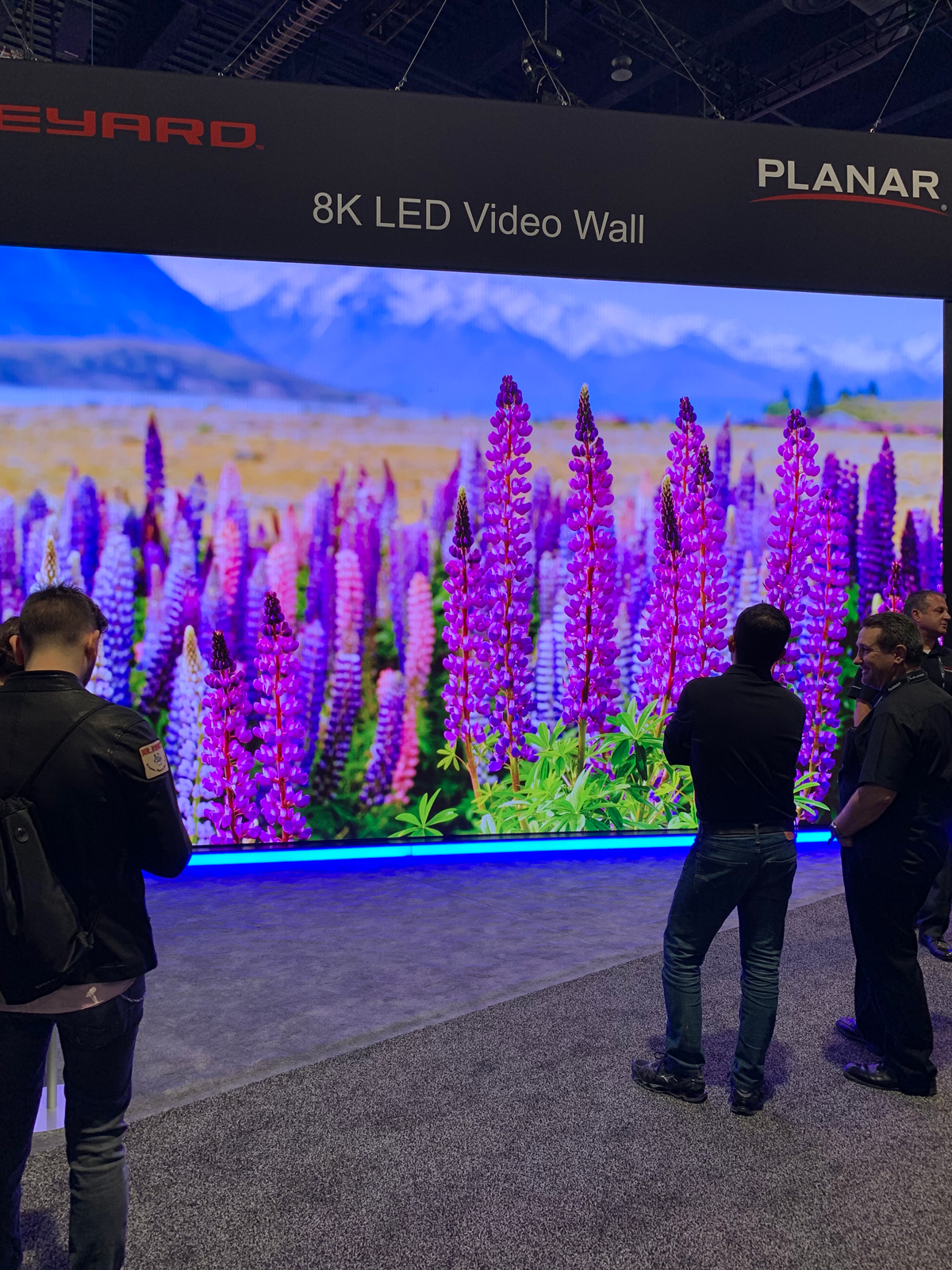 Please visit our part one roundup here, and our report from the 2019 Faster Together stage here.