News from Blackmagic Design And AJA Video at NAB 2015

With all the news about the FCPX update, the NAB 2015 show floor got pushed out of the limelight. We were at both press conferences, so time to catch up.

Let us start in order of press conference.

AJA Video Systems held their press breakfast briefing at the Renaissance Hotel just before the show doors opened. Not a huge amount new unfortunately and certainly not a secret product hiding under wraps to be unveiled. They did announce a lot of 'glue products' such as boxes that can transmit data and pictures down fibres. 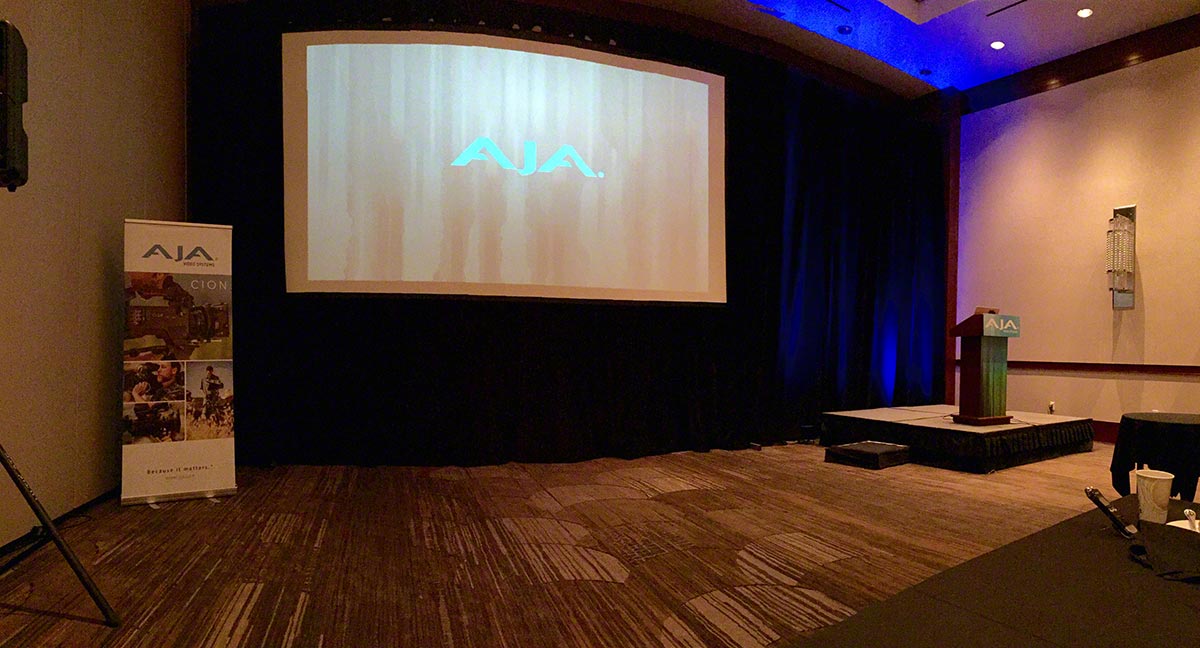 For us in post production, the main news was that they announced the release of v12.2 software for its KONA and Io products.

"'The update includes a new capability for Io 4K that offers AJA Raw ingest to Cinema DNG files from AJA’s CION production camera, at up to 4K 60fps on Mac or Windows. KONA 4 will support AJA Raw capture from CION up to 4K 120fps on Windows. Additionally, 4K Avid DNxHR capture using KONA 4, KONA 3G, and Io 4K has been added to AJA Control Room and Avid Media Composer version 8.4, announced this week by Avid."

“At this year’s NAB we’re opening up several new options for capture,” said Nick Rashby, President, AJA Video Systems. “AJA Raw support is huge for many of our CION customers who already own and use KONA 4 or Io 4K devices in production, providing a cost effective and flexible approach for CION’s Raw workflows either on-set or in the edit suite. The addition of Avid’s great new DNxHR codec offers more options for high quality 4K finishing in an efficient file size.”

Customers who buy AJA's Io 4k will also get a free copy of VirtualForge, a 4K broadcast pattern generator worth $495. Possibly worth looking into if you deal with LUTs and monitors. 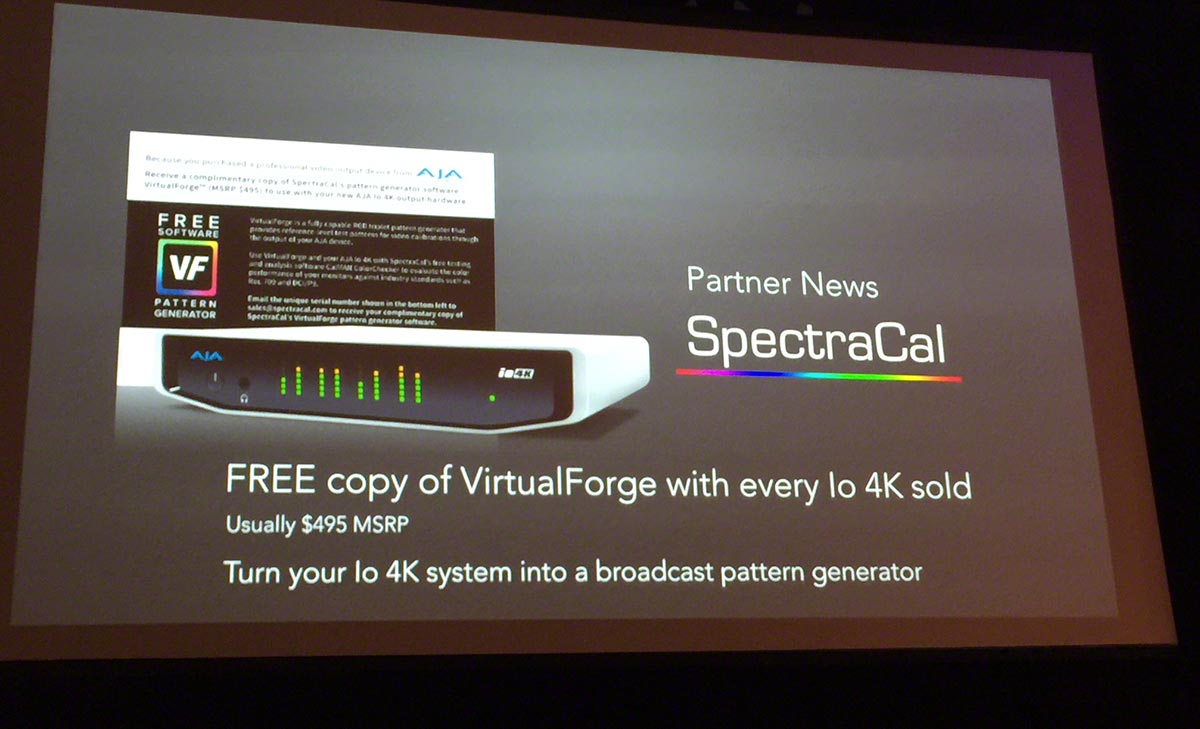 And then it is on to cameras, with support for the CION recording AJA Raw on the standalone Odyssey7Q+ and the launch of #TryCION, a promotion seeding 100 CION cameras into the business.Put your request in early if you want to try one out!

Blackmagic Design was a different story with so many new products they could almost have a hall to themselves. (Thirty eight to be exact!)

For editors the two products with most interest are DaVinci Resolve12 and Fusion 8 Studio.

DaVinci Resolve has added a host of new features which we will shamelessly cut and paste from Grant Petty's press release:

We have worked incredibly hard on the new DaVinci Resolve 12 and we now believe we have the world’s most powerful editor. Combined with the worlds most powerful color correction toolset, it really is an exciting update. And its free!

DaVinci Resolve 12 features a new, modern interface with a lighter overall color scheme and has been designed to look great on high DPI monitors. New top down navigation speeds up layout selections and also gives users more flexibility to customize their workspace. 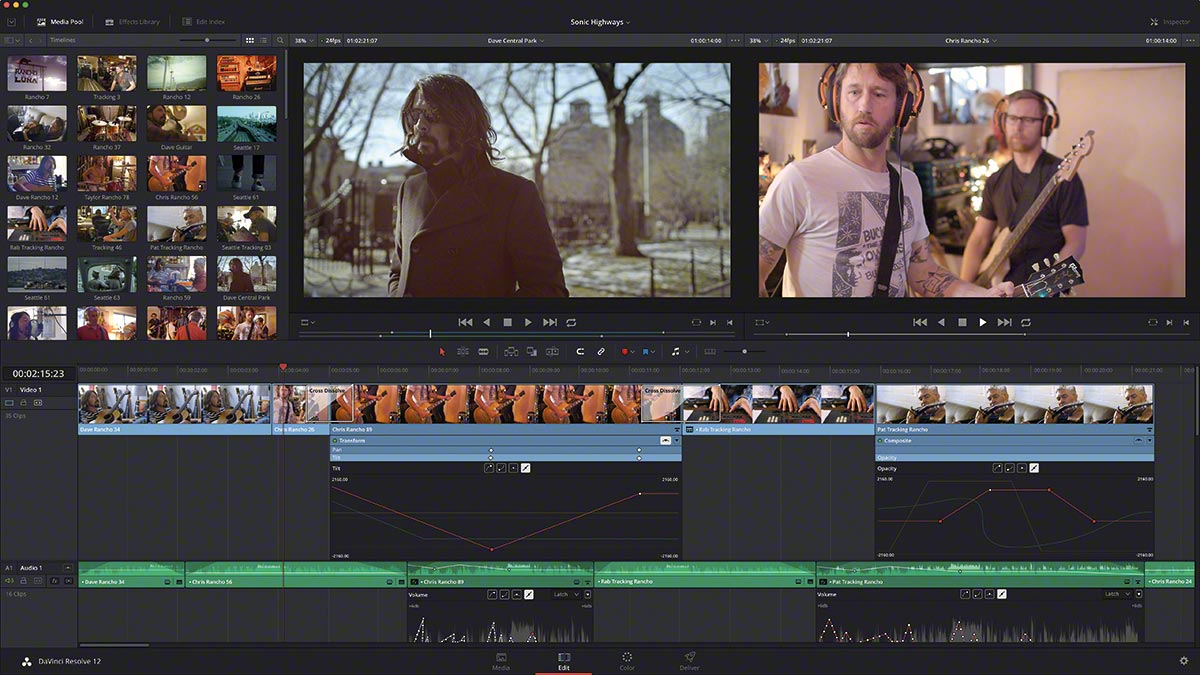 The new GUI in DaVinci Resolve 12

The new multi-camera editing feature of DaVinci Resolve 12 lets editors cut programs from multiple sources in real time. There are a lot of improvements in editing including all trim modes, multi-slip, slide, ripple and roll have been extended and editors can now select multiple points for dynamic trimming and asymmetric trimming of clips, even if they’re on the same track.

DaVinci Resolve 12 includes an entirely new, high performance audio engine that offers higher sampling rates and greatly improved realtime audio playback performance, including reverse playback and tape style slow motion scrubbing during dynamic JKL trimming. Both VST and AU audio plug-ins, along with their custom interfaces, are now supported and can be used on individual clips or entire tracks. Audio parameter adjustments can be recorded and now contain editable automation and full curve editor support. For the first time, editors will be able to export projects directly to ProTools via AAF for audio finishing.

Media Management in DaVinci Resolve 12 has been redesigned to accommodate editorial workflows. Customers can now manage projects and media using new copy, move, transcode, relink and consolidate tools. Whole projects, including media can be archived and restored with ease. Resolve 12 makes it easier to find media in large projects by letting users create smart bins that can display footage based on metadata tags. Users can now import media by simply dragging it in from the Finder or Windows Explorer.

Resolve 12 improves upon DaVinci’s advanced color science by adding support for DaVinci’s own color managed timelines as well as ACES 1.0 transforms. There is an easier to use curves interface, automatic color analysis and matching between two or more clips, an incredibly accurate 3D perspective tracker, and a new 3D keyer with improved matte finesse options. Colorists can now define their own smart filters, convert any window to a bezier, collapse multiple nodes into compound nodes to simplify their view, ripple grades across multiple clips, and flatten pre and post-group grades into a clip’s individual grade.

DaVinci Resolve 12 also now supports remote rendering so customers working in larger facilities can distribute rendering jobs to other Resolve systems that are on the same shared database and shared storage.

This is a really huge update and I feel like we have added more into this release than we have in the last 5 years. A team of almost 100 people have been working on this release and we think it’s the most exciting ever! DaVinci Resolve 12 will be a free upgrade for existing DaVinci Resolve customers.

Phew! just a few updates then and looking more & more like FCPX every version.

With the continued development of Resolve and the very competitive price point of being free for the Lite version, we can see the app becoming used by more people and starting to threaten the customer bases of the big three As. It will be interesting to hear reports if Blackmagic have managed to reduce the clunkiness and how the improved audio works. 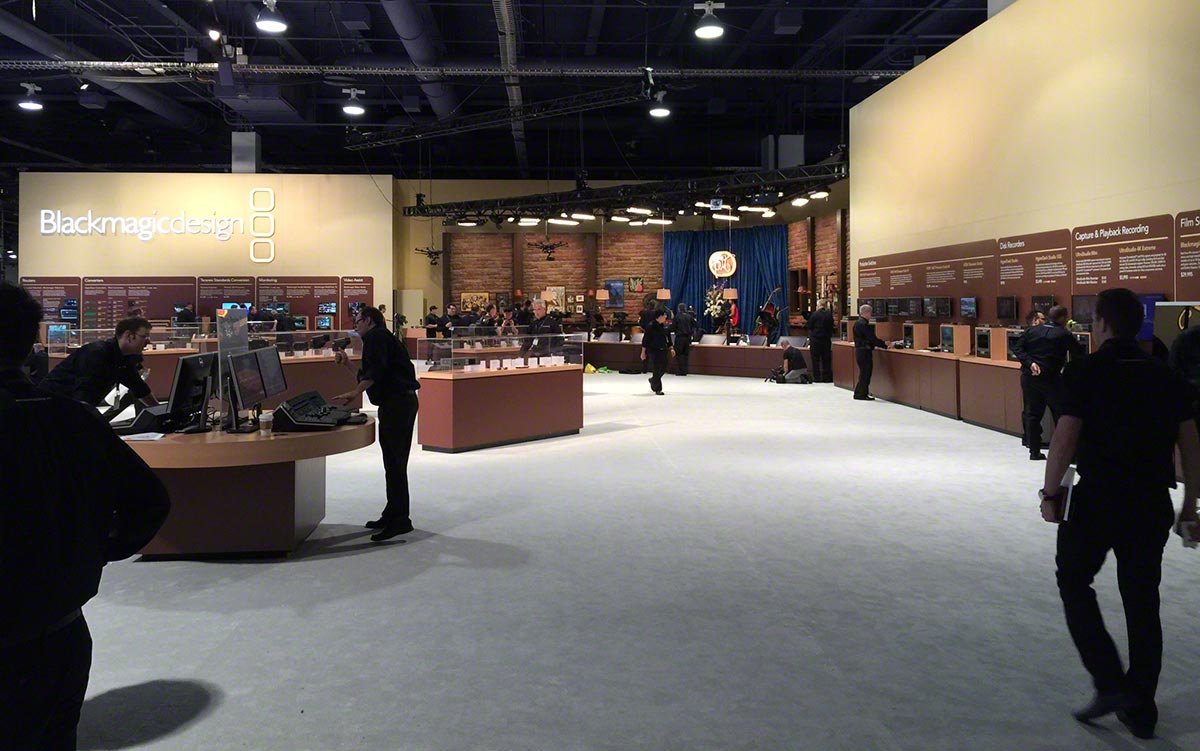 You cannot buy Fusion for the Mac at the moment, but it is being demoed on the show floor.

Fusion has been Hollywood’s leading visual effects and motion graphics tool for over 25 years, and has been used on thousands of feature film and television projects, including blockbusters like Maleficent, Edge of Tomorrow, Sin City: A Dame to Kill For, The Amazing Spider-Man 2 and The Hunger Games, as well as hit television shows like Battlestar Galactica, Orphan Black and many more.

So this will be an exciting update and I hope it will allow more people to add sophisticated visual effects to their work. The node based user interface is such an easy and incredibly fast way to work when you have multiple clips, effects and layers on an effects. Fusion 8 and Fusion 8 Studio will be available sometime in Q3 this year. We also hope to release a public beta before Q3.

Expect a flurry of information about Fusion in the run-up to IBC later this year.

The front of the UltraStudio 4K Extreme

UltraStudio 4K Extreme is designed to work with the highest quality and highest frame rate video, all the way up to 3D stereoscopic 4K at 2160p60. You can use it via Thunderbolt, or if you are operating in RGB at high resolutions and frame rates, the PCIe connection via an optional PCIe cable can be used for faster data transfers.

However this is where the hardware codec encoder is a great solution, because on Mac OS X it can encode the data inside the UltraStudio to ProRes before transfer over Thunderbolt so you can use laptops for working in high end Ultra HD and 4K high frame rate formats!

This realtime hardware codec encoder can also encode to H.265 compressed streams. This means you can real time encode into the file format thats becoming the standard for Ultra HD content distribution via the Internet. This is exciting as you have a complete solution for editing and color correction as well as encoding for distribution.

The rear of the UltraStudio 4K Extreme

UltraStudio 4K Extreme is a rack mount design, however if you want to use it on your desktop, the rack mount ears can be removed so it looks nicer on a desk. It also includes a full copy of DaVinci Resolve 12 so you get a complete editing and color correction solution!

Does this ring any bells? Did not the first AJA Io do a ProRes conversion in the box and then send the signal down firewire? 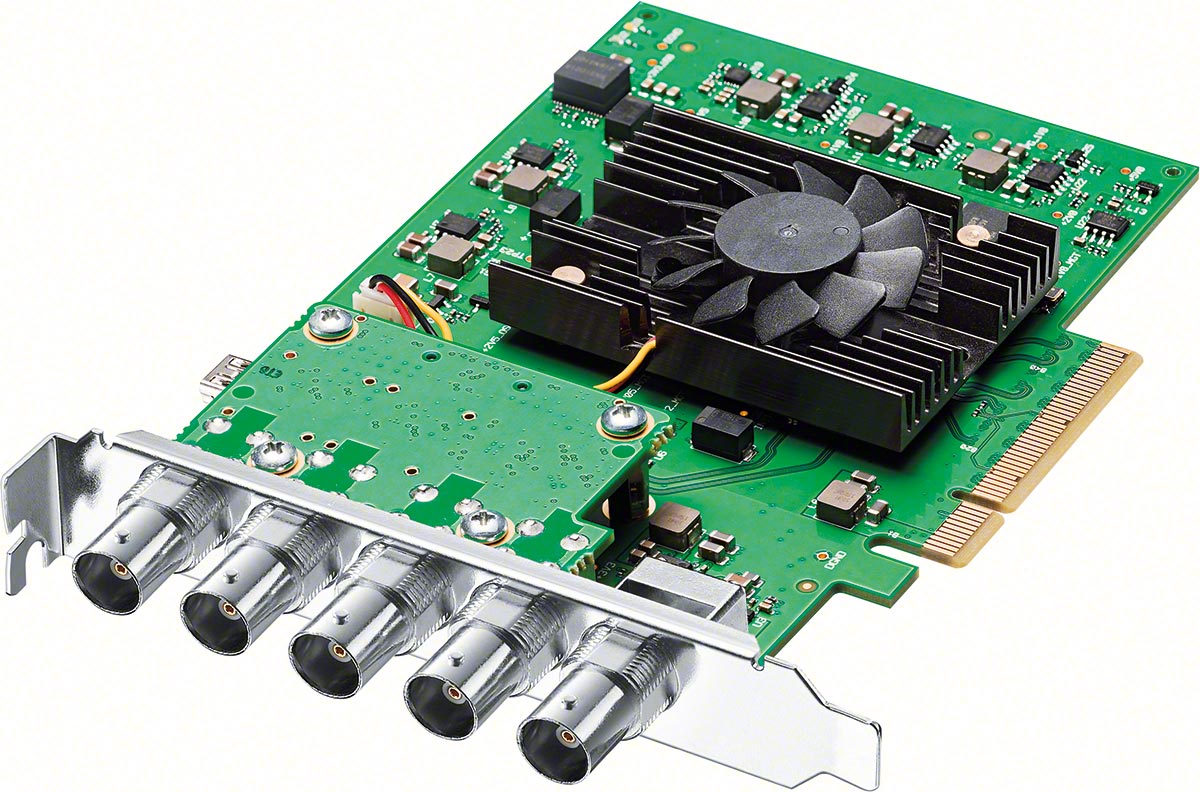 DeckLink 4K Pro is a new lower cost 12G-SDI solution for capture and playback. DeckLink 4K Pro is a great solution for monitoring on DaVinci Resolve as well as for OEM’s and developers. This new model features dual link 12G-SDI in and out so it supports real time capture and playback of fill and key channels even when operating up to 2160p60 so its an extremely powerful card!

It includes video reference input and supports Mac, Windows and Linux and it also supports the Blackmagic Design DeckLink SDK.

So to the cameras, this is where most of the interest was from the show. 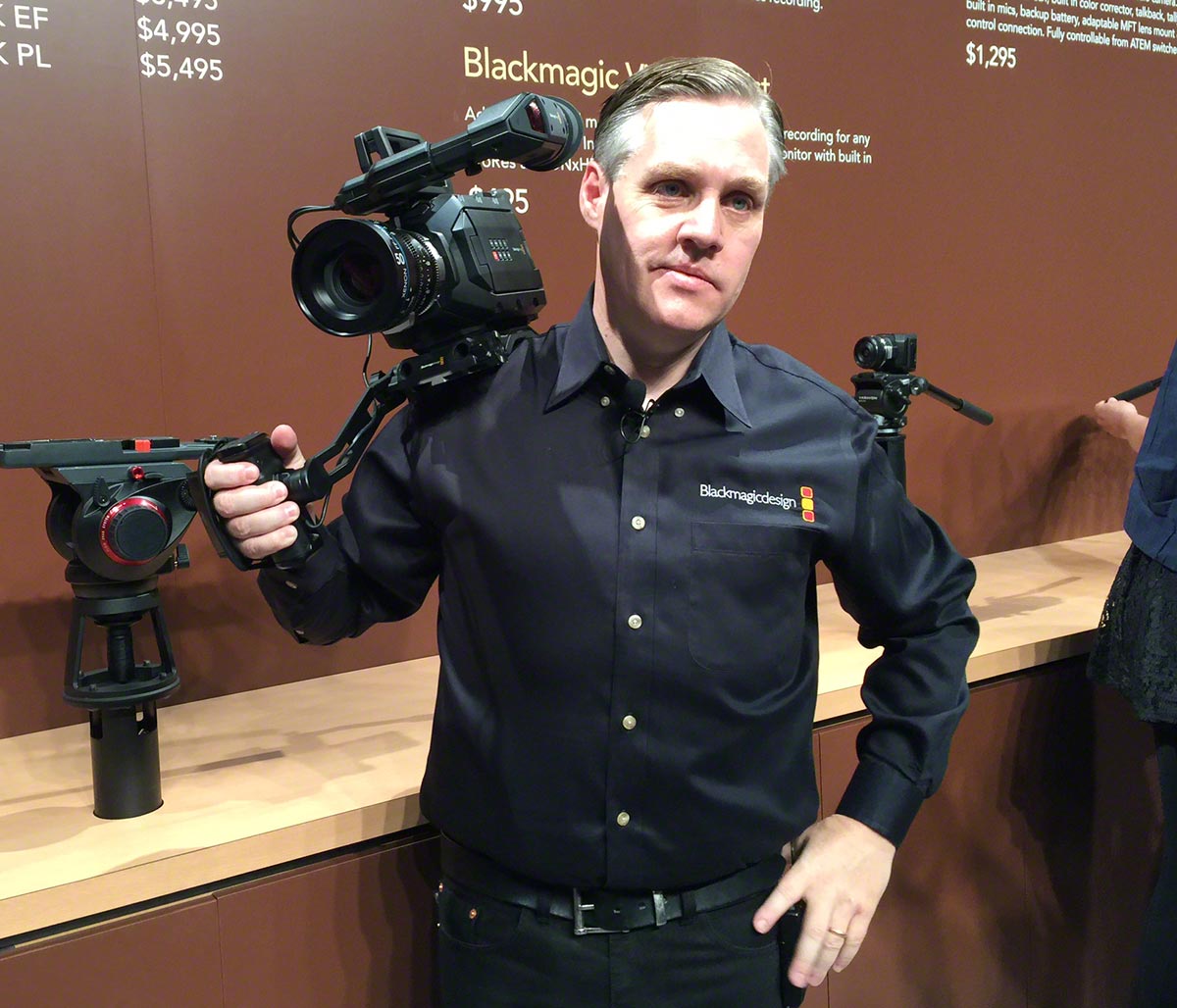 Four new cameras, the Ursa 4.6K, the Ursa Mini, the Micro Cinema Camera and the Micro Studio Camera 4K. They have been covered many times already by other websites, so we will end with a giant clickable link list of the new products.