So you are editing on an ageing Mac Pro and you want to speed up your Final Cut Pro X & Motion renders. That's exactly what FCP.co reader Andrew Smith did by installing a new NVIDIA GeForce GTX 680.

As we all know, a new Mac Pro is due to be released this Fall, or for those of us on the east side of the pond, that means after September the 22nd. But what if we want faster renders now or cannot afford the price of the new machine when it is released? Both apps rely heavily on the Graphics Processing Unit, so is it possible to upgrade just that?

It certainly is, Andrew Smith from Sugarway took on the task of installing a new beefy GPU in a 2009 Mac Pro. He also saved over $200 by using the PC model!

This post is going to be a little nerdy but, I hope, useful.

IN the office one of the machines is an early 2009-Intel Xeon X5550 (4,1) maxed out with 32GB RAM an SSD boot drive and 8 CPU cores hooked up to a 30″ Cinema display. Day to day Creative Suite work and renders in FCPX, Motion and AE run really quick, however the original 512MB ATI Radeon HD 4870 was starting to show it’s age with some plugins and effects, most notably anything 3D or lighting/lens flare effects.

So new machines were considered, but a little research pointed me in the direction of a simple GPU update. Mac editions of the Nvidia GTX680 and the AMD Sapphire HD 7950 were available and had good reviews on BareFeats for the Apps we use.

After some more research, a GTX680 was decided on as it is the same card as the new (well reviewed for FCPX) iMacs, plus the CUDA cores work with Adobe apps. However the MacEdition was £140 more than the PC one! The Yorkshire in me kicked in, and after a little Google action, it seemed that the EVGA standard cards can be flashed into Mac versions, the firmware being the only difference. So onto Amazon and a PC EVGA GTX680 2GB was ordered.

Installing the PC card using the two power cables that were already fitted for the Radeon GPU, was easy. Turned on the Mac Pro – black screen but noises of booting? After a few moment the OSX login screen popped up. It turns out that this is normal behavious for PC video cards, you get no video (no grey Apple logo) during booting until OSX loads the video drivers. Not usually a problem but, if you want to hold down the ALT key during startup to change boot disks, have a password protected EFI or want to run a disk repair, you are stuck.

I also noticed in System Profiler that looking at the PCI bus info showed errors and no info, it could see the GTX card in Graphics/Display, but something was not quite right. I decided to flash the PC card into the MacEdition version.

The Flashing Process
You need to have bootcamp enabled and running on your Mac Pro as all the firmware flashing tools are PC only.

I was already running a windows 7 32bit bootcamp partition so this was no problem.

• The NVIDIA GPU flash utility required is, NVFLASH for Windows

• The Mac GTX firmware is available here. (Right click and ‘Download linked File as’ – This version is already unzipped and ready for flashing – Instructions below are for use with .BIN files you may have downloaded from elsewhere).

*You need to Unzip the BIN then change the .BIN files suffix to .ROM – Unzipped file size should be 218,112 bytes, DO NOT decompress the .BIN file once unzipped, if you unzip the .BIN again and load this rom onto your card it will brick your GTX – black screen, no booting, dead machine (I did this and had more work to do to restore back to working order**)!

Download both of these files whilst booted into windows, place the unzipped and renamed gtx680mac.rom file in the same folder as the NVFLASH application. 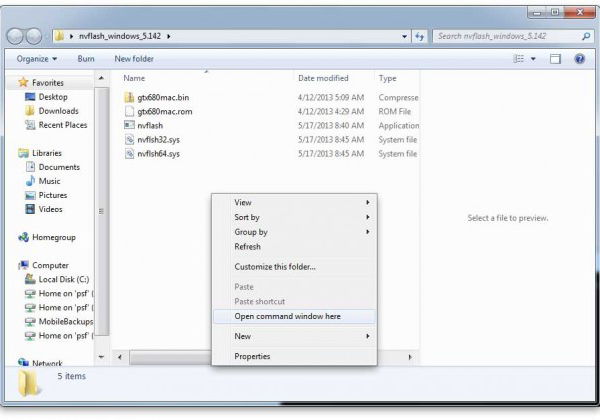 Launch the NVFlash app by opening the folder it is in, then holding shift, right clicking in the window and choosing ‘Open Command Window here‘ from the popup menu. In the command line that appears type the following;

“nvflash -b mygpubackup.rom” (NOTE: mygpubackup.rom can be any name you want followed by .rom - This backs up your original firmware to disk, just in case you need to restore a corrupt card like me!)

Now is the scary bit, updating the card with Mac firmware. Type the following command into the command line window; 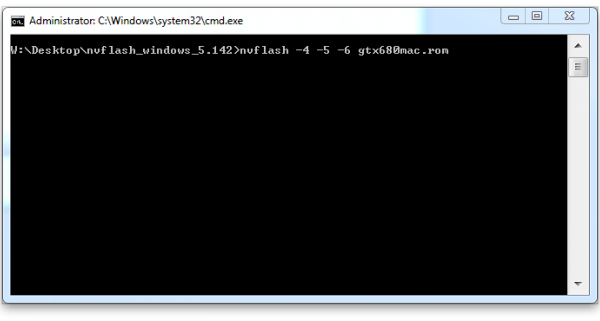 You will usually have to confirm a couple of items with a ‘Y’ or ‘Yes’ don’t worry this is normal!

Worked for me and, other than the silly mistake with corrupt firmware upload, took about 20 minutes. REMEMBER you follow my instructions at your OWN RISK, if it goes wrong it’s down to you!

**NOTE: To recover the ‘dead’ GTX card after I uploaded the corrupted firmware I had to move the GTX card into another PCI slot and reinstall the original RADEON into the main bottom slot to get any video display back. I plugged the two power cables into the RADEON card, the GTX680 DID NOT have the extra power cords running to it so I was worried it would not be visible. Luckily for me the GTX card was active and could be seen even without the two additional power feeds. I was able to flash it back to its original PC firmware and start all over again! Flashing worked the second time around no problem – DO NOT unzip the bin file TWICE like me! Unzip once then rename with .ROM 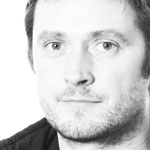 Andrew Smith is partner in charge of technology at Sugarway - a UK based Digital Design company that specialises in Motion Graphics.

A nerd since getting his first ZX Spectrum, Andrew loves fiddling around to see how technology works. After getting the film bug at Leeds College Art, where he made several films with Leigh Francis (Keith Lemmon!), Andrew ended up running a company that refurbished and designed shopping trolleys. You know those white trolley shelters in every Asda carpark? Andrew designed and built those!