Let Your Fingers Do the Wandering - Using the Trackpad with FCPX 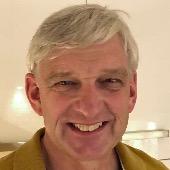 When we saw John Matthews' comments on social media about using an Apple Trackpad and Final Cut Pro X, we had to know more. He's very kindly put together his findings on the Trackpad in words and a couple of great video demos.

This originally came out of necessity for a change. I am right handed and was suffering from RSI in my mouse hand, sore wrist, cramps, tendonitis at the elbow and soreness in my index- “clicking” finger. I’d heard some mixed reviews about the Trackpad.

I’d never really got on with it on My MacBook Pro, but decided to buy one for desktop use, on the basis, that even if didn’t measure up, it would give some respite from the mouse. They are not cheap at £149 in the UK. 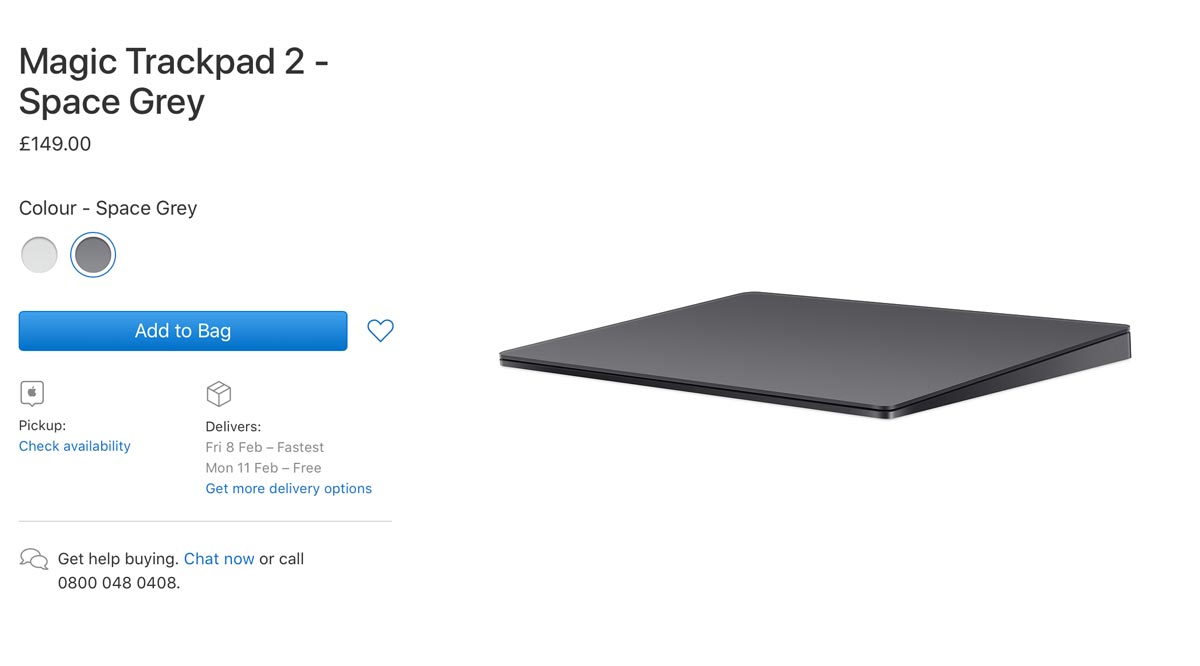 The Trackpad 2 is very compact, at around 16 x 12 cm. It’s a dragging device like a mouse, but uses inertia, to go a further distance in a shorter time, the faster you drag, the further it goes. You can cover great distance, just by moving more quickly. A modern mouse, like the Apple Magic Mouse, also does this, but it is much more effective on the Trackpad.

One of the reasons my index finger is always sore, is the continual clicking about. Inside the Preferences for the Trackpad, there is an option called “Tap to Click” I turned that on and immediately saw an improvement, no more clicking! 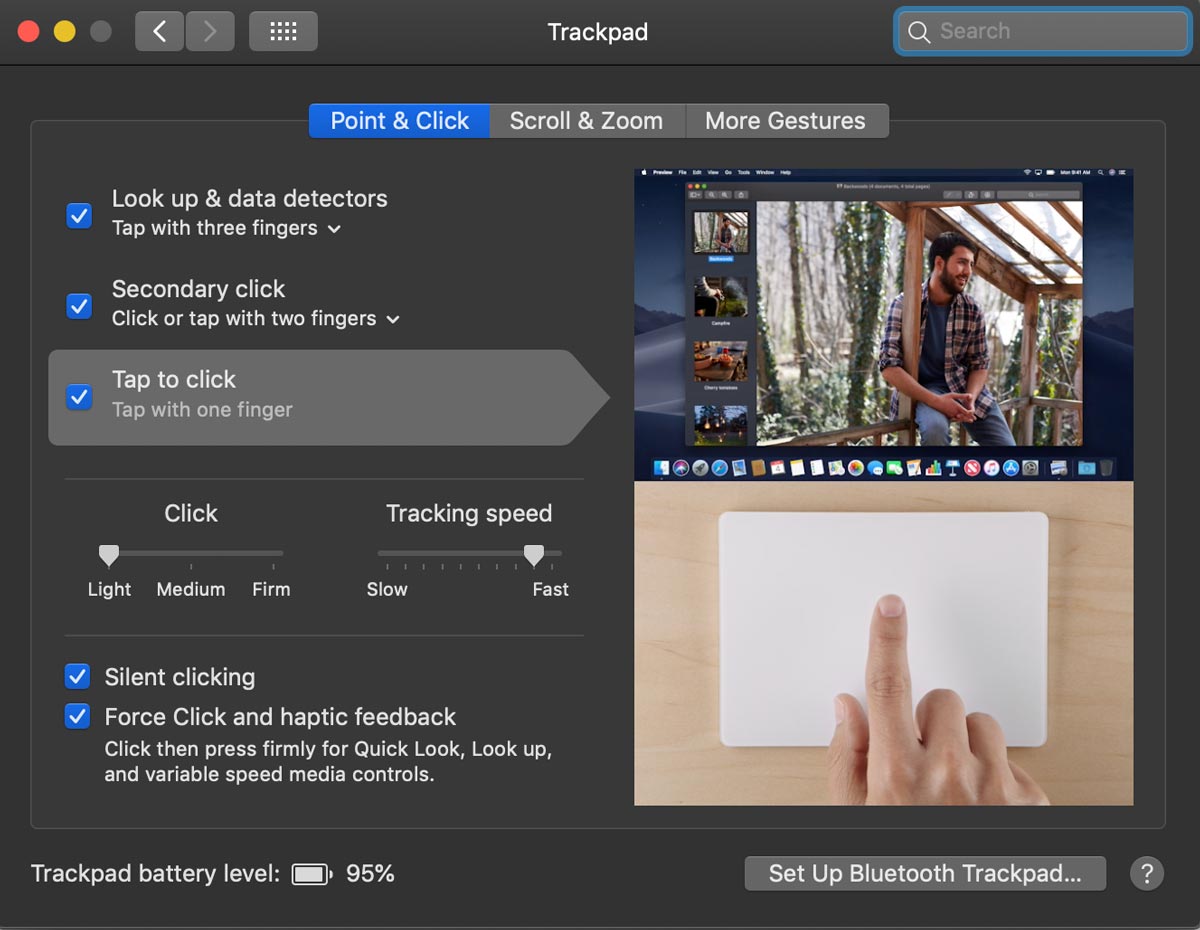 When it comes to selecting, you simply drop down a second finger. This is useful because the other finger can continue to do the moving. I was still having problems with control and accuracy, I found that it was easier to control when it is a close as possible to you, not at arms length, out to the side. 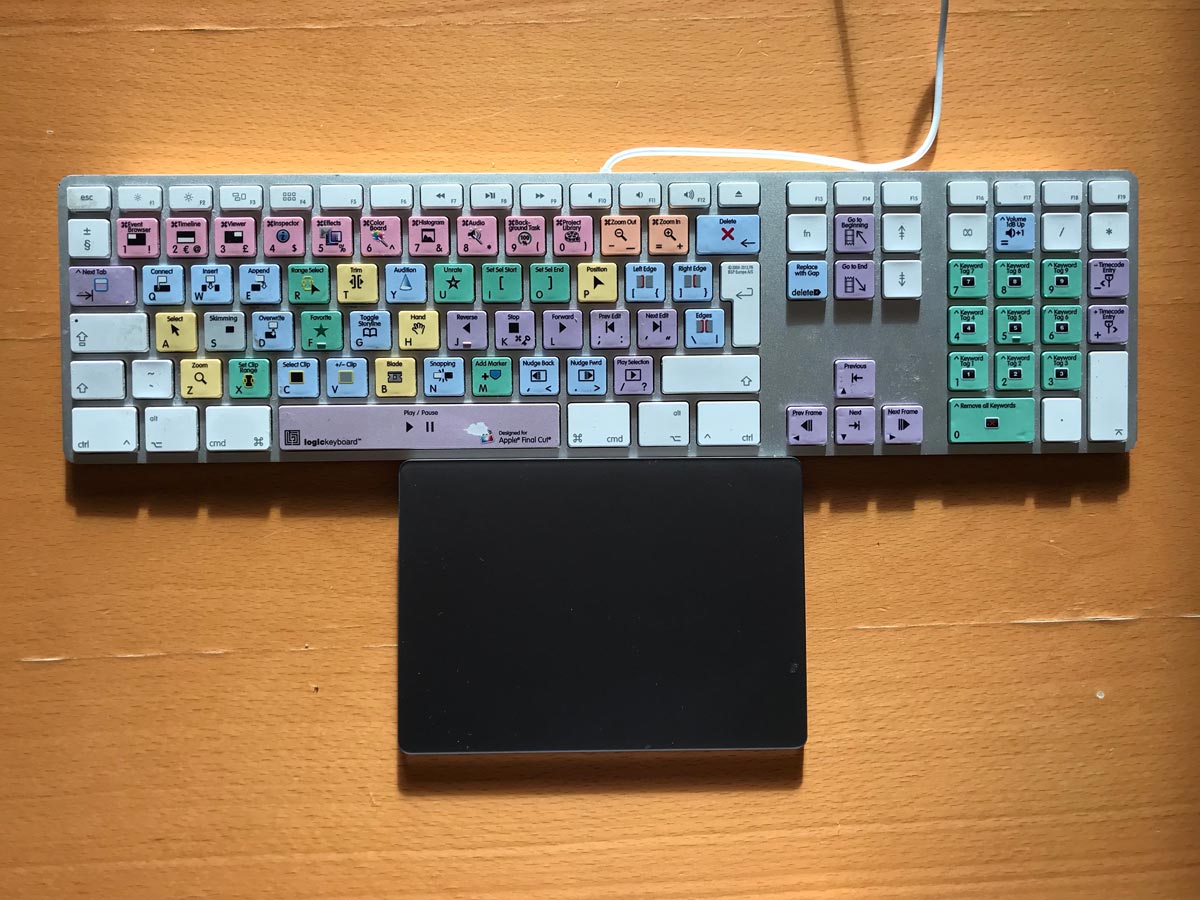 To solve this, some like to have the Trackpad in front of them, as it is on a MacBook. I tried this, directly behind the keyboard, but it proved problematic, in combination with having the “Tap to Select” preference, since even a “butterfly’s kiss” on the pad, from your palm, whilst typing, sends the cursor off to oblivion!

The 2016 MacBooks, with the enlarged Trackpad surface, suffer from this reaching over problem too. I came to the conclusion that you can’t use “Tap to Click” and have the Keyboard behind. 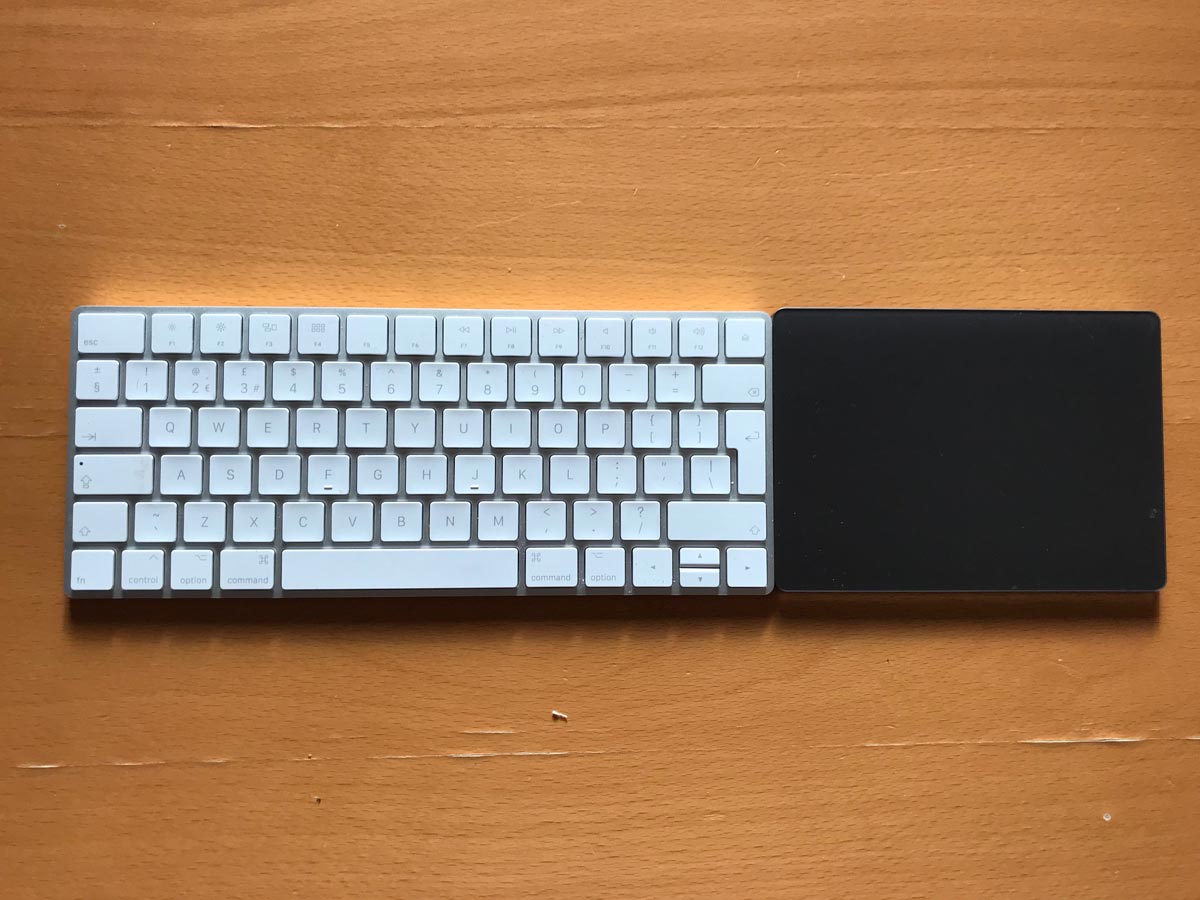 The solution was to dispense with the dedicated extended keyboard, I had grown used to and re-instate the stock Bluetooth one, that came with the iMac. Using this meant I could put the Trackpad alongside, replacing the space previously occupied by the extended keyboard. This works so well and is the best compromise all round. Would I miss the extra keyboard functionality?

I’m looking to use the Trackpad for all Mac operations, but Apple offer some options for the Trackpad, uniquely for FCPX. You can find them here.

I find them all very intuitive to use. Zooming in and out by pinching, takes a bit of taming and is affected by the complexity of the Timeline and whether you have waveforms and Thumbnails enabled, since it is doing a smooth resize, rather than the re-draw increments of the keyboard commands. All the same, it’s more a case of developing a feel for this, and is actually OK most of the time.

The other commands for, horizontal and vertical scrolling, navigating cut points and going to the beginning and end of your Sequence, are great, and your muscle memory adapts in no time.

There is another command called “3 Finger Drag”. 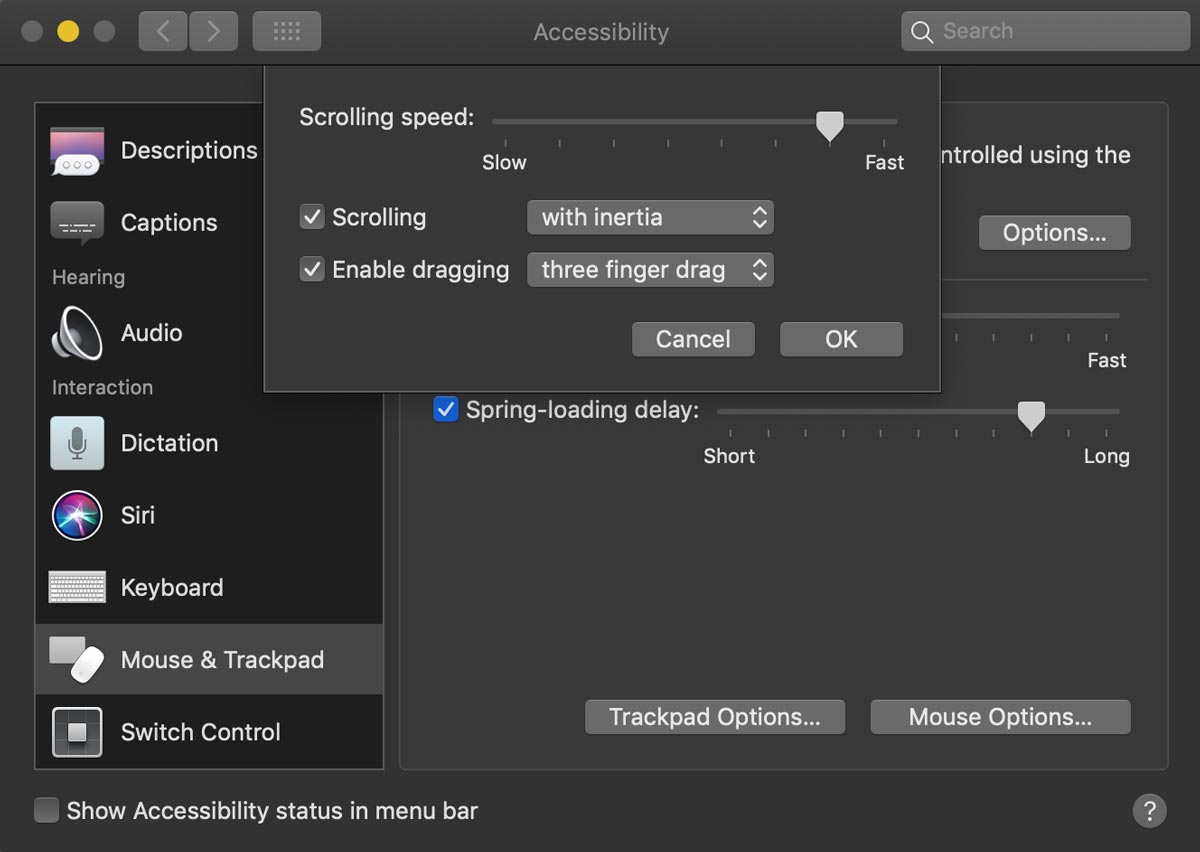 I love this because you don’t have to select anything, just drag an object, or a Marquee, there is nothing to hold down and it’s great for Trimming.

To get to this option you have to delve into the Trackpad Accessibility and turn it on there. Unfortunately if you have this on, you lose the 3 finger swiping navigation controls above. I haven’t found a way yet of having both these features together.

For those who love the Logictech MX Master, these gestures alone aren’t going to be enough to make you switch to the Trackpad. The MX has buttons and wheels, to add functionality, these are useful and easily programmable with the dedicated App. I personally find it heavy to use and the scrolling jerky, for webpages etc. Logictech maybe don’t have access to the Apple secret sauce that makes the Magic Mouse so good.

Would it be possible though to add the same extra features to the Trackpad? Yes and some! It requires an Application called “Better Touch Tool” download the 45 day trial here. This opens up a whole world of extra functionality. 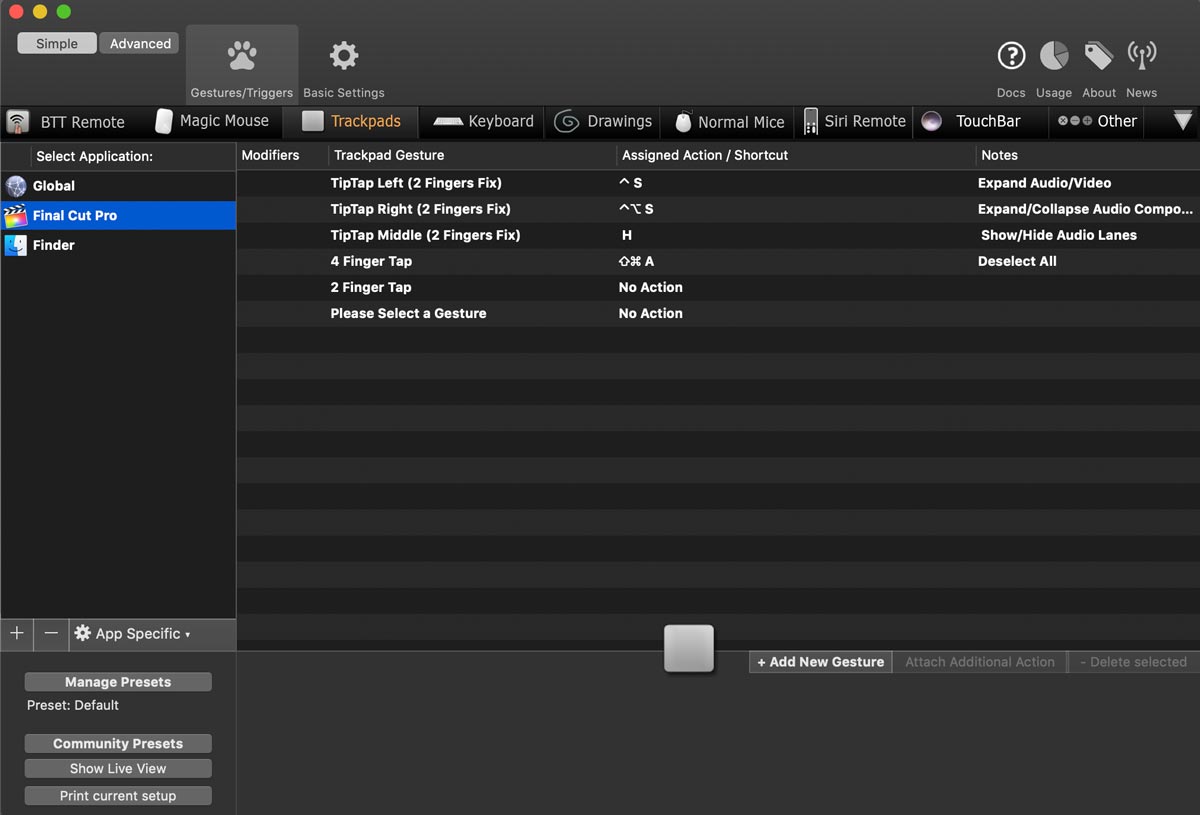 To do this is self explanatory, Add FCPX on the left, as an “App Specific” Application, select the Trackpad options and “Add a gesture” from the enormous list, then combine with the FCPX shortcut of choice. The Tip Tap commands are excellent. The tool is live so you can road test straight away.

I demonstrate my choices in Part 1 of the demo, but there is no limit to what you can add in. Once I get enough flying hours, I will gradually add more. The challenge is mastering the light touch, those of you already using the Trackpad for other applications, will be half way there.

If you never use it, I won’t pretend that learning the Trackpad is easy though, the first time is akin to attempting clutch control when you first get behind the wheel of a stick shift car, it takes a bit of perseverance to get the feel. FCPX though, seems to be all about dragging, even though it’s still crucial to learn and use as many Keyboard shortcuts as you can.

Part 2 of the movie deals with specifically selecting and dragging objects in FCPX.

It’s early days for me, but I’m convinced that Apple had the Trackpad in mind when designing FCPX, hopefully my demos confirm this. Even without Better Touch Tool, there are some great features and gestures for FCPX, that Apple have already included as standard.

I am a creative freelance craft editor, with broad spectrum experience across, long or short-form, special events, magazine inserts, Childrens’ documentaries, promotions, drama and music. Classically trained, I am an industry expert and post production specialist with over 40 years broadcast experience. Story is everything and I’m happy to collaborate, on any genre, to create the narrative, or work from a script, alone, or with a producer.

I regularly offline, online, grade and sound mix the material I edit. I am proficient with all the latest HD delivery specs. and file-based working. I have my own equipment for location and home working on Avid, FCP X, Da Vinci Resolve Studio, with full broadcast HD spec. I have a musical background and play piano. I have a particular interest in Final Cut X. It has a forward thinking approach to storytelling.
Please contact me for references.