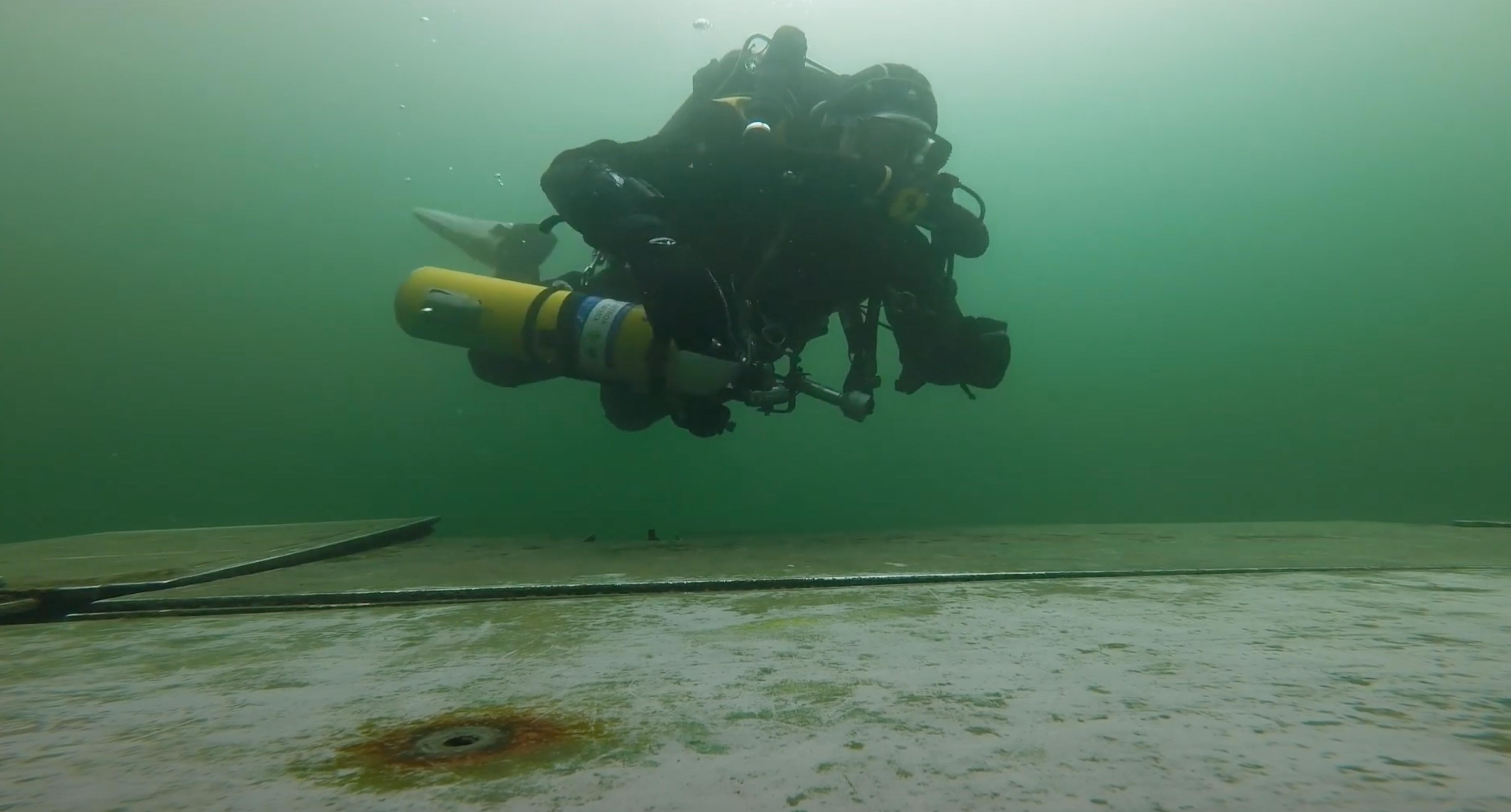 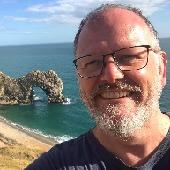 Rookie ALERT! Having been blessed with the good fortune to be lent a MacBook Pro M1 laptop running Final Cut Pro, I was very excited to try it out.

I will add that I am a PC user with an ageing i7 Acer Aspire laptop running Windows 10. (Silence at the back!) I am a scuba diver (Hypoxic trimix rebreather diver with an 80m/260ft maximum depth if you are interested!) and avid underwater video maker. For a test, I decided to have a play with Final Cut Pro and my GoPro Hero 3 in Stoney Cove UK. (A flooded Quarry where Scuba divers go to practice). I will add the MacBook Pro stayed firmly in the dry!

First impressions were WOW! It is so thin, light and stylish. It is beautifully understated with subtle curves and the aluminium case sets it apart from other plastic laptops. At only 13” it would be perfect for anyone on the move and would fit nicely in a backpack. 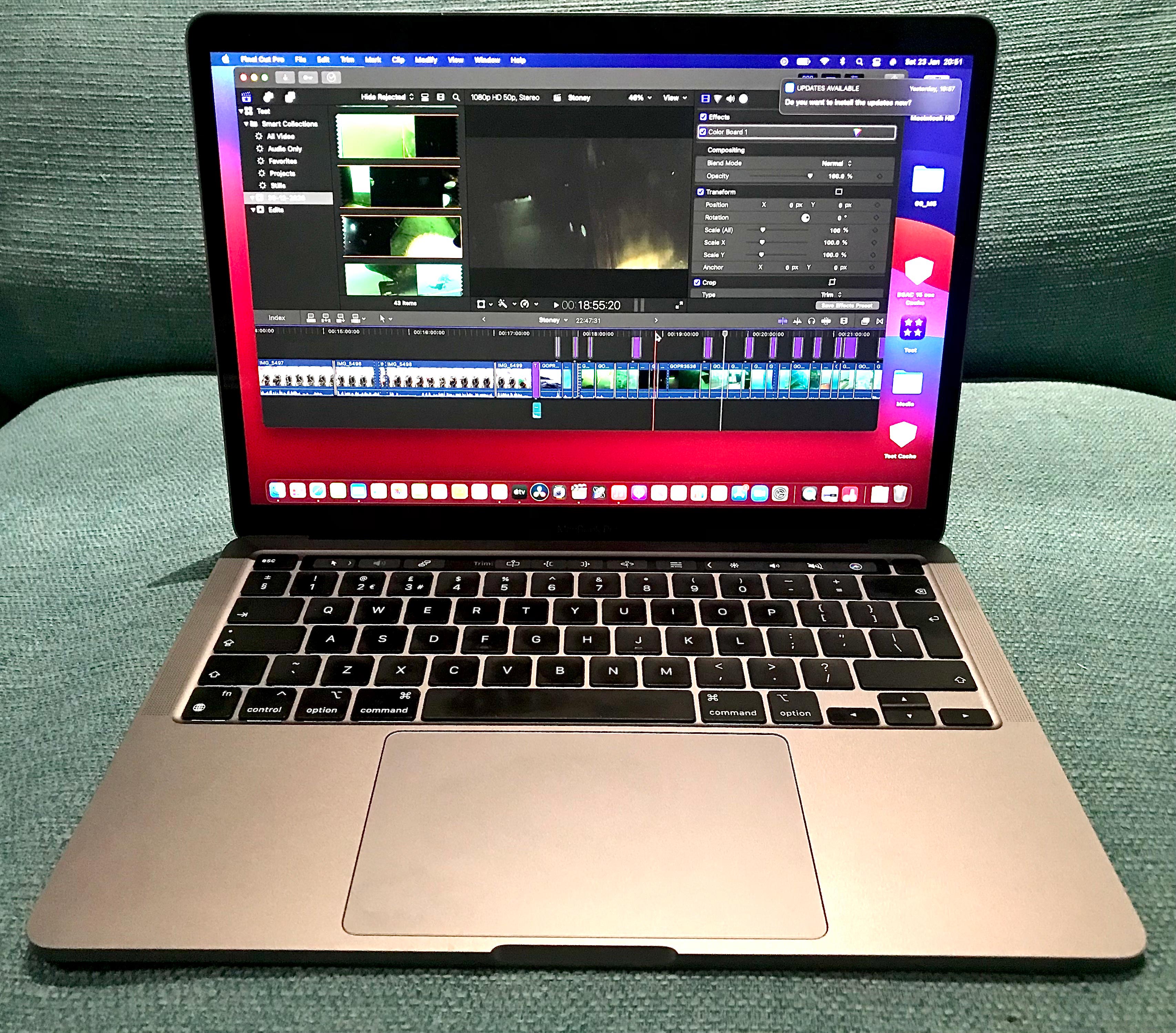 Box open, I carefully removed the ‘wafer' of a laptop and opened the lid. BAM! It booted in a second. Impressed I clicked on the FCP icon. BAM! There it is. You do not get this ‘instant on’ on a PC laptop and that’s not even taking into account the times when Windows wants to do its frequent security updates before you get started.

I had a blind bumble around the software and quite quickly, without instruction, was able to create an opening storyline and import video clips.

I found FCP quite simple to get something together quickly and despite knowing very little about video editing, I was able to get things together on the timeline quite quickly.

As time went on, I started to get used to the keyboard shortcuts and with a bit of Googling about how to add titles, transitions and effects I really started to have fun with it. 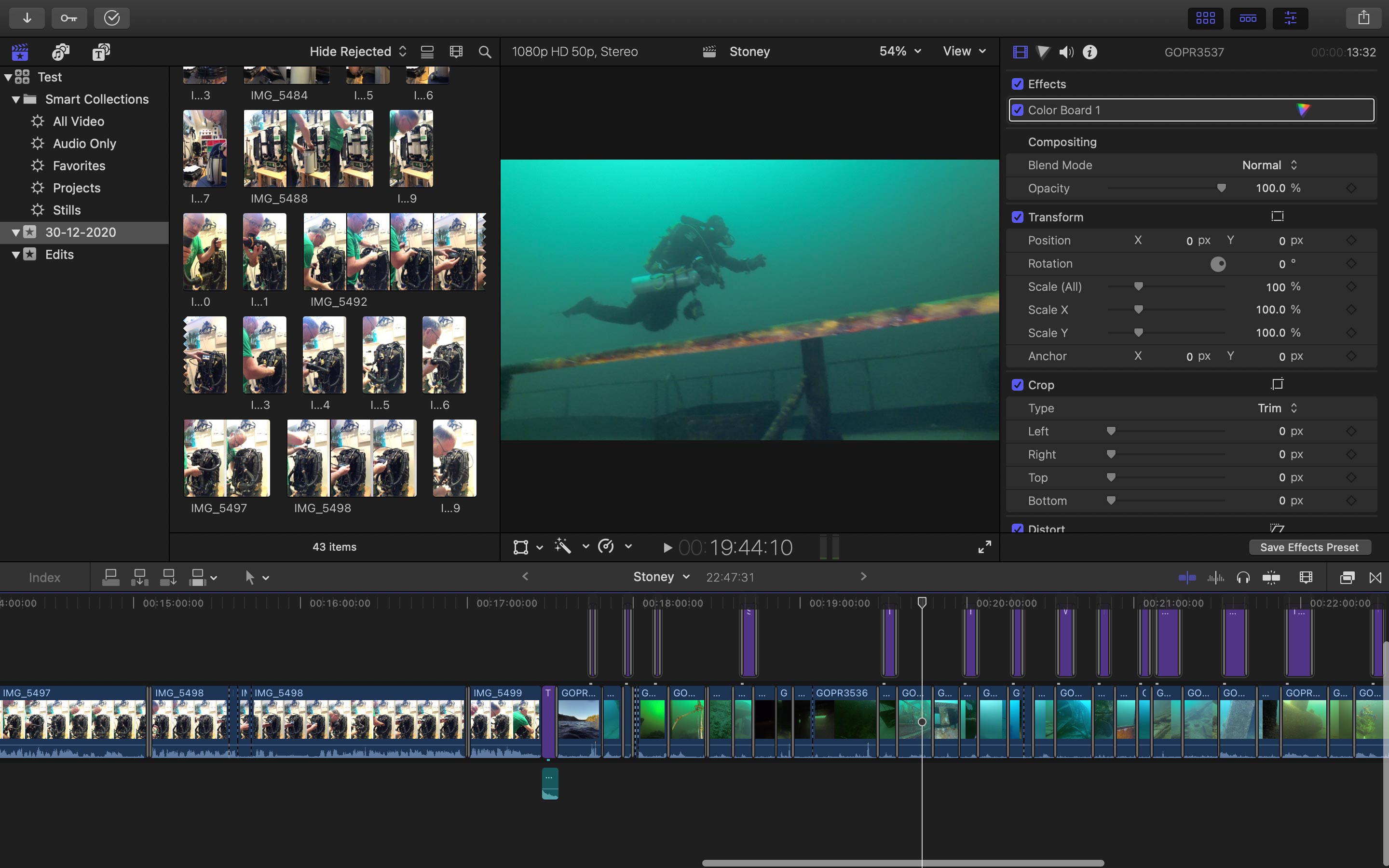 In terms of the MacBook Pro M1, I can only say it was gloriously invisible. I knew it would be faster than my PC, but I was very surprised how quickly I got used to expecting instant actions! Definitely a lot less clicks and a lot less time to do the editing tasks I normally go through.

The functioning of the laptop has been very well thought out. The touchbar at the top of the keyboard is superbly useful and has everything you need, just before you need it. Having the whole FCP ‘mini timeline’ in the bar is a very fast way to navigate up and down the edit. One added benefit is that you can shuttle through the ads in YouTube videos you are watching.

The two thunderbolt connections are incredibly fast. I shot the dry bit of my video on my iPhone and the files were downloaded in seconds (20 mins to do this on my PC). The battery lasted around 8 hours of heavy editing (and Googling) which was extremely impressive. Plugging it into the mains for charging put 80% on the battery in half an hour.

I could see myself taking it on a ‘liveaboard’ to get my daily dive footage off the GoPro and on to the MBP and a backup disk. Then edit and upload the final edit to YouTube all on one charge. 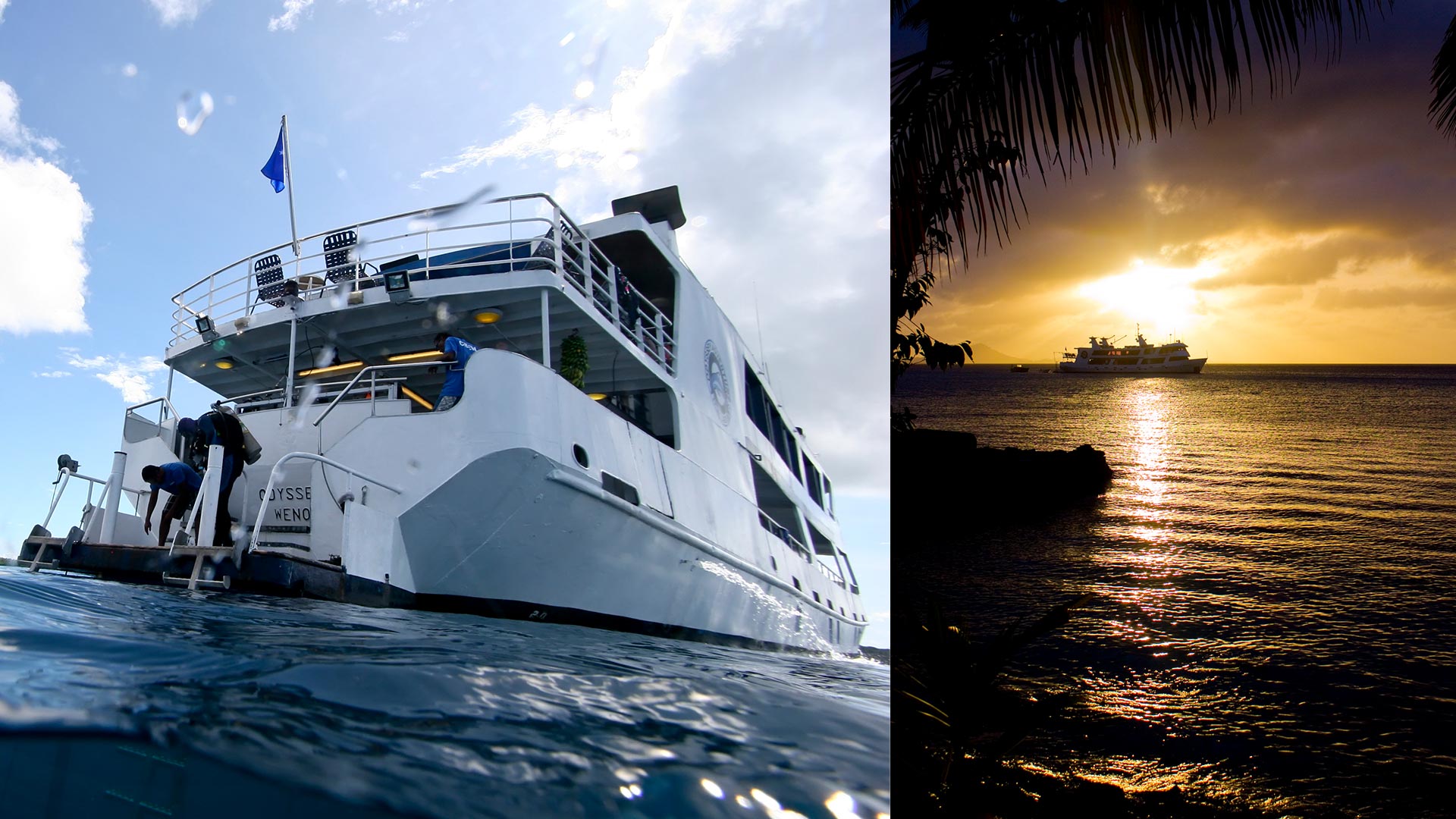 One note here, if you are upgrading from a computer without USB-C/Thunderbolt connections, then you will probably need to invest in a few adaptors for your old USB-A peripherals. Same for connecting to a high-speed home modem via ethernet. Not a deal-breaker and I certainly don’t want another laptop that’s thick enough to get an ethernet socket!

I know that coming to an M1 Mac from a PC, I’ve taken a leap and a leap in the Mac world too. I was aware of the switch to new chips by Apple, but It didn’t really affect me or how I worked the machine. I would imagine a lot of other new M1 customers will be the same, just power it up and get on with whatever they need to do, without knowing any of the new microelectronics inside.

So, in summary: FCP is an incredible piece of software, but it is certainly accessible to the rookie. The MacBook Pro M1 is stunningly smooth and fast, has amazing ergonomics and fabulous battery life. Both are on my Christmas present list.

I am from the middle bit of the UK and work during the day in manufacturing as a senior manager in engineering and project management.

As a very active and keen scuba diver,  I have been putting together videos and taking photographs underwater since 2006. I am motivated by the wonderful way light falls underwater,  especially inside intact shipwrecks.   I have a canon 550d DSLR in an ikelite underwater housing and twin strobes (flashes).  in addition,  I mostly shoot wide angle through a domeport.  For video, I have a Gopro Hero 3 which,   I generally use for underwater video as it is smaller and easier to handle along with all the other heavy kit.   I have somewhat pushed the limits of the gopro as it has a 40m housing but has been to 70m and didn't leak.  I am qualified to 80m.

I set up a youtube channel to record my dives and advertise the sport that I love.   Have a look!

Recently,  I had the amazing opportunity to try out a new M1 macbookpro 13", for which my write up will hopefully appear soon.   Compared to my aging PC it was a bit of a culture shock.  Using FCP for the first time seemed daunting,  but I can honestly say,  it was very intuitive for a rookie!  More in the article....

Discuss this article
Log in to comment
Posts in discussion: Experienced Diver, Rookie Editor with the M1 MacBook Pro and Final Cut Pro

markspencer replied the topic: #112352 27 Jan 2021 04:04
Very cool - just got my PADI certification and my business partner Steve is an avid diver. Hit us up for some training.
Mark

Ben Balser replied the topic: #112355 27 Jan 2021 08:03
If memory serves, the person who originally came up with the concept of FCPX did it while on vacation and logging diving videos (amongst other things) and got frustrated with legacy FCP and other NLEs. Nice article, thanks for publishing it.
Read More...