CalDigit has announced a bus powered Thunderbolt 3 to 10GigE adaptor. A perfect way to connect your Thunderbolt laptop to fast NAS storage.

It seems that 10GigE is winning the race on standardising connections to shared storage units such as a NAS. The benefit of 10GigE over Thunderbolt 3 is that the cables can run longer and more users can be connected concurrently.

The iMac Pro already has a single 10GigE connector, it's option on the Mac Mini and the upcoming new Mac Pro has two (We will have to see if these can be bonded together). But what about connecting a non-10GigE Mac up to the fast network?

There are a few bus powered adaptors on the market already, the Promise SANlink 3 retails for $250 and the Sonnnet Technologies Solo 10G for $180 and the QNAP QNA-T310G1T (NbAse-T) for $190.

So the CalDigit is entering a competitive market already, maybe that's why they have chosen to sell the Connect 10G for $150.

The unit is pretty small, has a Thunderbolt 3 connection on one end and a Nbase-T connector on the other. Nbase-T is a posh way of saying that it will try to connect at 10G speeds first, if unsuccessful it will then drop to 5, then 2.5 then 1GigE. The protocol was designed as a way of getting faster than 1GigE speeds using existing copper Cat5 cabling that might be already installed down the office trunking, in the roof or worse, stuck behind walls. The other three models also support Nbase-T.

Chances are though, you will have a shiny new Cat6a or Cat7 cable direct to your storage unit for solid 10G speed. Apple has produced this white paper on what speeds you will expect with the iMac Pro and Mac Mini with different types of cabling. 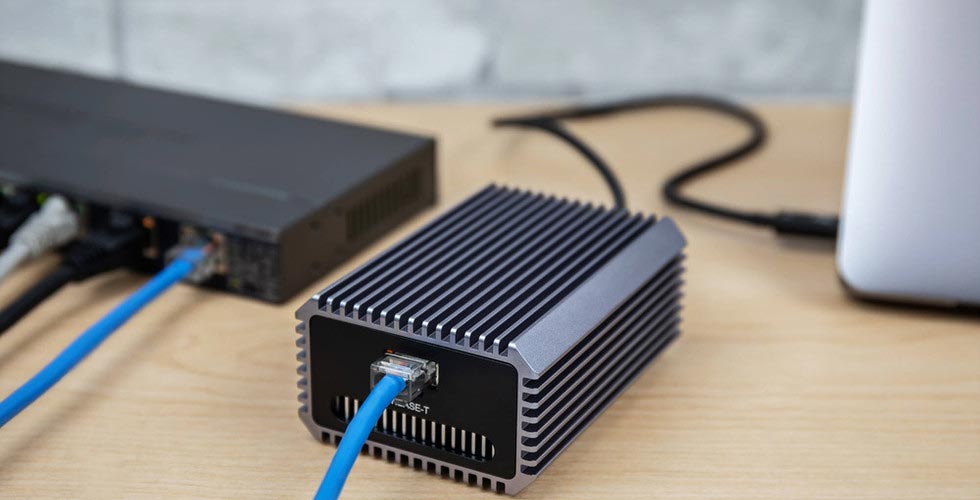 The unit is an end-of-chain device, so it will take up one of the Thunderbolt 3 ports on say a MacBook Pro, but it is bus powered, so no awkward mains lead to fall out and lost connections.

We like the LED on the side of the RJ45 connector that gives an indication of the speed. It's green for 10Gig and yellow for 5Gig and lower. If you are like us, we keep an eagle eye on network speeds as modern day NLEs such as FCPX really do benefit from having a fast connection to shared storage. Think waveform generation.

We welcome this addition to the CalDigit range. One word of warning though, well OK, a sentence. We have had varying levels of speed success with other Thunderbolt to 10G converters, so we recommend trying to test any of these out before you buy them. Also compare the heat they produce and noise if they contain fan.

Also it would be good if CalDigit made an SFP version so that users could be connected by optical fibre.