A user story very close to our heart at FCP.co. Winston Cely describes how his pupils at a school are using Final Cut Pro X to tell their stories. He also tells us how custom music gives them more freedom and choice for their productions.

The basics are always a good place to start, so let me introduce myself. My name is Winston Cely and I was an editor, post supervisor, and post-production business owner for 8 years. I grew up with parents whom worked in both film and advertising and I have managed to maintain a keen interest, working in various related sectors throughout the years.

I became a high school teacher a little over 5 years ago. I began teaching traditional studio art, then accepted the challenge of teaching video production at a career and technology center in South Carolina, USA. Bear in mind, I’m teaching high schoolers how to be filmmakers in the South. A tall order to be sure, but a rewarding one when you see the high school students “get it”. 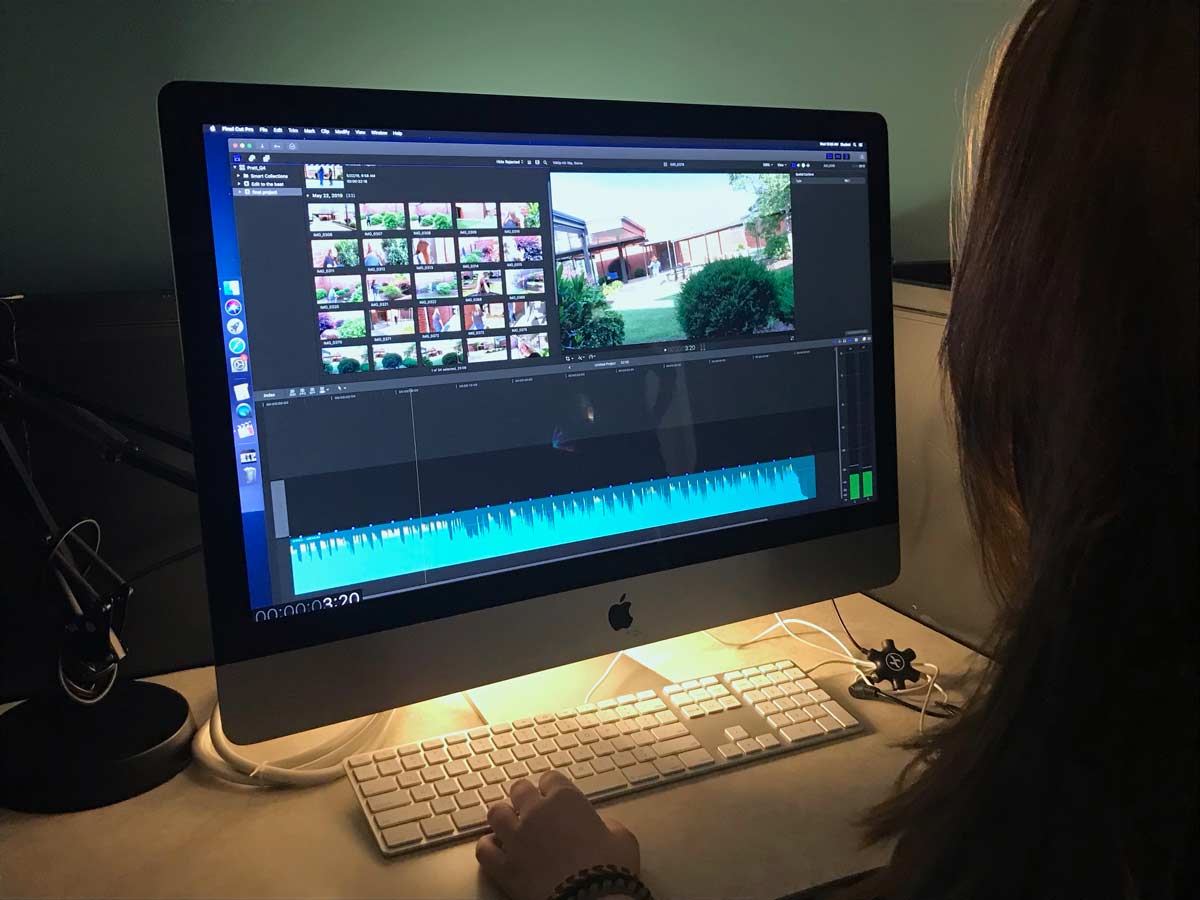 The school I teach at is fairly small, but one of the best career and technology schools in South Carolina. We service four high schools from two different school districts. Our courses cover everything from law enforcement and firefighting, to nail technology and cosmetology, engineering, health and nursing, and even print and digital design.

We offer high school students the chance to get industry certifications in just about everything we teach, and every year, we have a large number of students get recognized nationally for their work. The Media Broadcasting cluster (that holds my film production course and includes the audio editing elements) boasts the first high school radio station in South Carolina, and just won Best High School Radio Station in the nation for the second year in a row at the IBS show in New York City.

Everyone else uses Adobe Premier or Avid, right?

It’s my job to give high school students the skills to get started in the audio and video production business.

With that being said, many times I’m asked why I teach FCPX. “Everyone else uses Adobe Premiere or Avid, right?”

Sure, Hollywood uses Avid and a huge portion of US post-production uses Premiere, because of Apple’s amazingly bad introduction of FCPX. Regardless of the fact that FCPX could be a viable option for them, it isn’t right now.

However, the important part to me as an instructor is teaching my students how to tell a story.

That’s why I use FCPX. It’s built with “story” in mind which means it is easy to use and easy to experiment with.

I’m not concerned with the technical aspects as much as I am with storytelling. FCPX allows me to spend very little time with tech, and more with the story. I love that, and let’s face it, these students are going to go on to colleges and universities that teach Premiere and Avid, so why not make them more valuable by knowing a wider range of audio and video software? 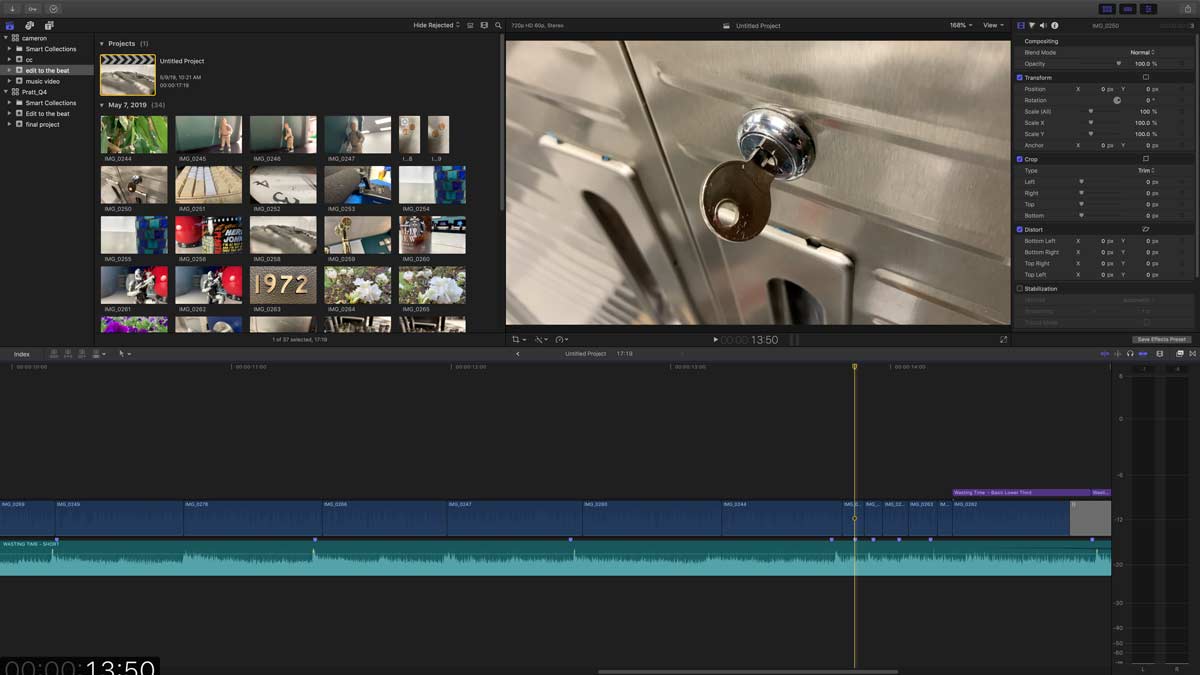 I also enjoy that FCPX is built to encourage people to make the parts (or plug-ins) for it that they need. Instead of bloatware, you get a basic editor that can become exactly what you need without a lot of the ‘fluff’ which you don’t. So big thanks to Apple for thinking in this modular way (something they don’t normally do), and thank you third-party venders for jumping at that opportunity with Final Cut Pro X.

With that in mind, it’s easy to pinpoint the built-in musical aspects of FCPX to be lacklustre at best. What’s built in as far as SFX and music are brutally poor to be kind. I have sophomore students that have complained for years over how nothing built into FCPX was usable - and it’s not. It might be OK for local adverts or putting together a previs, but beyond that, I wouldn’t use any of it outside of a classroom. When you’re trying to teach students the importance of legal use of music and other people’s media, it’s important that they have something they can actually use. 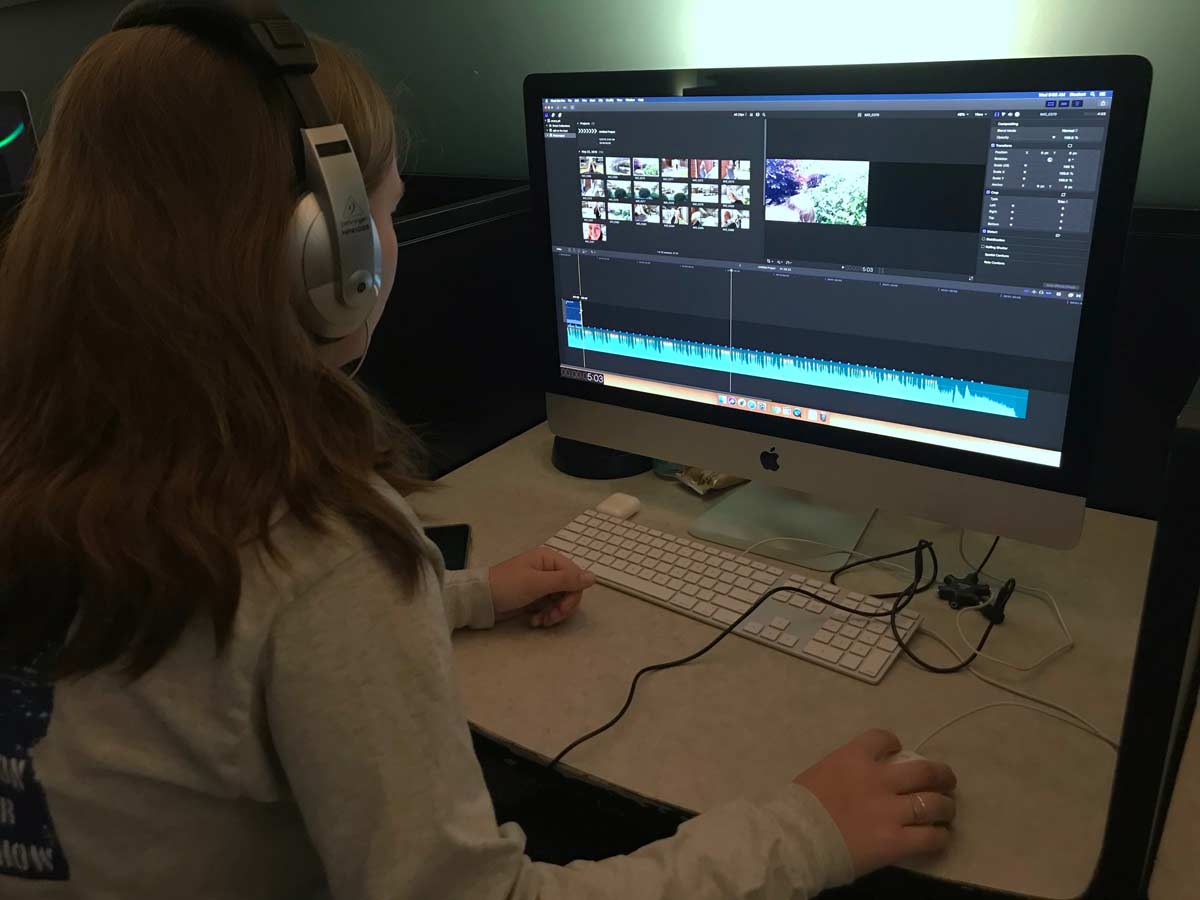 That is where FCP Audio and their ‘SoundStacks’ come in. They have created an amazing set of musical tracks that any filmmaker would be happy with. I could go on about how many genres of music they have, but you should visit their site to get more info on that. I’d like to talk more about application of their audio products. 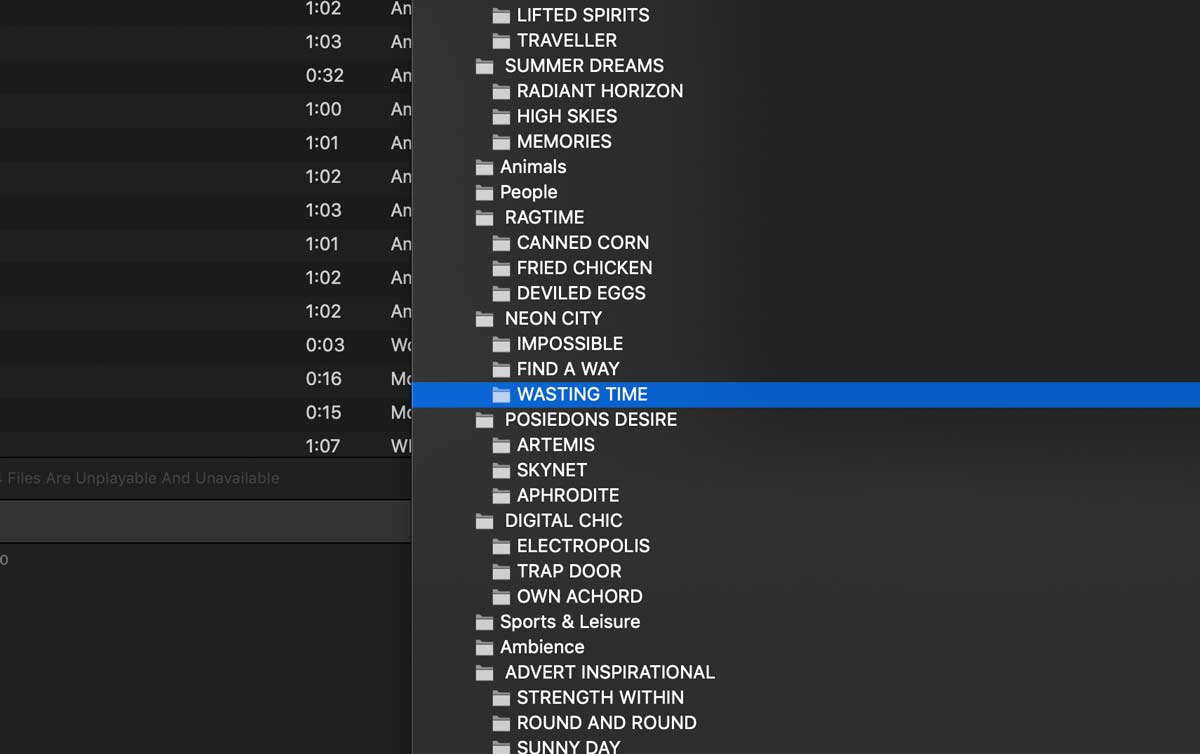 One of my biggest challenges in education is to teach high school students the theory of pacing in video and audio editing. This is pretty difficult because most students come in not even really realizing that there are things like “edits” in a movie.

Which, when you think about it, is a positive reflection on the editors! Editing should be invisible, but it makes it hard on us teachers when we’re trying to open our students to how we assemble a movie out of raw media. 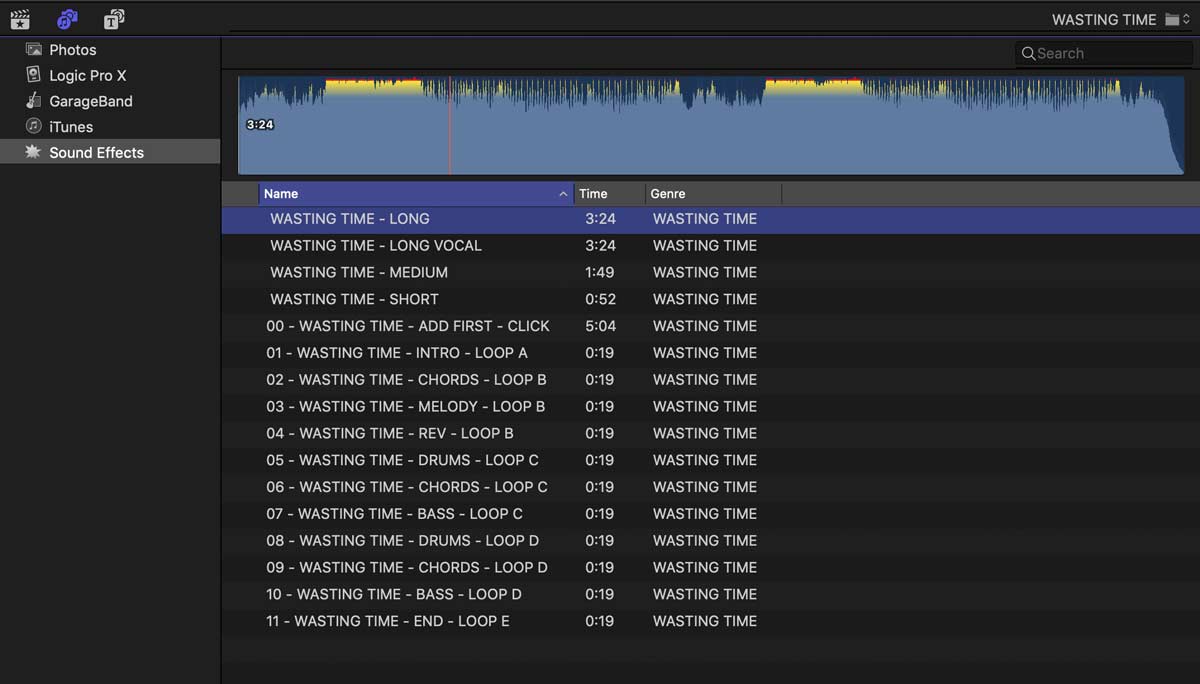 With all of this in mind, I use “editing to the beat” as my first big post-production project with my students. I instruct them to record 24 extreme close up videos, all of which should last at least 10 seconds long. I have the students use their smartphones to record the videos due to time constraints.

We go over the basics of capturing video and using the simplest editing tools in FCPX. In the past, my students were simply using the few built-in music cues that FCPX has already. Needless to say, the students didn’t like the small selection, and I was going nuts listening to the same tracks over and over again. Now that we’ve got FCP Audio, my sophomores were able to create the following examples using Ghost Train Short and Sandstorm Short to complete their projects.

The Difference Using FCP Audio Has Made

With FCP Audio, my sophomores can select from a massive library of professional music. Music that they actually find useful, and enables them to complete the edit to the beat project with something that they are proud of. By the end of the nine weeks, I can have them finish the course with a short film. Here’s an example of one of my sophomore final projects, using the Transcendence piece.

With my juniors, we can go a little bit deeper. We cover how the tracks are made of individual loops and sounds in the ‘SoundStacks library.’ Trying to reconstruct the short version, to get a simplified grasp of how the ‘SoundStacks’ work.

Now the students are able to pull full tracks, or simple loops, or the more ambitious or musically inclined students will actually go back and create their own music. This (loop from Almost) above and this (loop used from Everybody Dance) below are examples of a B-roll projects that my students did early in the year in which they used a loop instead of the full track.

My seniors have been involved in a few projects lately, creating a public service announcement for a youth-oriented environmental sustainability program getting started here in South Carolina, along with a short film festival (Lander Film Festival) at Lander University in Greenwood, SC.

Here’s an example of the first project for the PSA (track New Beginning Long). Below is an example of the LFF project (track One Drink Guitar Loop A). As you can see, having the right piece of music has really helped these student projects move beyond typical high school student films.

As far as my students are concerned, they love having this new library of music to choose from. They’ve been a little intimidated by the endless possibilities of the ‘SoundStacks,’ but are also happy that they are always able to find something that will work for their story. Of course, I get complaints that they can’t use the latest pop-hits from the radio, but that will never change.

What the FCP Audio library has done for my students is to give them music that is the equivalent to those pop-hits, no matter what the genre of music is. Not to mention it’s easy! As easy as it is to edit in FCPX to tell their story. They can now add professional customized audio to raise the quality of their video and audio project. 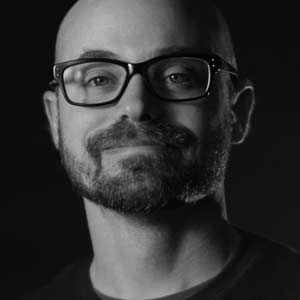 Winston A. Cely is a teacher and editor living in South Carolina. After graduating in 1999, he began working professionally in Seattle, WA before moving back with his wife to raise a family and teach film production to high school students. During his summer breaks, he still works as an editor and motion graphics designer while raising two children.