Refuge in the Heartland: A Case Study in Shared Workflow with Student Editors

Rusty Earl returns to FCP.co with another great Final Cut Pro X user story. This time, a story made with a shared workflow with student editors. How did it work and how did they get around project slow downs?

A new world right in your backyard.

Most Americans are unaware of the refugees living in their communities, I know I was. Years ago, I worked in Stockton California; a city with about 300,000 people including a large population of first and second generation refugees from post-Vietnam.

The Hmong, Cambodians, Laotion, and Vietnamese were been brought to the Bay area after 1975 and found refuge in the cities and suburbs of North western California. It was not an easy transition for them or the surrounding communities. Little did I know how their lives would affect me.

Fast forward to 2017. Now working as a video producer for the college of education at Kansas State University an opportunity came up to create a film about refugee resettlement in the Midwest.

Gratefully, an enthusiastic colleague and a supportive Dean were in favor of creating a new resource to aid refugee students and teachers in Kansas and I was all in. In August of 2017 we got started on a yearlong project to investigate and document the work of teachers and community partners helping to resettle refugees in Wichita, KS. That work turned into the film "Refuge in the Heartland," a 70 minute documentary.

Some of the topics we explore are language acquisition for diverse students, acculturation vs assimilation, helping students overcome trauma, working with community partners, as well as the personal stories of refugee families. The goal of the project is to educate all who work with refugee students and their families in order to provide a better educational experience for refugee students.

We will be releasing the film online on November 21st, 2018 and will be available to watch here.

Behind the scenes video: 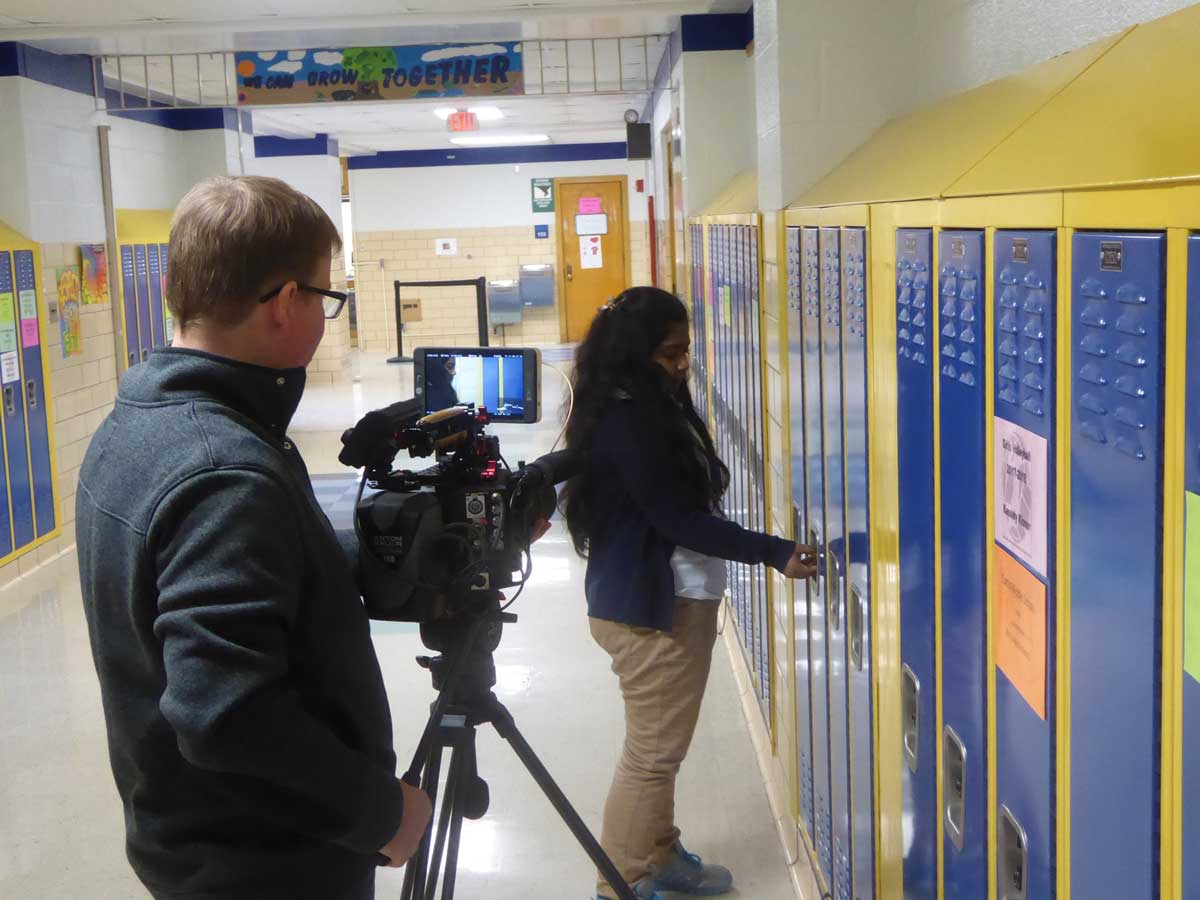 We edited the film using three 2013 mac pros connected to an XSAN server with 16Gig fiber connection to each machine. The XSAN uses a Raid 10 configuration with a mix of SSD and Hard drives. Average read and write speeds are (850write) and (900read) sustained.

Using the Library Inspector, we stored all media including cache files in the project media folder. We then created 3 duplicate libraries (pointing at the media), one for each editor. Backups live on the local drive on each MacPro. 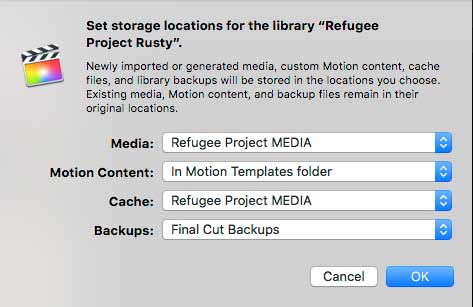 We optimized and created proxies for all footage and used a proxy workflow for the first nine months until we started working on color and sound.

Working in collaboration with students:

For the past five years, I have had the pleasure to work with a number of talented student editors at Kansas State University. Many of them were journalism or marketing majors looking for work experience while attending school.

I’ve had really good luck with student assistants and try to keep them as long I can. They film, edit, interview, and help produce most of the content for our colleges YouTube channel as well as our yearly documentary programs. This year Hannah, Safiya, and Kyle (our new media production assistant) worked on “Refuge in the Heartland”. 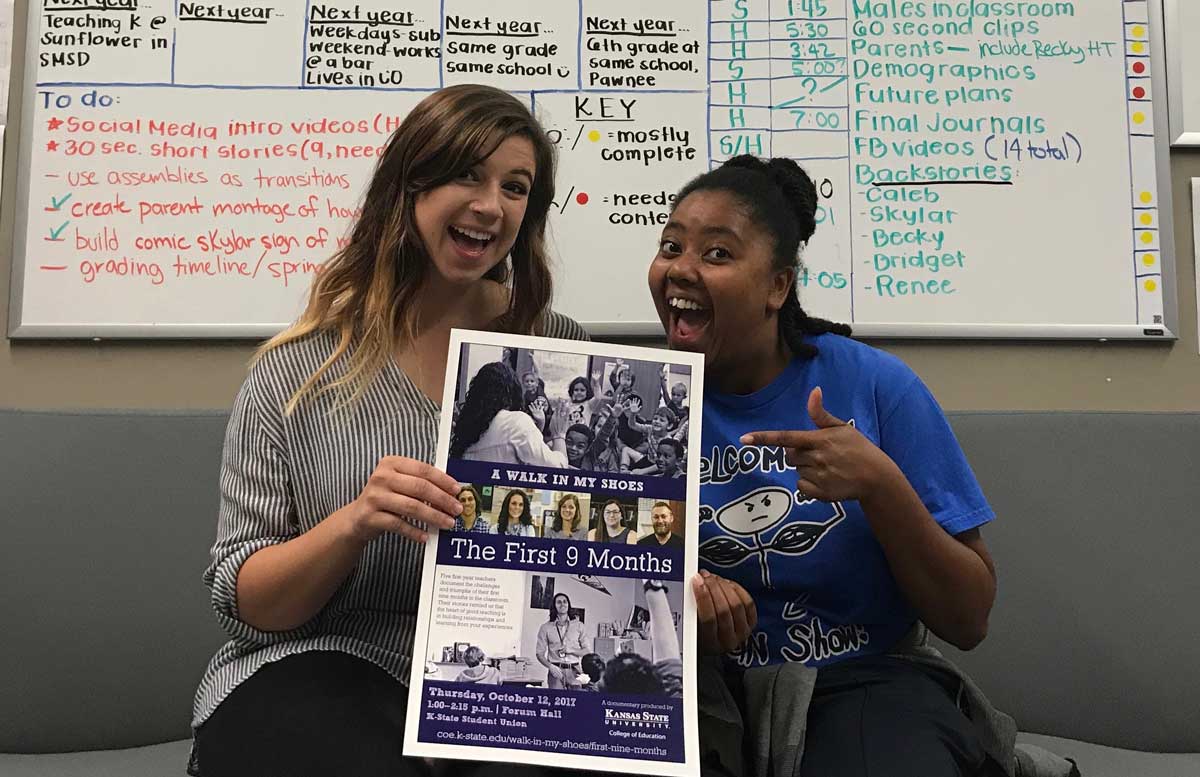 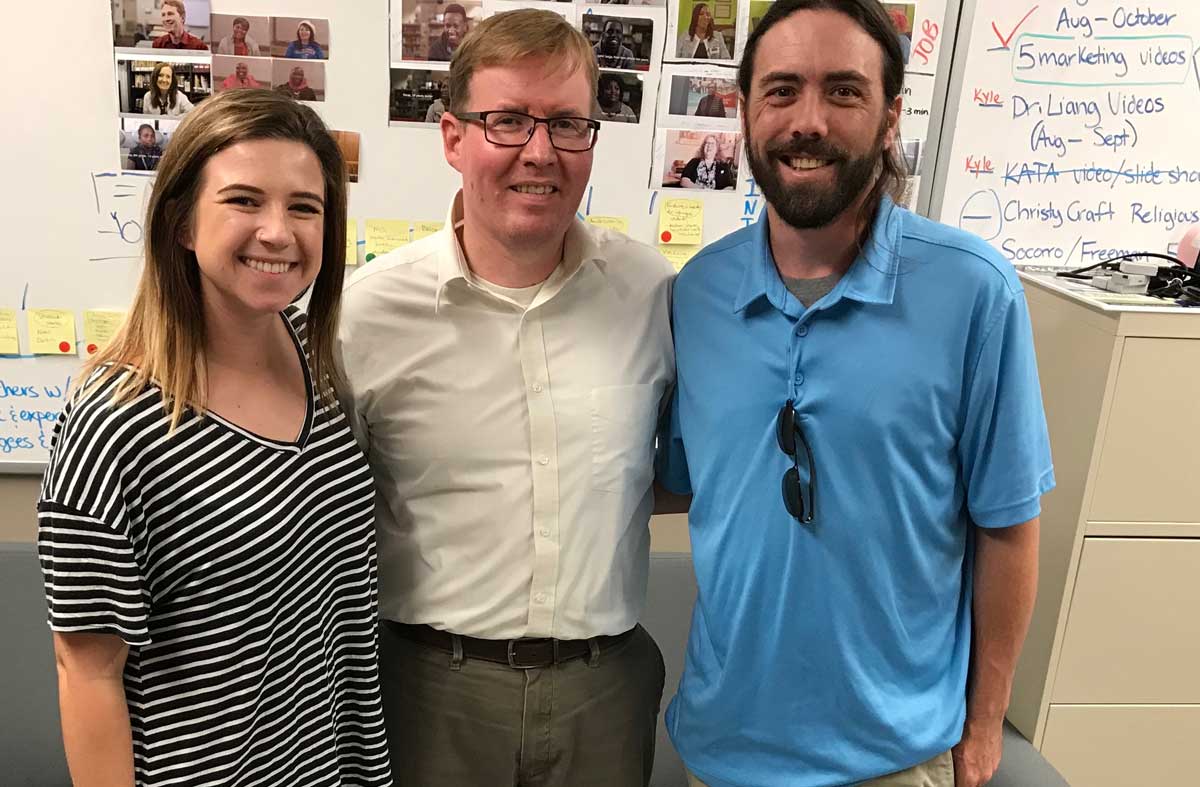 Hannah was in charge of ingest, key wording, favoriting, and duplicating events from one library to another. Since we needed to have duplicate libraries for certain XML transfers to work she was in charge of making sure we all had the same media.

Safiya was in charge of creating multicam clips for all of our interviews and tagging all of the talking points. This was a big task considering we conducted more than 40 interviews.

Kyle came in the last three months and worked on rough cutting some of the final storylines along with Hannah and Safiya. Every other week we took turns watching each other’s rough cuts and making comments about overlap in storilines and how visuals were being used. 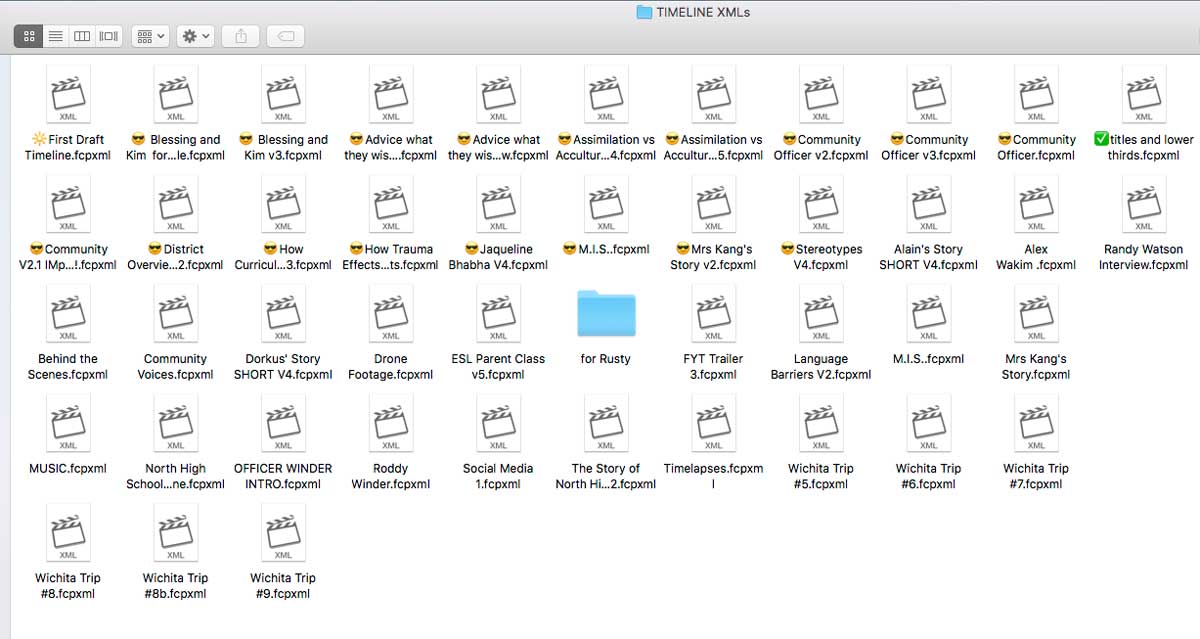 To speed up editing, all three editors would build rough cuts of assigned storylines and then share each project via XML to a shared folder on our server so that I could import them and work with them.

We saved several versions of each project (as snapshots) as a way to move forwards with creative choices while leaving an opening to go back as needed. There were a few times we felt we left too much on the cutting room floor and needed to go back to the original interviews edits.

We built one project for each long interview (20minutes or longer) and a few conglomerate projects for short interviews. With snap shot versions, we had over 140 projects by the time we were done.

Editing ran smoothly for the first 9 months while we were in proxy mode. Once we switched back to original media and started adding effects we started to experience major slowdowns. Our original libraries that used to open within 1 minute now took 15 minutes to load. I should mention that this has become a normal pattern for us on long form projects with thousands of clips and third party effects.

To speed things up we were restarting our mac pros on a daily basis and moving older projects from one library to another we labeled “overflow”. That helped to a small degree but we still found our libraries taking 15-20 minutes to open all of the way.

I worked with Brad Olsen and Sam Mestman to review my workflow and see how we could improve things. To my surprise, we found out that the creation of “duplicate project as snapshot” seemed to be our biggest culprit. Sam told me that creating snapshot versions of projects actually copies more data than duplicating projects. . . 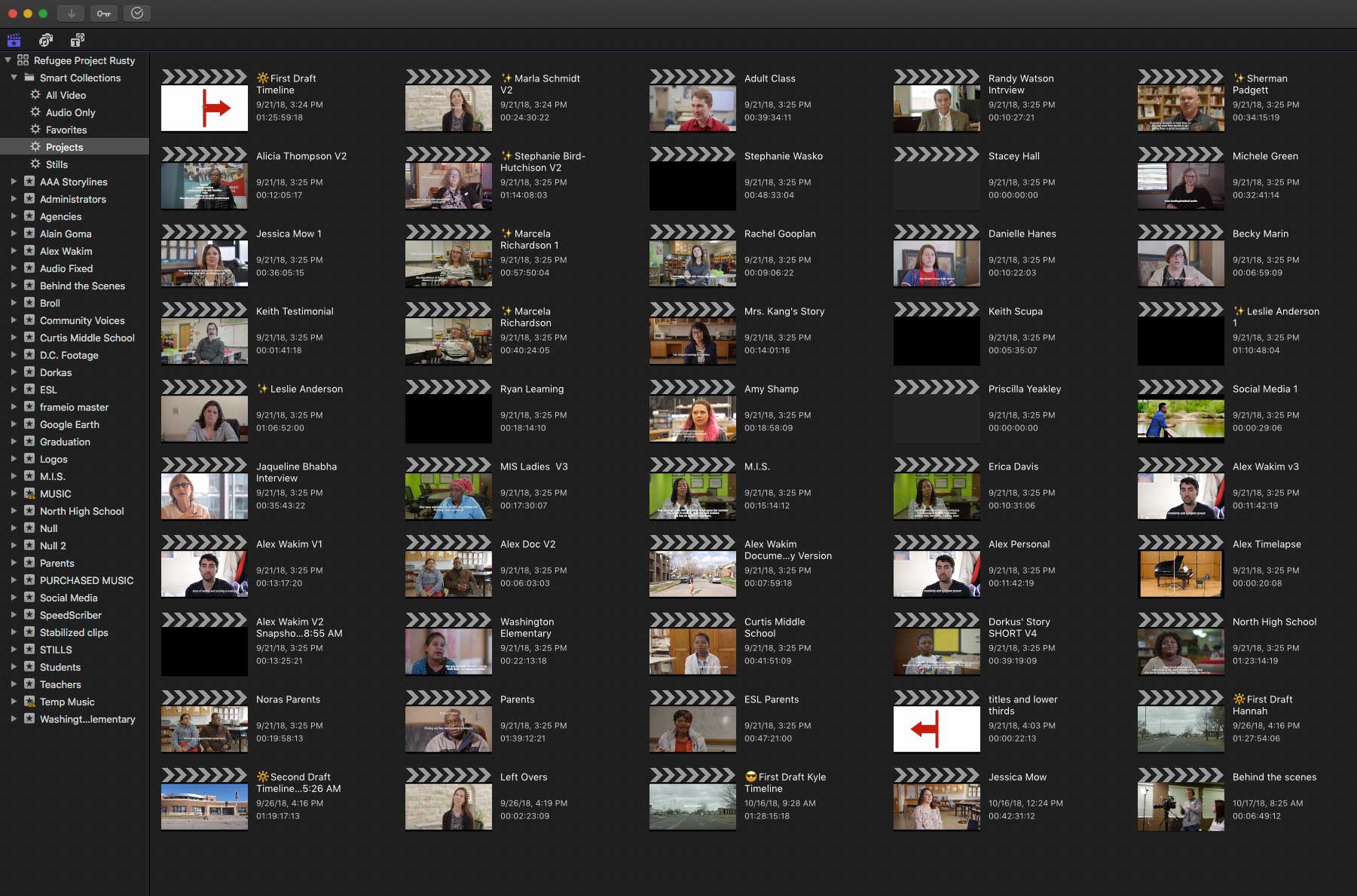 So creating 80+ duplicate projects as snapshots was really slowing us down. At the advice of Sam we deleted all of our rendered files and created a clean library for the final timelines. Things speed back up dramatically, though not as fast as when the project was first going. Our assumption is that with time there was some corruption of linked files and with the inevitable buildup of third party effects it was never going to be as fast as at the beginning.

Our biggest plugin that caused slowdowns was Izotope RX dialogue denoiser. The plugin works fantastic at cleaning up audio noise right inside FCPX.

Unfortunately, it is also very GPU intensive. When used on a few clips in a 5 to 10-minute timeline it has no issues, but on a lot of clips in a 70-minute doc it will really slows you down. For the past 4 years we have attempted to do all of the audio work inside Final Cut with occasional files being exported out for clean up inside of Isotope RX Audio Editor.

I want to get to a point where we can get everything in picture lock mode and then export the audio out as stem roles that can be cleaned and brought back inside FCPX. . .

Near the end of editing we had a total of 16 chapters plus an intro sequence. We kept each chapter enclosed in a compound clip so that we could quickly reorder the chapters to see how well they played in sequence.

This also made it easier to assign last minute changes to three editors. Each editor would correct the final chapters and then send an XML of the timeline back to me for final polishing. We had a number of watch parties where we would run through the whole film looking for places to tightened the story, flag issues, and overlap of b-roll.

For each watch party, we uploaded a light version of the film to frame.io and played it back on a large screen while we paused and to take notes. It really helped to speed things up last few weeks. It was also helpful to have all of our eyes on the film to issues in captions or reused b-roll.

Using compound clips to keep chapters separated and to make them easier to move. 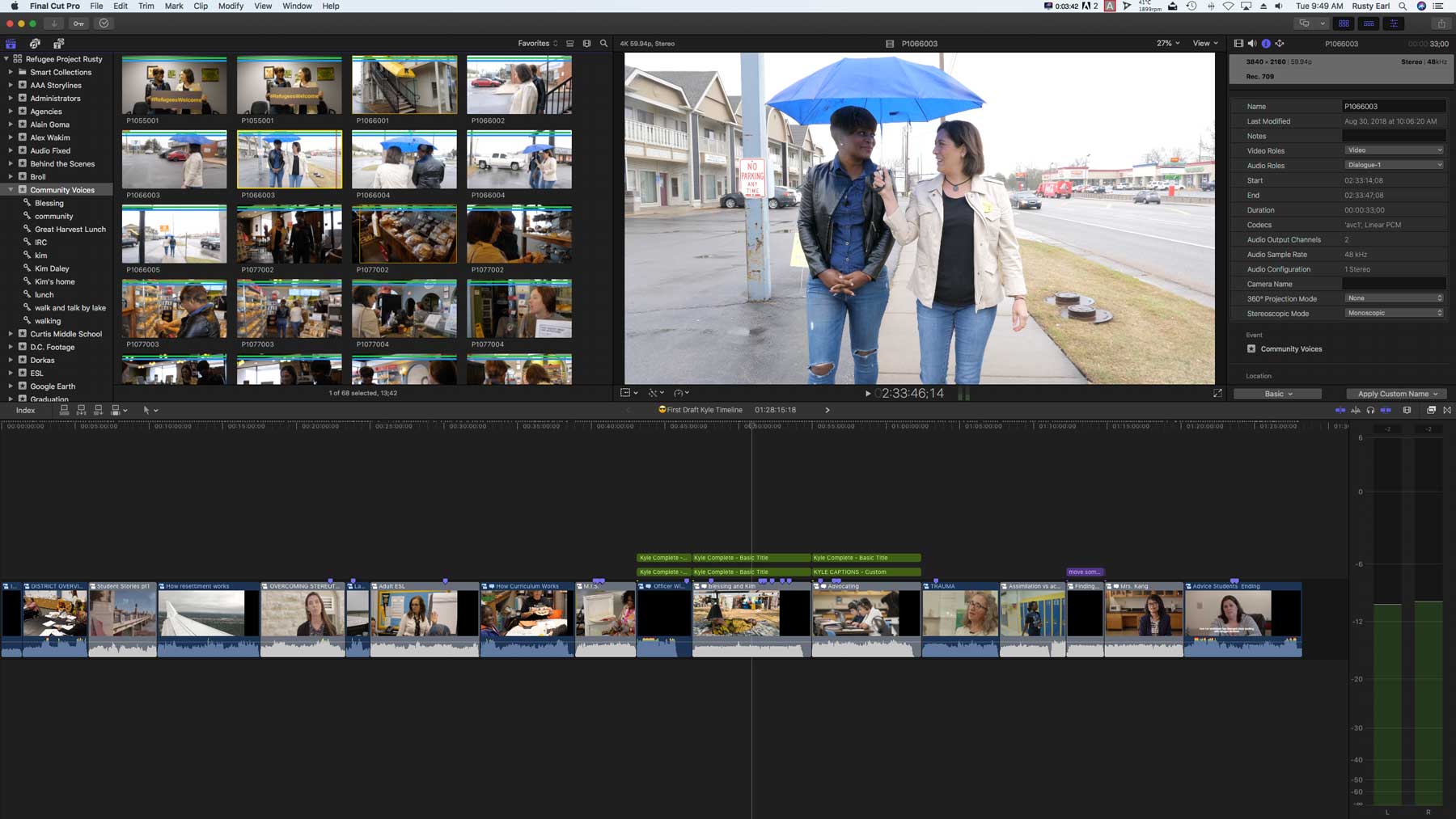 Same chapter opened up for editing in a compound clip. 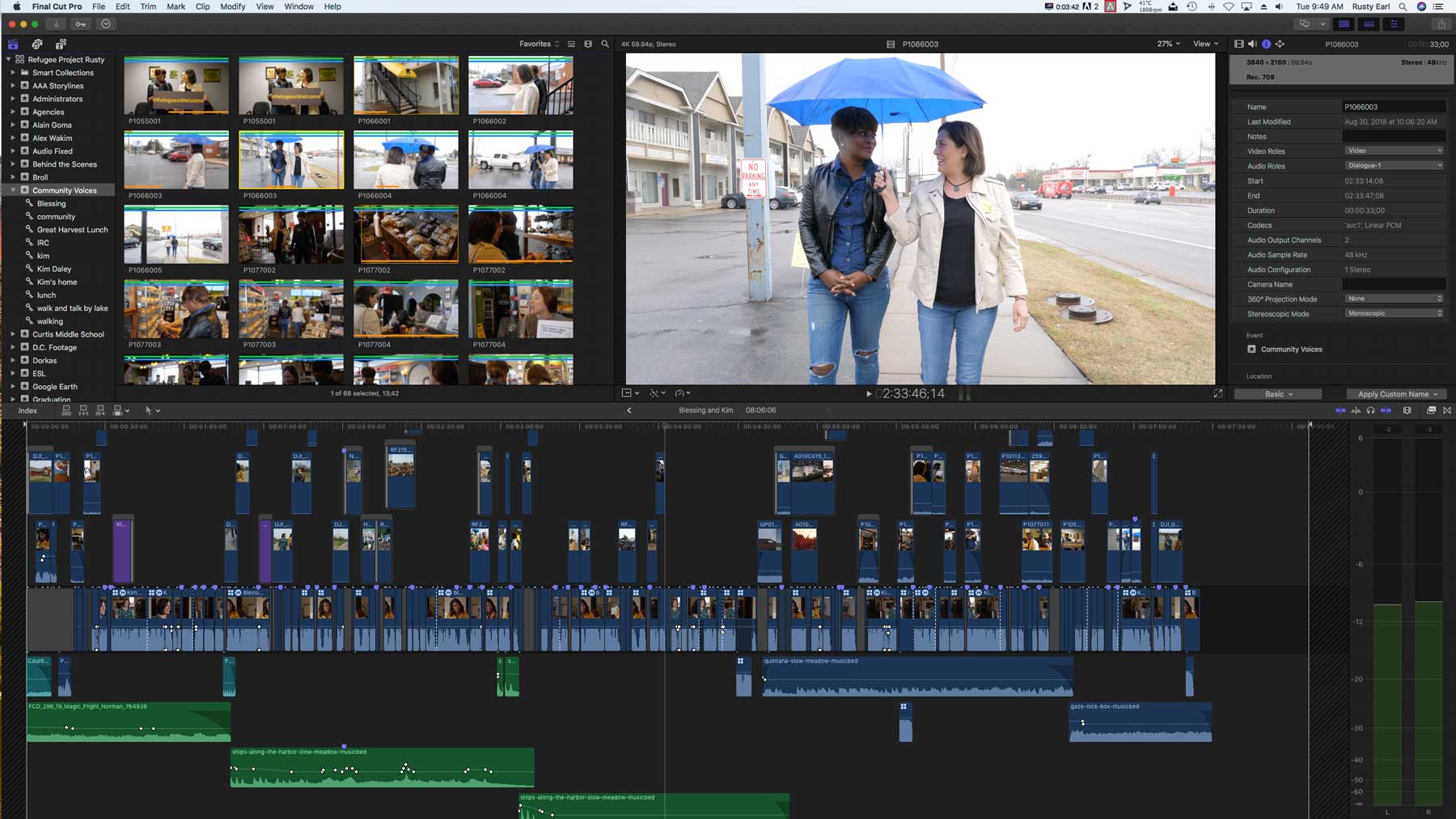 This was our first large project to create captions using FCPX built in caption generator. With the help of SpeedScriber we made pretty quick work of generating all the captions although we accidently brought them in as ITT captions first and had to reformat them to 608 for closed captioning to show up in QuickTime player. Editing captions is best done in SpeedScriber before bringing them into final cut, but it was still manageable. Special thanks to Mark Spencer and Steve Martin for their fabulous tutorials on using SpeedScriber and creating closed captions inside FCPX!

Working with different student editors has really helped me to rethink the way I approach the editing process. Because I spend a fair amount of time training them on FCPX it helps me to solidify processes to help them edit quicker and allows me to really think about our workflow on small to large projects. I’ve come to appreciate the skill and dedication of my student workers. When you give them the opportunity to take charge of something they care about they almost never disappoint. I’d encourage everyone to give new editors more opportunities to work on projects even if it is just showing for a few days. You might be surprised at how much you can teach them and how much they have to offer you. 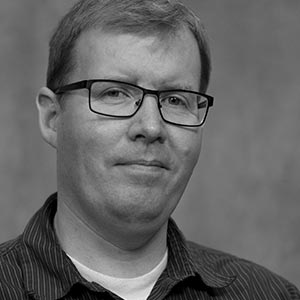 Rusty Earl is a Producer & FCPX Editor based in Manhattan, Kansas
He has produced over a dozen documentary films on a variety of educational topics including African American History in Kansas.
He is best known for his short film: “My Brother Hyrum”

Please take a look at my documentary blog.