When given the task of cutting a 34 angle multicam music show in Premiere Pro, Shahin Shokoui accepted the job but decided to move the project over to Final Cut Pro X. After a successful edit, he then converted the final cuts back.

I just finished my second bigger job with Multicams. The first one was an MTV Unplugged with a famous German singer called Marius Müller Westernhagen. I did talk about it on the FCPX Tour 2016 in Berlin which hopefully you might have seen. At that point I was proud to demonstrate that I started with a 12 angle Multicam and that grew into a 24 angle multicam.

I was especially proud to tell that to the (near) entire Adobe video department which happened to meet at a coffee place I use to frequent quite often. A guy I know introduced me to them and said: "Now you can ask all the questions you will ever think of. I didn’t have any but they had.

The head of the department was pretty sure that I would go back to Premiere soon. Why would he know that I never really was keen on PP. (Sure my most clicked job was edited on PP, but the Director who is also an After Effects guy urged me to edit in PP and is pretty annoyed with PP by now)

I had to do some jobs on PP during the years but I started to use Final Cut Pro X the 1st day it was released. Ok I just looked on the Applestore it was the 3rd day. I was on a job at that time and I remember I couldn't wait to go home and download it!

I also remember the more I read about the reactions from people when FCPX lauched, the more I was sure that it's not the software, it's the people who don’t accept change. So I told the head Adobe guy that I liked to use a tool with enough power to handle 24 angles of video with an GUI that respects me. We talked respectfully for the next 10 Minutes and then they left.

I was offered a new MTV Unplugged for Samy Deluxe, a German Rapper last month. I knew that the production company Paul’s Boutique works with Premiere Pro mainly and they knew that I like to work on FCPX. So I just did a quick check on how I could hand over a multicam from FCPX to PP because I could not imagine working on a multi camera Project without a Multicam Clip (We’re gonna count how many times I wrote Multicam later). The other editor managed to edit without MCs on PP. I seriously don’t understand how, but the results were very nice. Anyway I just finished the job.

This time I was not the main editor but ended up editing most of the tracks. I tried a workflow which worked really well. And that's is what I wanted to share with you. 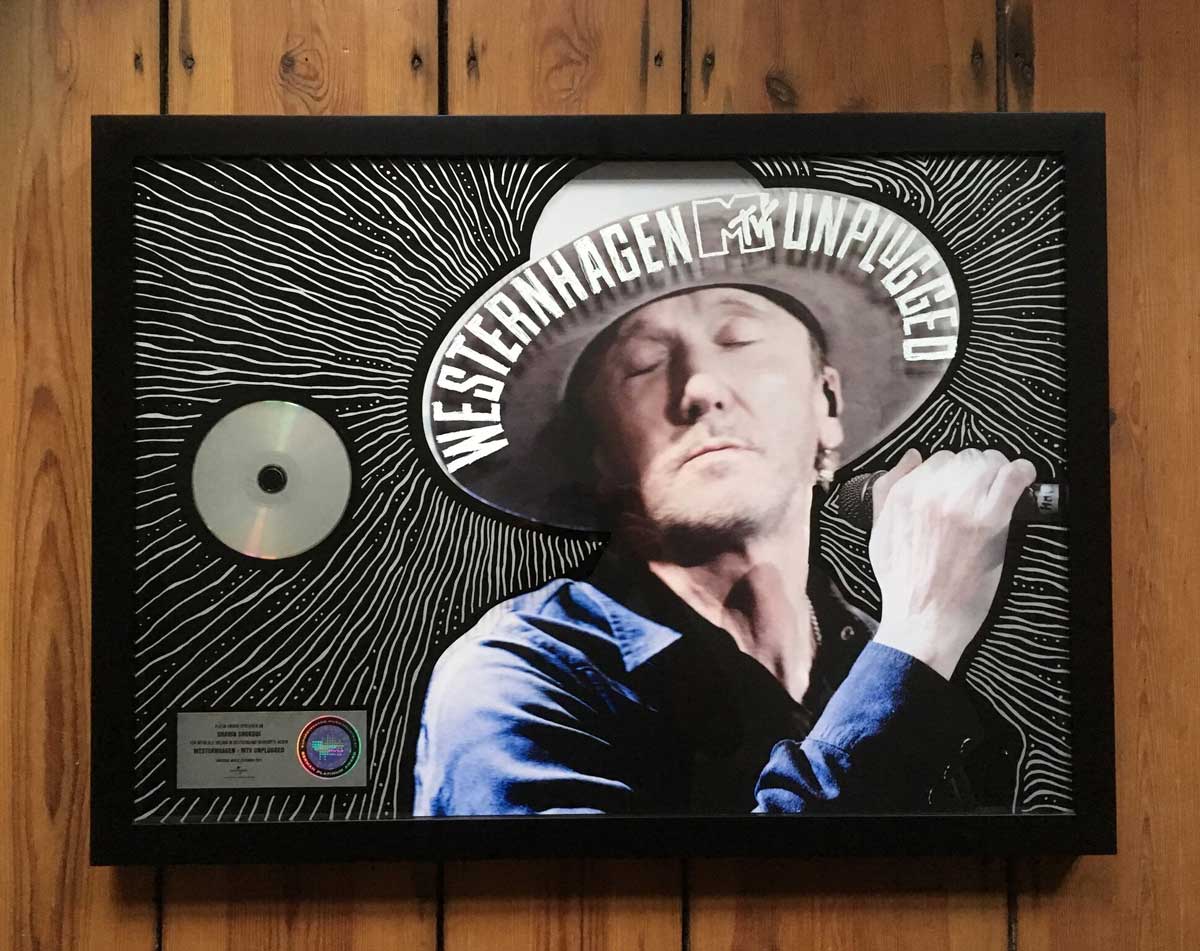 What I got to start of with was a PP file with about 44 Sequences. Each one represented one or sometimes more than one song. This is what a sequence looked like. Stacked Cameras as layers. Synced by the other Editor some with timecode and some with Plural Eyes. Mostly 12 angles for Friday, 12 for Saturday, 12 for Sunday and sometimes even an encore. 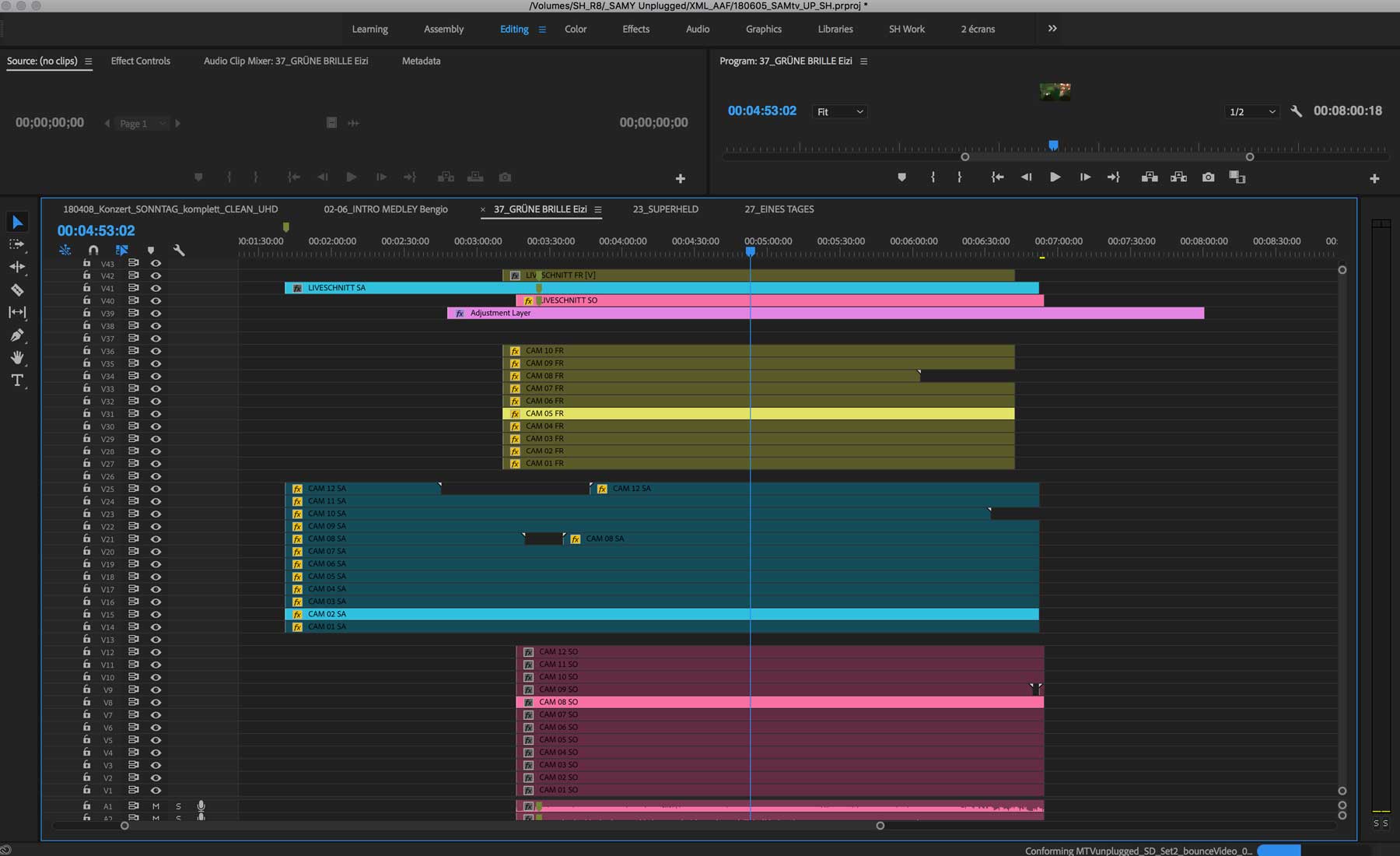 This is what I did: I created a Library on the RAID with the following settings:

In Premiere Pro I opened a sequence and relinked to the clips on my RAID.

Exporting an FCPXML from Premiere (Is this Adobe trolling? I don’t know)

I opened the XML in SendToX and exported it to my Library. What I got was an Event with the Timeline and the clips.

I relinked the clips in FCPX (FCPX linked to all the right clips even though there were some very similar filenames.) That's because there were a lot of Sony A7 Files which were named the same e.g. C0006) 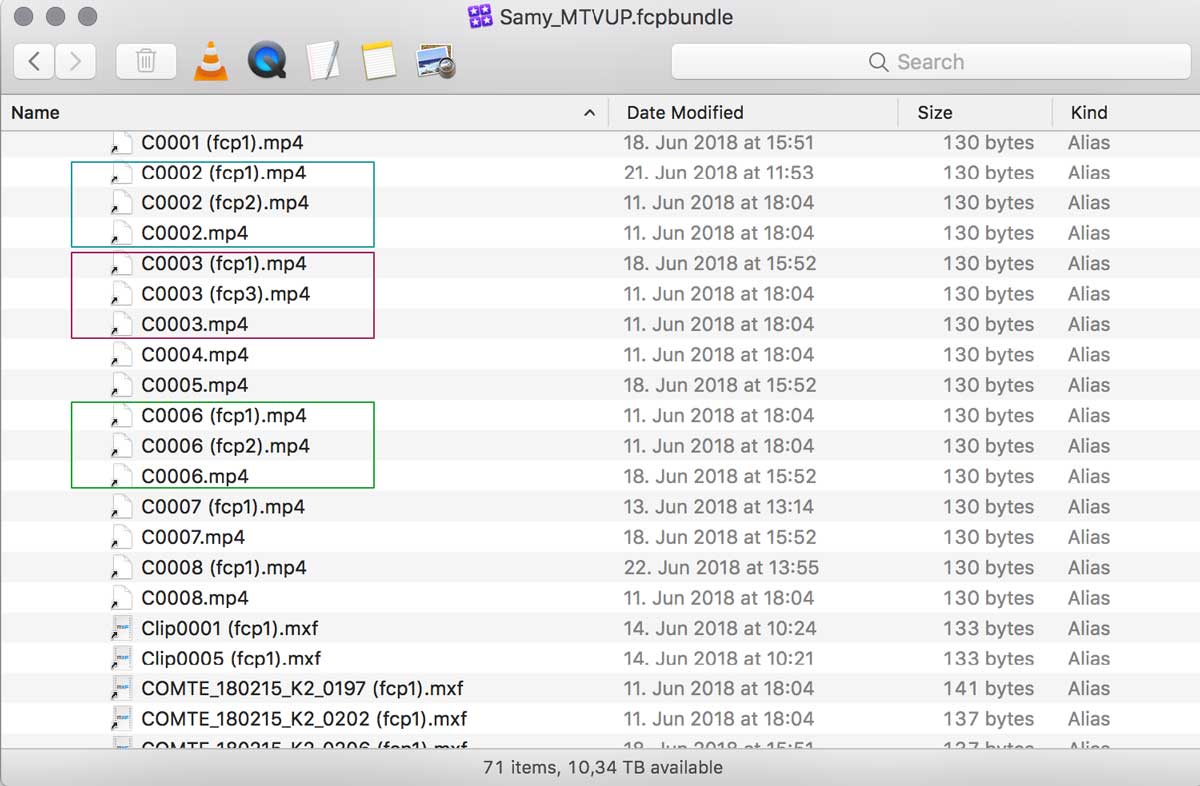 I transcoded the clips of the first songs to proxies (about 2 days) to able to start. Later I let FCPX transcode during the night.

I duplicated the timeline, aka sequence, aka project just to have an untouched original.

I went through the new timeline and gave each clip a proper camera name 1-12 Friday 1-12 Saturday and 1-12 Sunday (I could not use Clipnames to sync to a Multicam because some of the cameras stopped and got a new name.)

As you see in the PP screenshot earlier some of the clips started at the timeline IN but some later so I selected only the ones with the matching IN and revealed them in the browser.

Then I used a filter called BIG SEARCH on Library level to filter which keyword ranges I wanted and selected them.

After that I created a Multicam with the “first marker on clip” option.

I went back to the duplicated timeline and took care of the remaining angles, which meant that I had to remember the timeslip. Revealing the clip gave it a Keyword-range and brought  the clip into the MC at the right IN.

I had to reorder the Angles so that I had the 12 Cameras from the right day on each Multicam Page. I created some blank angles to achieve that since I can only show 8 or 16 angles at once. 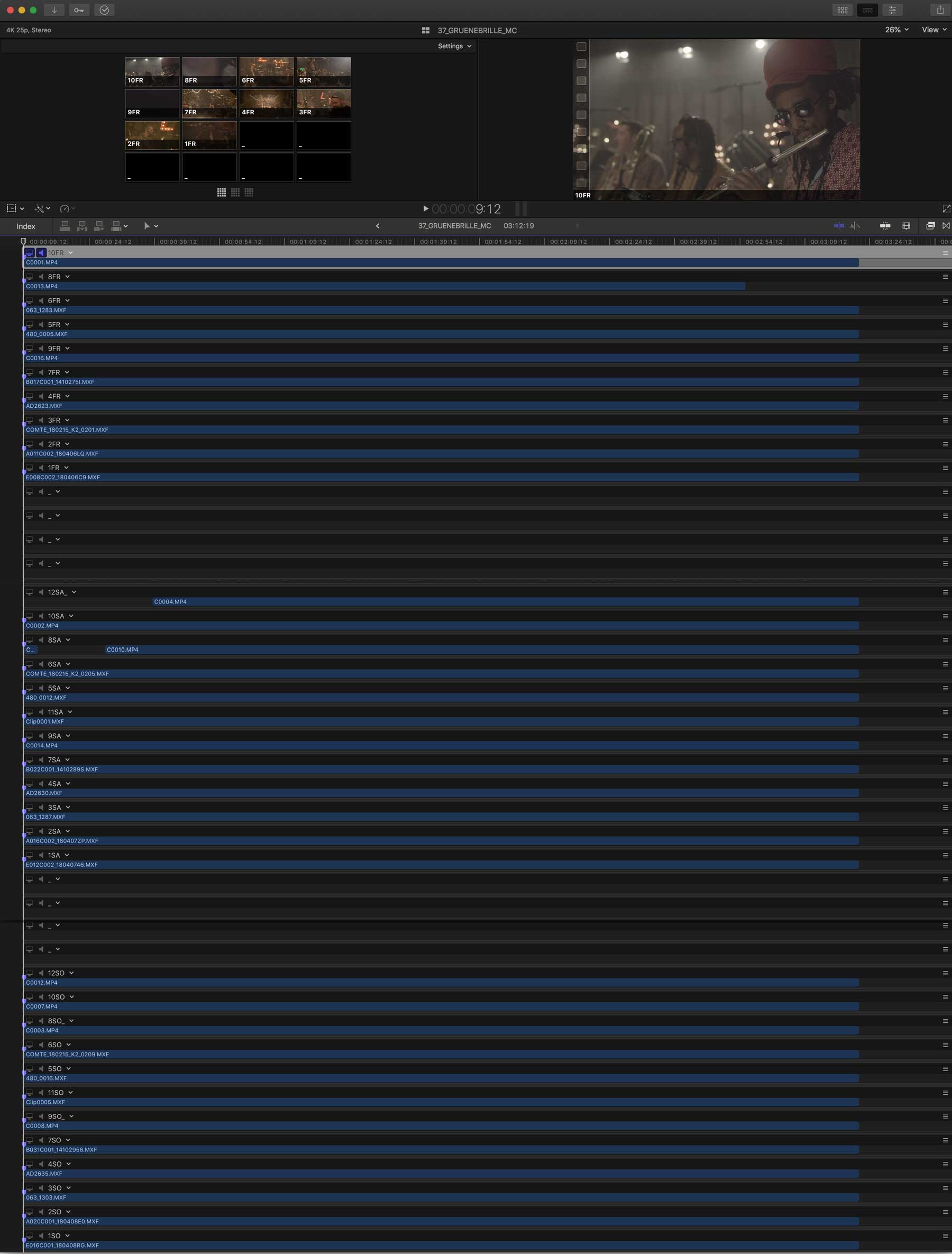 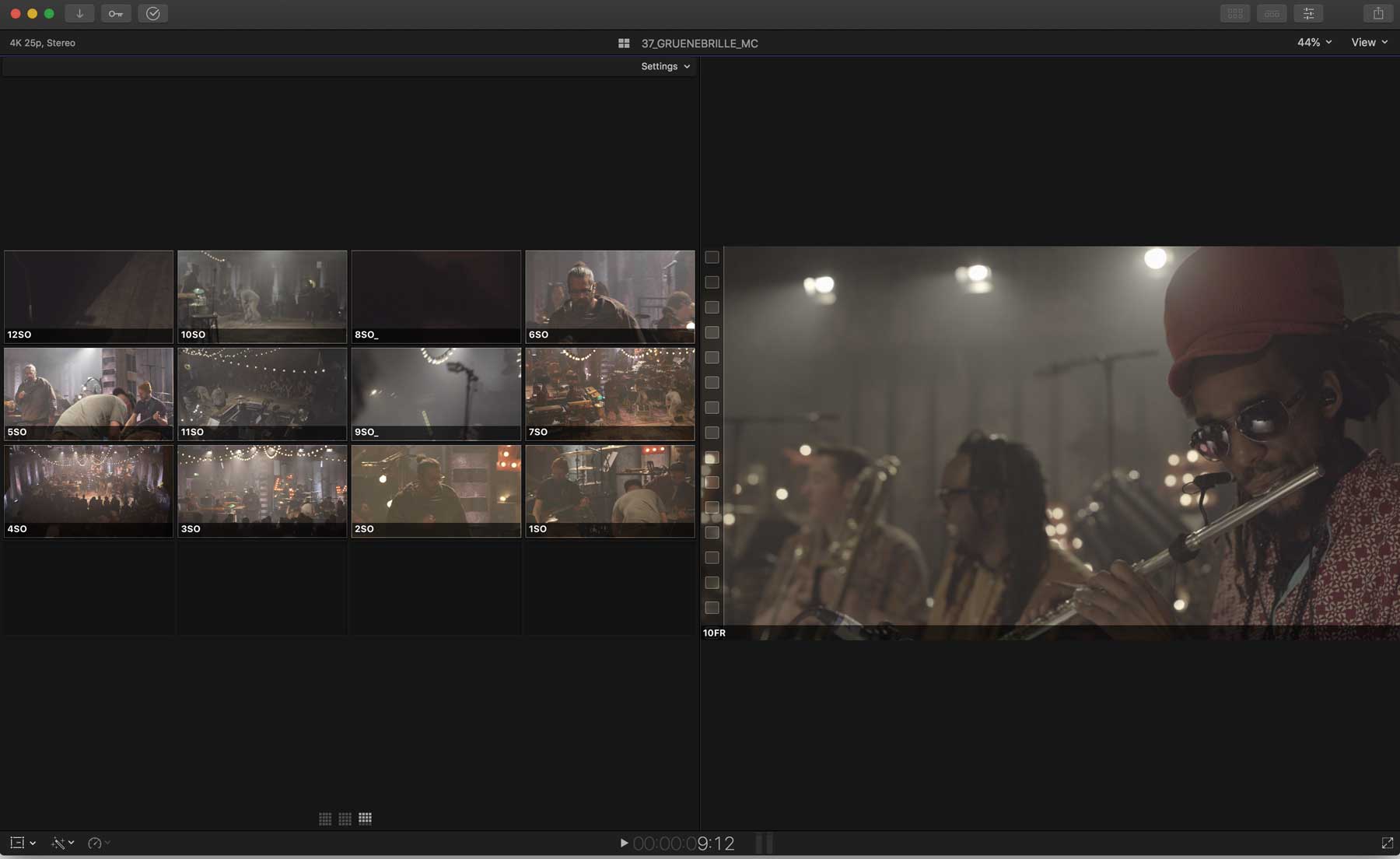 Then I started editing a roughcut to get the feeling for that particular song. For that I like to use the mouse in the angle viewer even though I’m a shortcut guy. So I played the song and chose angles that I would like to see at that particular moment. Of course sometimes it was not the right camera but luckily FCPX handles the undo better than in Legacy FCP. I remember that you lost every edit from the “live session” each time you chose undo, at least in FCP 6. That was the last version I owned.  (Same thing happens in Premiere Pro - Editor) 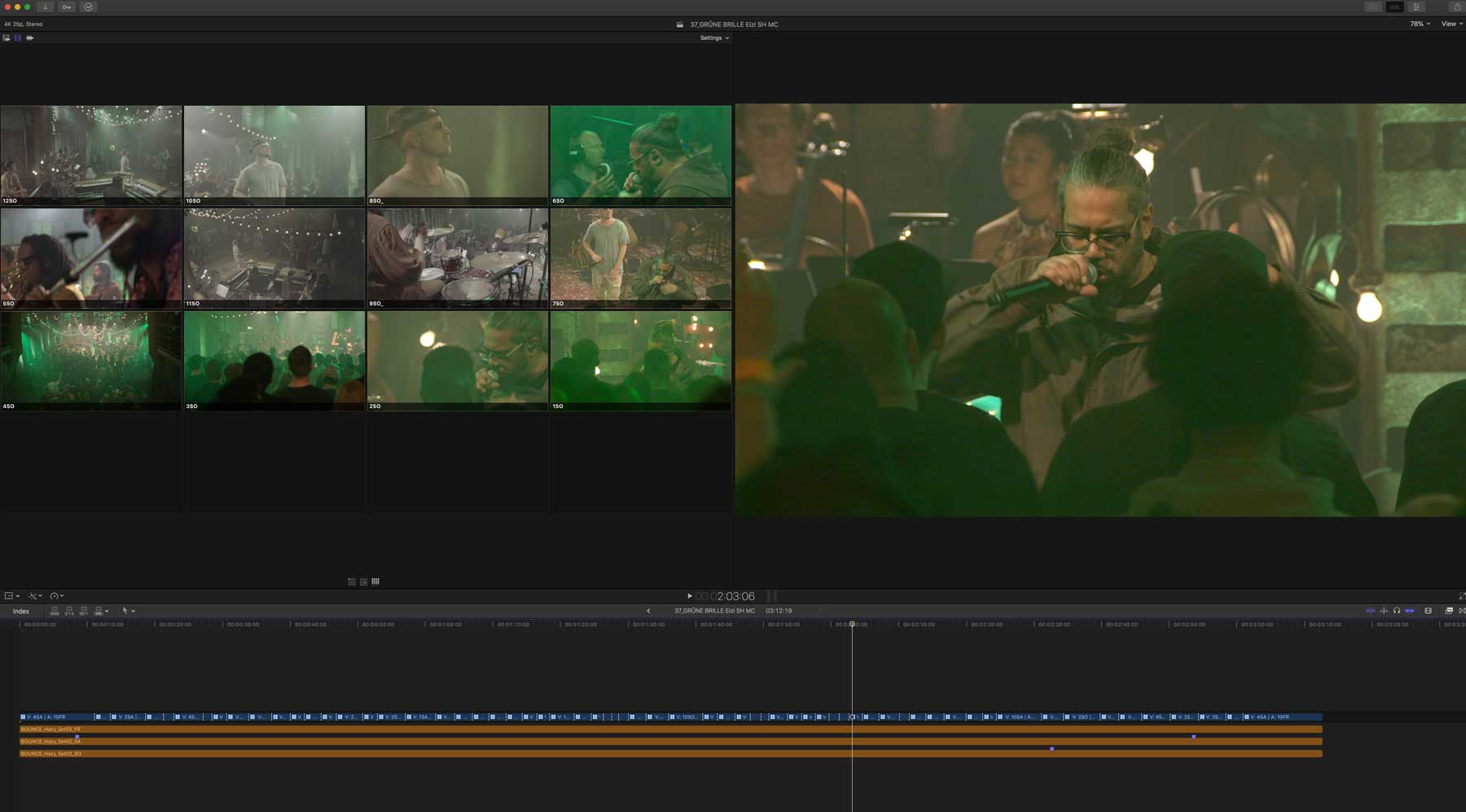 After the roughcut I went through the edit to see how the different angles work. If it was OK, I tried to find better alternatives in the other multicam pages. After I was satisfied I went on to an other song to keep some 'headspace' from the one that I'd been working on.

Then I came back and started with a second edit which included revisiting the angles a second/third/forth time followed by a trimming session.

WHISHLIST: I would love the shortcuts to work in Fullscreen. That would have saved me some time and I’d stay more in the flow. I would choose and editpoint and trim it, revise it, maybe trim again and watch everything in fullscreen.

That could take a while of course. Sometimes I did not look at the first cut for a day and came back the second day. The songs were quite different, some were fast, some were crowd driven, which means that you would look at how the crowd reacted & cheered more often and some other tracks were slow. Surprisingly the slowest song which was also not too long, needed the most versions. It was very interesting to edit many different songs given all their different styles.

From Premiere to Premiere with Intelligent Assistance

From my first experience with a big multicam production like this and with T.Paytons support at that time, I learned what helps to keep the speed and performance up with FCPX.

What can I say, I have now worked a lot with FCP and other NLEs (I never touched AVID in my life I have to admit ) and my workflow worked well. The only situation that sometimes occurred, had to do with speed- and size changes. But I’d rather do the onlining for free in another NLE than do the editing in Premiere Pro.

The last funny thing that happened to me was with a producer who called me and asked if I could help them with the onlining of a FCPX project.

I said that I didn't understand. Do you need to do anything further with the Project? She said no, but the editor used a lot of filters and now the director wants the movie as it is.

I must have sounded like someone from Wonderland and also lost a job when I told them how to switch to optimized/original (if even necessary) and export the timeline. 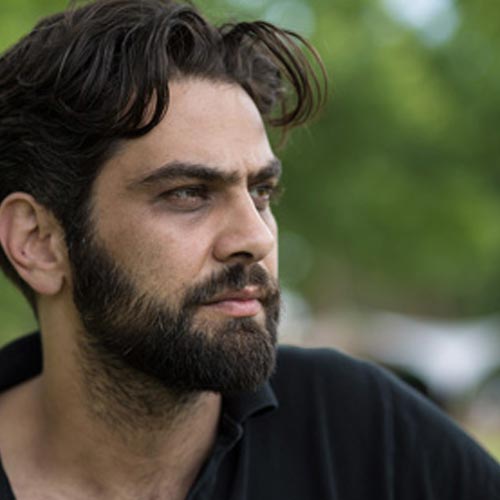 Shahin Shokoui is an editor and director based in Hamburg, Germany.