When trying to disto
mrdemaio

Can you recommend so
Larrie
✎ Latest Free FCPX Effects

First article of the New Year and it's one that a lot of people have asked for, real statistics on the Apple Pro Video Apps running on a new iMac Pro. Ben Balser had a new machine arrive just in time for the holiday break. He gave it a good test, it's fast, but it's not all great news.

It’s December 2017 and the new iMac Pro has been released. But how powerful is it really?

The specs on paper are impressive, at least. So how does it stand up to the late 2013 Mac Pro? In this article I will explore the differences, specifically pertaining to the Apple Pro Video Apps.

Let me begin as all good performance comparisons should be done, with the specs of the two Macs I’ll be testing. 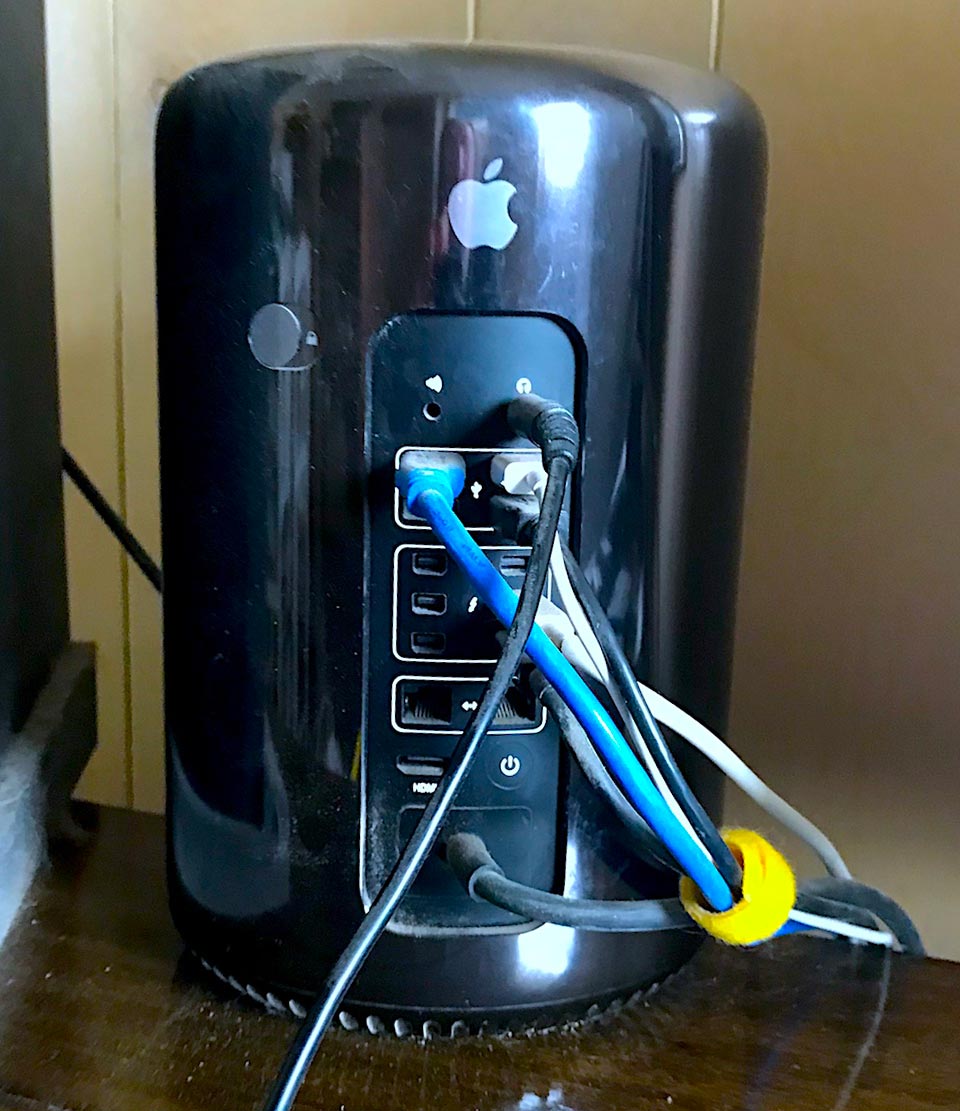 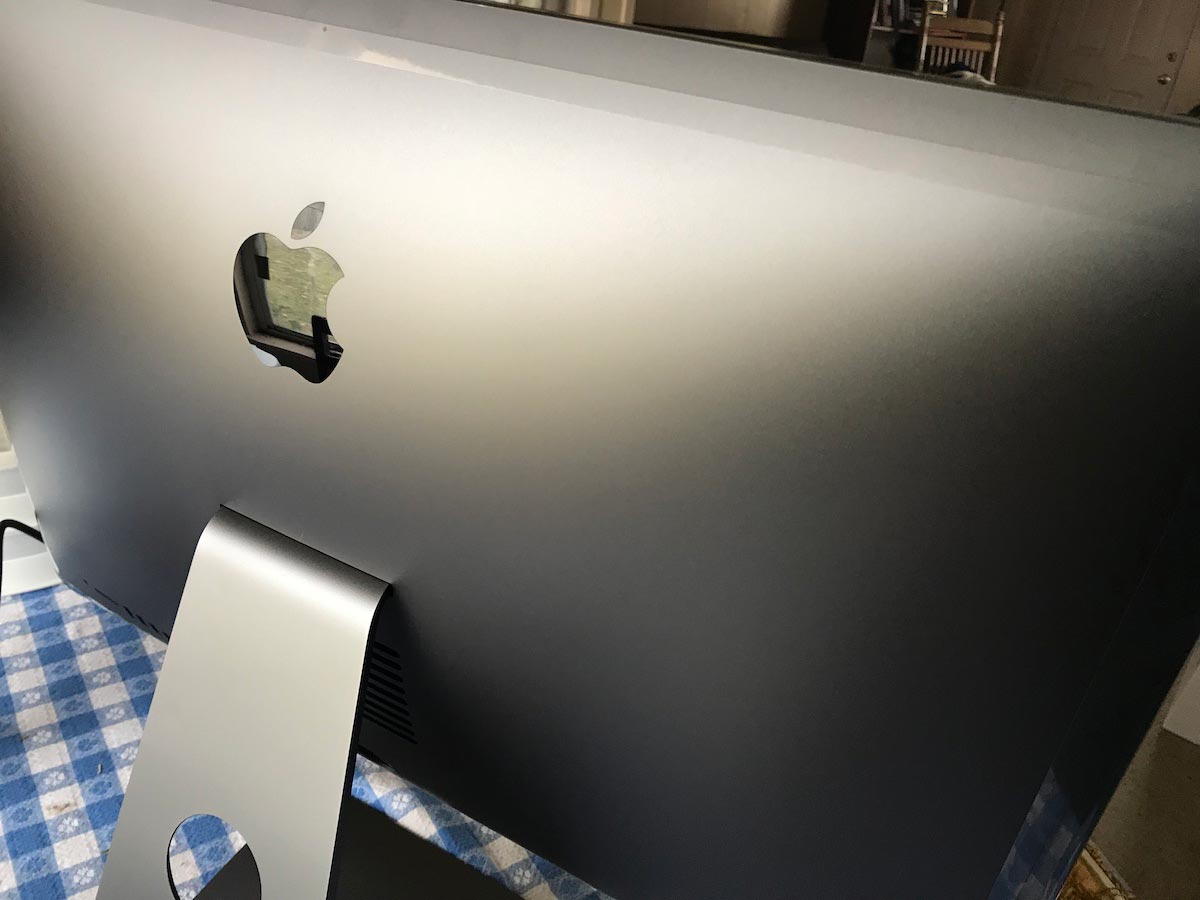 Folks seem to forget what we paid for those 4 years ago. And if you could spec a top end late 2013 MP to match the cores, RAM, etc of a top end 2017 iMP, the MP would still be more expensive based on Apple’s pricing scheme for it, and considering you have to purchase a monitor or it’s simply not usable.

All my media and Libraries are on a Promise Pegasus 16 TB RAID 5, with Thunderbolt 2 connections. I will simply disconnect it from the old Mac Pro and reconnect it to the new iMac Pro. All of the following test were run strictly off of this RAID for a more real world performance test.

I am keeping my Thunderbolt Display as a secondary for the new iMac Pro, but won’t connect it up while these tests are run. I want the two systems to be as evenly matched as is reasonable.

Every test uses the same 4 R3D clips from various RED cameras, downloaded from the RED web site. None of these has any audio. I feel this will give a good idea of the performance differences, and can easily be extrapolated out to other codecs by experienced users.

A final note, I did a cold boot of each Mac to do these tests, so that there was no other tasks running from other apps from my regular work day. I also ran each test three times and used the average of those times. Times are shown as minutes:seconds.fraction of second.

My first test was for ingesting media. I copied in 4 clips of .R3D Red cinema files, copied to the Library, consisting of 4K, 5K and 8K clips. The image below shows more detail. All together they totaled 5.08GB in size.

I timed how long it took to convert all of that into to proxies, in the Browser after import. Again, the iMP is proving to be a huge time saver with these sorts of tasks.

Then I converted it all into Optimized media, in the Browser after import. The iMP was about 5:18 faster!

I then deleted all Optimized and Proxy media for the rest of the tests.

Next I placed all of the clips into a Project timeline to manually render. The 4 clips I used created a timeline 1:07:07 in duration.

On the iMP in the Project Timeilne, the 8K clip had some jitter during playback, but all the other clips played smooth as silk. On the MP the 5K also stuttered just sightly, but it was not so bad you couldn’t edit with it. The 8K on the MP was so jittery it was impossible to deal with. Rendering made it play smoothly on the iMP and with slight jitter on the MP.

I tested general playback performance and timeline rendering on a 4 angled Multicam clip in a Timeline using the 4 RED clips natively, 36:08 duration. Yes, I had to fake the multicam, but performance will be reflected honestly even so. I duplicated the shorter clips to make each angle as close to the same length as the longest as was reasonable.

On the MP playback was so jittery both during the edit and simply playing back after the edit, it was impossible to work with the native files. Proxy files would be the only way to realistically edit this multicam.

Playback was quit a bit better on the iMP, but still choppy. Borderline enough to edit, with patience. Out of curiosity, I removed the 8K clip from the multicam, and playback for editing was much smoother. Still a slight jitter, but smooth enough to actually edit on. Either way, rendering on the iMP was amazingly faster. 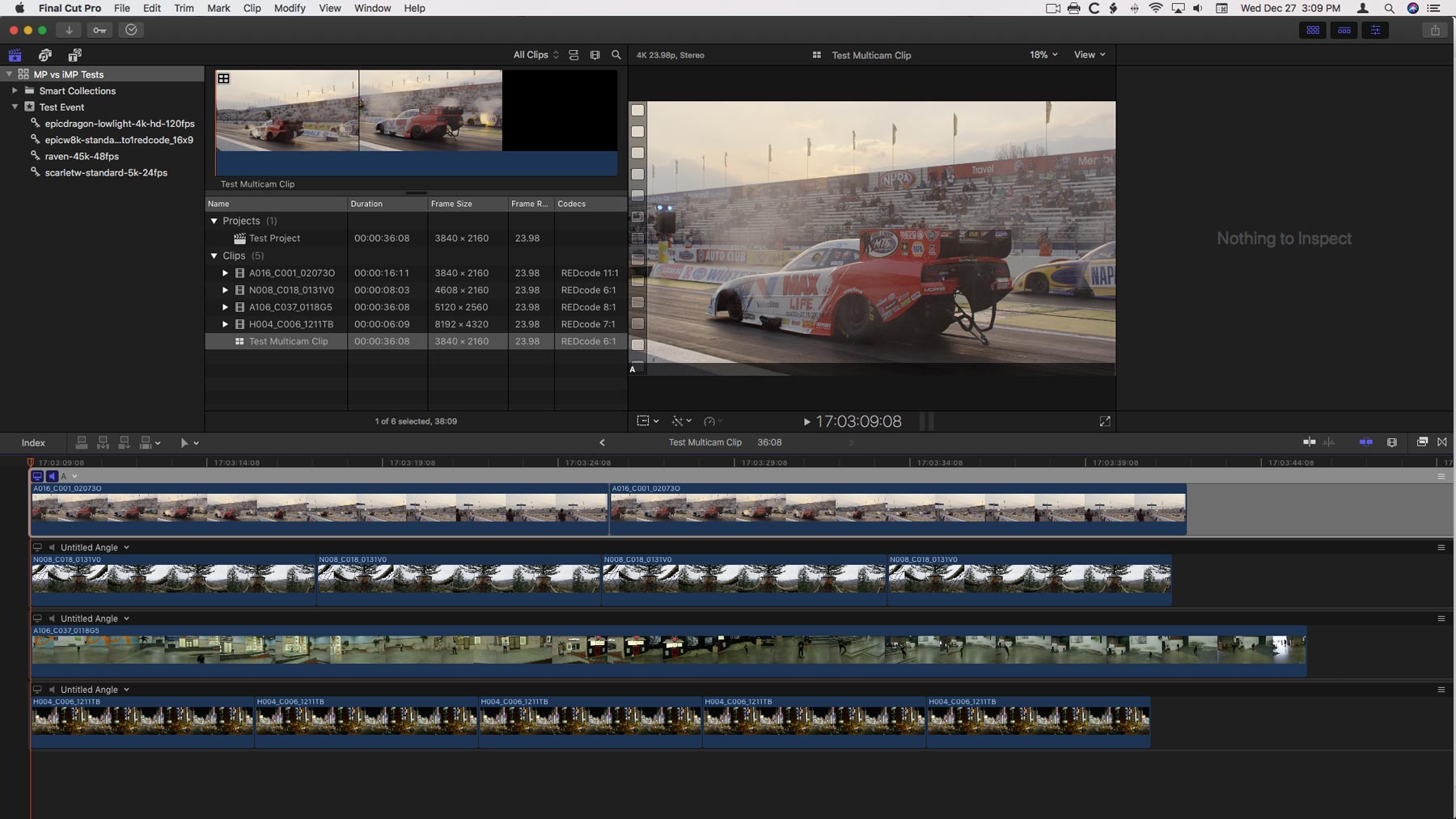 The MXF exported file was encoded to a 1080 HD 59.96fps file using a preset I created for my weekly broadcast deliveries. Note that I deleted all render files before exporting. And yes, the iMP is so much faster it ain’t funny.

Finally I ran the BruceX test, which you can find here on the forums. And as expected the iMP pretty much smoked the 2013 MP by 9.91 seconds.

I export a specific TV show (amongst others) weekly. It takes 1 full hour and change to export an H.264 preview copy and upload it to a GoogleDrive. I can set my watch by it. Doing the same on the iMac Pro took only 28 minutes.

I ran two Motion tests. One is just an emitter, the other is an actual 1:30 graphic heavy commercial spot. This gives me a good test, as I have to update seminar location & dates in one text panel, then export this once or twice every week for actual broadcast delivery.

The first test is possible with the help of our forum moderator Karsten Schuter, who’s pretty good with Motion. I used his 10 seconds long Motion project which contains a particle emitter with no external media at all, and LOTS of particles. This is pretty basic, but it make the point.

The second test as I said before is from my actual weekly television broadcast work. A full minute and a half TV spot, graphics intensive, no particle emitters, lots of text. I was a bit disappointed in this test’s H.264 export, not sure what to say here.

I’m finding some Motion projects are faster and some are slower to export H.264 on the new iMac Pro. Playback performance seems the same on both Macs, I did not find any differences there at all, but expected some improvement.

Motion obviously has not been optimized to take full advantage of the new iMac Pro hardware, which is a shame, as it has such great potential. AE on any hardware is slow as molasses. Motion is becoming a viable alternative for the work it can do. Why isn’t it taking full advantage of our hardware and being more consistent?

I would hope the next bug patch update (5.4.1) will give us some extremely vital improvements in playback and export for Motion. One would hope Apple is paying attention AND takes action in this direction 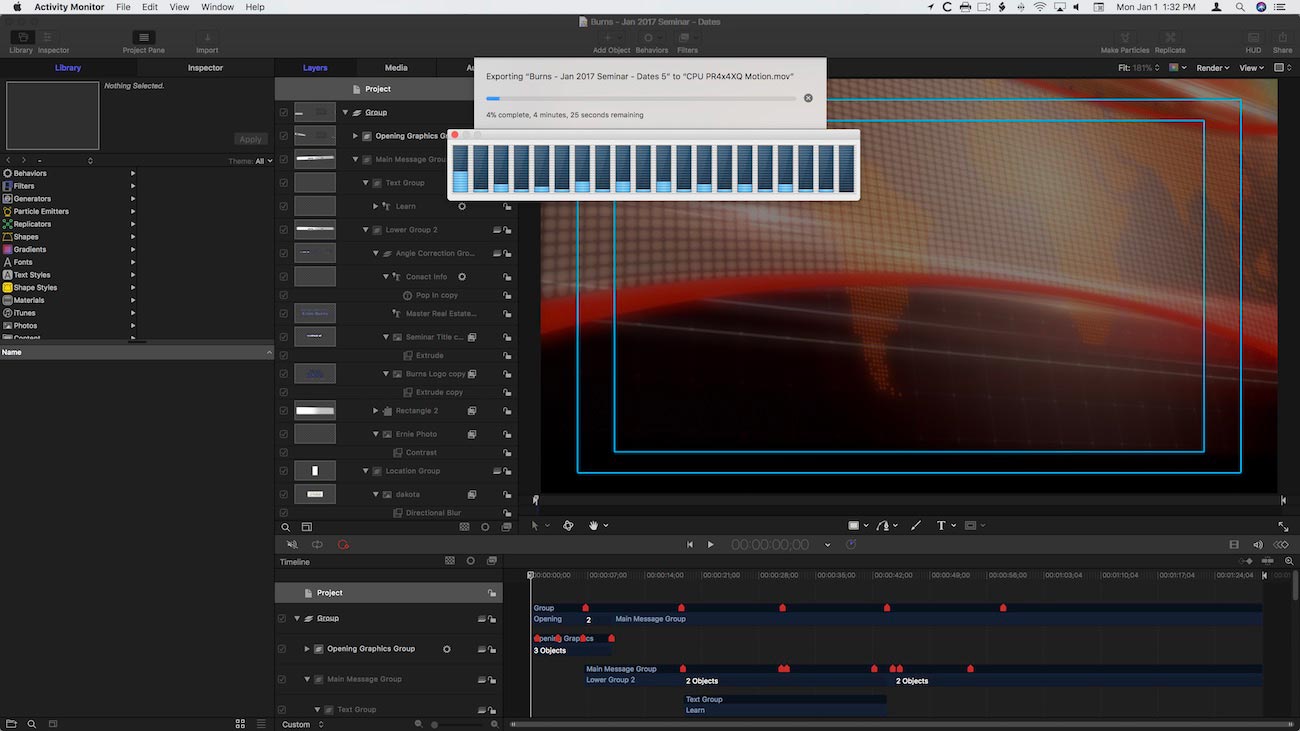 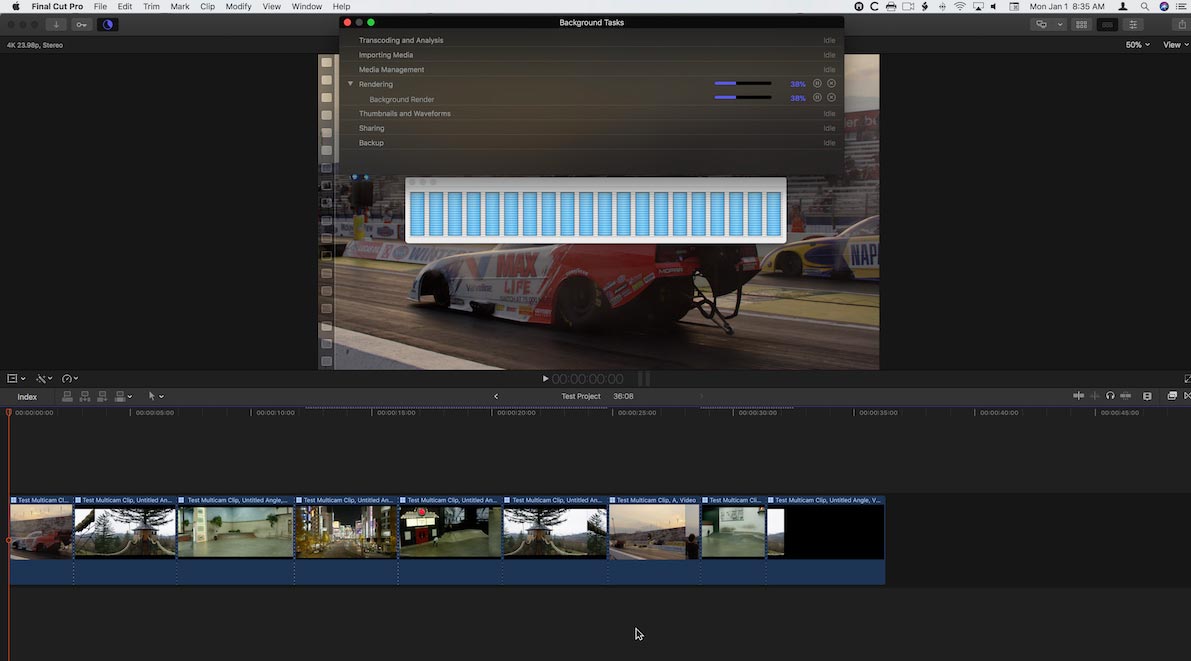 To test Compressor I took a 30 minute infomercial that I edit weekly in 1080HD, exported as ProRes 422, brought it to Compressor and encoded it as MXF for broadcast and as H.264 for the web, in the same batch.

Again, this is a real workflow for a real show I edit weekly, so this specific result tells me a lot about how much better my life will be after upgrading to the iMac Pro. I actually spend as much, if not more time waiting on exports as I do editing. This test result just made my day.

There are some significant differences between the CPUs and GPUs on these two Macs. The Mac Pro had an Intel Xeon E5 processor, while the iMac Pro has the newer Intel Xeon W processor. The “W” at the same clock speed and core numbers has huge advantages. It runs much faster RAM (2666MHz vs MP’s 1866MHz RAM), has faster and larger internal buffers, faster i/o and has a ton of technology in it, including processing tweaked for VR media development. Not to mention it over clocks quite a bit faster.

The Mac Pro had dual D700 GPUs which were nice at the time. But the newer Vega 64 GPU has huge advantages, also. The D700 had 6 GB of “GDDR5” VRAM. The GDDR5 is now out of date because it can’t be supported on the GPU chip very well, is larger and runs hotter, with only 3.5 teraflops performance. Not to mention its max resolution is lower than that of the Vega 64.

The Vega 64 uses HBM2 VRAM which is smaller, cooler, much faster, and easily integrated onto the GPU chip design. Direct connections make it much faster and more efficient. Smaller, faster, lower heat generation, the HBM2 VRAM goes a long way to helping the VEGA 64 be a very nice GPU. Not to mention the Vega 64 does 11 teraflops in single precision, and 22 in half precision. That’s a bit beyond the D700’s 3.5 (7 teraflops between the two D700’s installed).

From what we’ve seen on the OWC tear-down video, the SSDs are installed in pairs using a RAID configuration, which increases possible data throughput. Plus the sophisticated cooling system shows how Apple has achieved near total silence with the iMac Pro.

Well, the iMac Pro is a beastie, and a beautiful one at that. I love the elegant look of the late 2013 Mac Pro very much. But the space grey of the iMac Pro is really nice on my very nice desk. As you can see from the above numbers, the iMac Pro is Apple’s new king of media production for us in the industry.

A quick note about the 2017 iMac Pro, it is a beautiful machine visually. The screen is really bright and sharp, about the best image I’ve seen on a computer. The keyboard is fantastic. I have read a lot of reviews saying it lays too flat, but I don’t find that at all. I am a very proficient typist, and I am now typing faster and more accurately on this new wireless keyboard than ever. During the most intensive exports, the vent on the back had a good bit of heat pouring out of it, but it was dead quiet.

Most importantly for me, personally, if my render and export times are cut this much, 2018 is going to be a very nice year for my editing work. 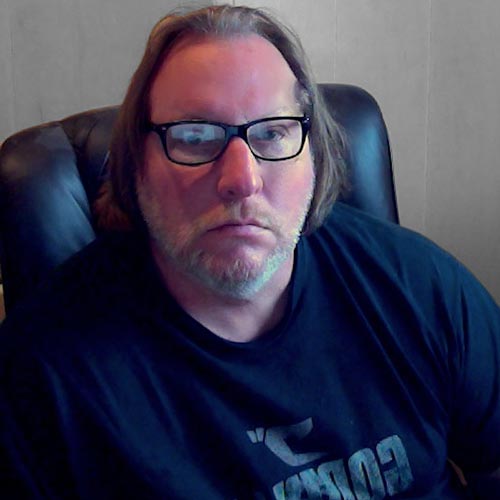 Ben Balser is a freelance producer and post-production specialist in the broadcast field, as well as an Apple Certified Master Trainer. He has used Final Cut Pro since its initial release over a decade ago. He also runs the www.finalcutprox.guru web site offering free resources for Apple pro app users.