The Rise and Fall of the Cylindrical Mac Pro

It is over 1200 days since Apple launched the 'Can't innovate anymore my ass' Mac Pro. Over the last 24 hours, there has been widespread reporting of Apple's decision to end the life of the cylinder and reinvent the Mac Pro. The bad news is the new model won't be available this year.

December 2013 seems a long time ago, but that's when we first got our hands on the new cylindrical Mac Pro. It was and still is fast, but the lack of upgrades over the years has been awkward for Apple. Now we know why the development didn't go any further.

Modern video applications rely heavily on the graphics processing unit to do the heavy pixel shifting. The two AMD 700s in the Mac Pro generated a lot of heat. That was fine with Apple software as it used the OS to regulate the work done on the cards and thus the heat. Not so clever for Adobe who talked directly to the cards (bypassing the heat control) and ended up burning them out - The movie Deadpool got through 10 of them apparently.

Putting beefier GPUs in was going to be a problem from day 1.

In a rather un-Apple move, this week a group of journalists were invited in to an engineering building in Cupertino to hear about Apple's plans for a new Mac Pro and go over the reasons why the old cylinder became a problem. For Apple to look back and even more peculiarly look forward to give us a glimpse of the hardware roadmap, it was obvious they were trying to halt the tide of users flowing away from the platform.

Six writers attended, but we think the three articles below give the best coverage.

Apple pushes the reset button on the Mac Pro
The Mac Pro is getting a major do-over
The Mac Pro lives.

From Daring Fireball's excellent report of the event:

Craig Federighi: I think we designed ourselves into a bit of a thermal corner, if you will. We designed a system with the kind of GPUs that at the time we thought we needed, and that we thought we could well serve with a two GPU architecture. That was the thermal limit we needed, or the thermal capacity we needed. But workloads didn’t materialize to fit that as broadly as we hoped.

Being able to put larger single GPUs required a different system architecture and more thermal capacity than that system was designed to accommodate. So it became fairly difficult to adjust. At the same time, so many of our customers were moving to iMac that we saw a path to address many, many more of those that were finding themselves limited by a Mac Pro through next generation iMac. And really put a lot of our energy behind that. 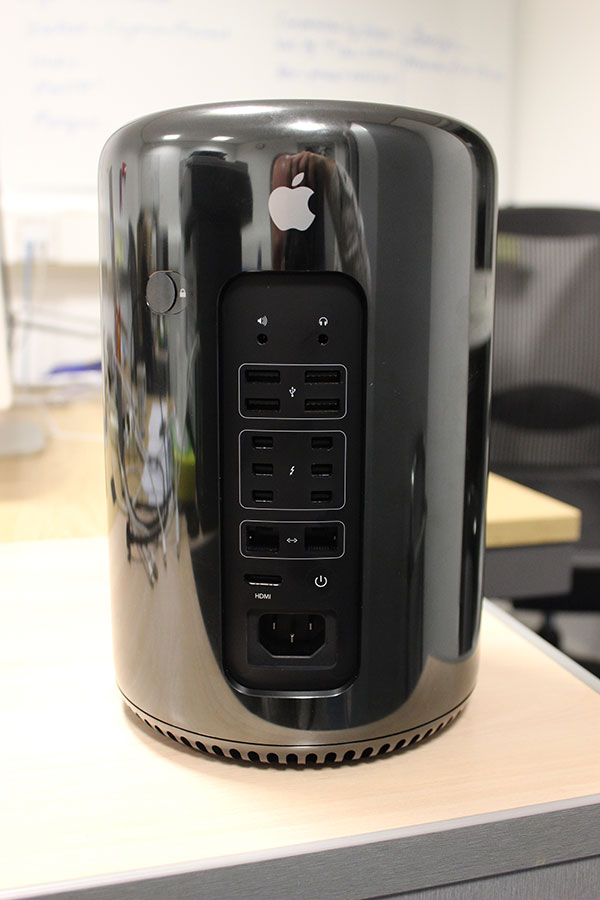 So no updates to the cylindrical trashcan. Wrong. At the meeting Apple did announce upgrades to the Mac Pro, possibly the last before its retirement. For $2,999 you will now get a 6-core Intel Xeon processor, dual AMD FirePro D500 GPUs and 16GB of memory, and for $3,999, you will now get an 8-core processor and dual D700 GPUs. Ironic timing to announce an update whilst announcing the future EOL of the product at the same time.

So what about the future? Is it the return of the cheese grater?

Phil Schiller: With regards to the Mac Pro, we are in the process of what we call “completely rethinking the Mac Pro”. We’re working on it. We have a team working hard on it right now, and we want to architect it so that we can keep it fresh with regular improvements, and we’re committed to making it our highest-end, high-throughput desktop system, designed for our demanding pro customers.

As part of doing a new Mac Pro — it is, by definition, a modular system — we will be doing a pro display as well. Now you won’t see any of those products this year; we’re in the process of that. We think it’s really important to create something great for our pro customers who want a Mac Pro modular system, and that’ll take longer than this year to do.

The announcement of a pro display was a shock, a complete 180 from its stance back in October when it was showing the LG UltraFine displays at the launch of the new MacBook Pros.

We also know that Apple has filed a patent for a combined keyboard and Touch bar. This would make a perfect addition to the above. Phil Schiller also mentioned that a touchscreen machine was not on the cards.

So where does this leave us editors? An future update to the iMac was announced. We would expect Kaby Lake processors and USBC ports. The current generation is an amazing machine and handles many large editing jobs, even in 4K. The new model will be even faster and we will be first to order one when it is announced.

If you want more heavy lifting, then you will have to wait until next year as the new 'upgradable' Mac Pro won't be out this side of Christmas, but hopefully we will have it before Christmas 2018.

Also we have to mention that Final Cut Pro X got a mention, and it is not the first time we have heard publicly from Apple about their commitment to the pro Apps;

Phil Schiller; “I just want to reiterate our strong commitment there, as well. Both with Final Cut Pro X and Logic Pro X, there are teams on those software products that are completely dedicated to delivering great pro software to our customers. No foot off the gas there.”

It is going to be an interesting year.