When trying to disto
Tom Wolsky

Can you recommend so
Larrie

We welcome Einar Johnson from Pixel Bokeh Productions who very kindly let us publish his story on how his company edited a highlight reel during the course of a corporate conference. Of course, FCPX was one of the stars!

Recently we completed a project for Punch Drunk to create a sizzle reel for a three day corporate event for AEGIS.

This is an annual event they call EPIC. The event took place at a hotel in downtown Seattle and started on a Monday morning with the final deliverable having to be client approved by 5PM on Wednesday to be played at a finale later that evening.

The goal was to create a 4 minute plus sizzle reel that “captured the heart, emotion, and energy of the event”. Due to the celebrity status of the speakers, and the element of surprise the client wanted to maintain for attendees, we would only have the initials of the speakers to work with before hand and know what they spoke about once they were done on stage.

Setting up Edit Stations and RAIDS

Turning a hotel suite into a two station editing setup takes a bit of know how. (More info here -Editor) Best to bring your own foldable tables and client monitor. The fancy LG TV in the room had some auto-dimming feature that you couldn’t override with the controller. Thankfully we brought out own 42” monitor for the clients to review the edits on. Setup and onsite testing started on Sunday morning. 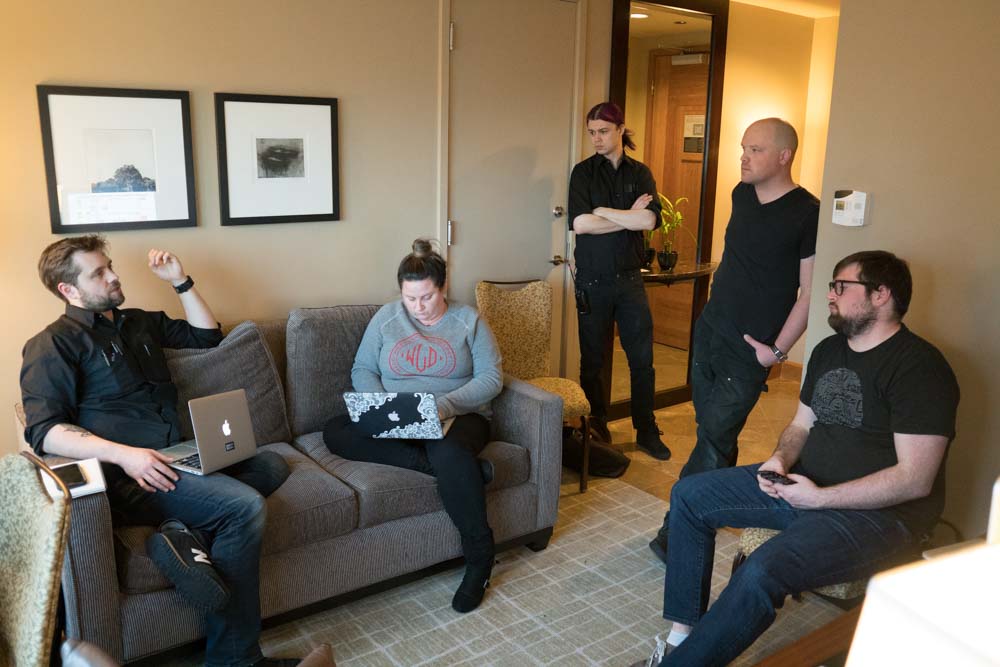 We decided to go with two iMac edit stations. The first would be used for ingesting material and making string outs (EDIT B). The second would be for final assembly (EDIT A). Both stations were equipped with the OWC Drive Dock. These docks were mainly used to offload the SSD’s from the control room. We also set up a gigabit ethernet network that allowed for moving data back and forth.

To create the sizzle reel we would be using footage from a variety of sources. The Punch Drunk crew was taking care of filming the speakers in the auditorium with six Sony EX-1 cameras which were going to BlackMagic decks recording in 422LT at 720P. A dedicated scribe was in the control room and taking notes as the speakers did their presentations to provide timecode and references to interesting talking points or crowd reactions for us to review for the sizzle edit. There would also be material coming in from a pair of C300’s and an OSMO X5 for capturing B-Roll footage in-between the speakers. Some events were also held offsite which meant the B-Roll team would be roving a bit. 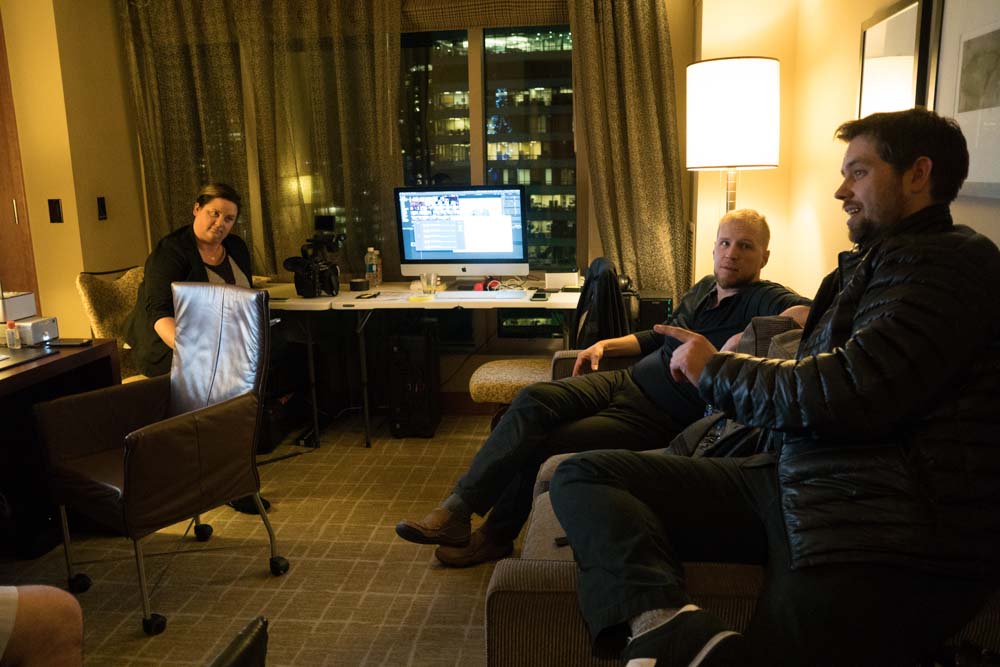 The challenge for us was to be able to ingest all of this material hourly, review and keyword it, and then start working with it on the timeline for the client to review each day, all while having no certainty as to who it was that would be speaking beforehand. This is where a lot of planning and workflow processing took place prior to the event. The OWC docks worked great to offload the SSDs.

For ingesting the footage we used Hedge for Mac. This is a fantastic piece of software that allows you to offload several cards at once to multiple locations and it will do a checksum at the end to let you know that all of the data is there safely. And boy is it fast!

Since there was a limited number of SSD’s for the Hyperdecks, we had to offload the footage and then send the drives back down to the control room so they could be wiped for the following speakers later in the day. Knowing that Hedge was verifying the offloads was an added sense of security. 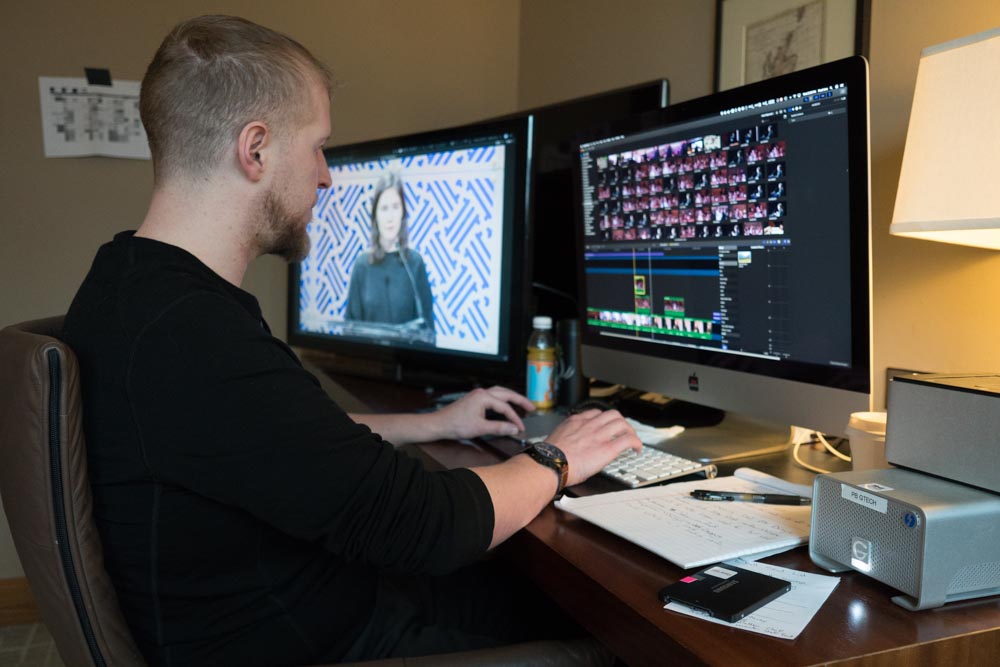 All of the material was being backed up in three locations. We had two copies of all the material in the edit suite, while a third went to another room where it was offloaded for later use in a long form, multi-disc DVD series for the client to use later on.

For the sizzle reel, the footage was offloaded to a 16TB RAID from OWC and the redundant backup was to a 16TB Synology using Chronosync to ensure the duplication was perfect. We had originally planned on using a RAID from G-Tech, but found the one we ordered had a failed drive right out of the box. This was a bit of a surprise as we’ve had good luck with G-Tech in the past. However one thing we really liked with the OWC drive was that it came pretested with a guarantee of working.

Using Events and keywords in FCPX

FCPX is the perfect NLE for editing content that has multiple speakers across multiple days. The metadata, keywording, and organizing capabilities are pretty much unparalleled these days.

Each speaker’s 1-2 hour delivery was put into a separate event, and a common series of keywords was used along with favoriting them. Using the notes provided from the reviewer we were able to quickly go through the material and create string outs. The string outs were then rendered out as 422 at 720 and transferred via ethernet to Edit A. The B-Roll from the C300’s was kept at 422HQ / 1920×1080 for the sake of being able to reframe if desired. 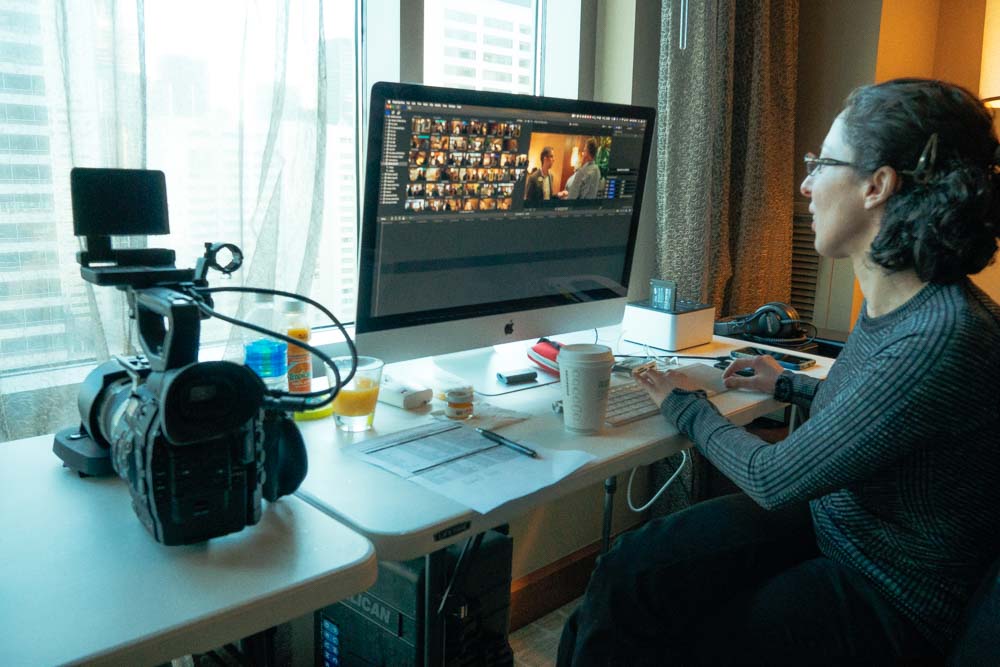 One of the challenges to this project is that due to the celebrity status of some of the speakers, we were given only their initials before hand. The concept is that it is a surprise to everyone in the lecture hall as to who they are going to be hearing from that day. It also meant we had no exact idea as to what topic they’d be talking about until after they were done on stage.

To adapt to this, we simply blocked out the timeline so we knew we wouldn’t leave out any of the speakers. The lower 3rds and titles were designed by Dorian Heller of Heller Studios. These were transferred over from his laptop via thumb drive.

The ability to organize so much material so quickly, find a snippet that you remember seeing or hearing as you scrub the material at 2x or 4x speed (yes, we can understand chipmunk) is just one of the many reasons FCPX was the perfect tool for this job. If you’ve ever been in a position where several client producers are demanding to see this or that clip and discussing how things should go, you know an NLE is worth it’s weight in gold if it can function at the speed of thought. This wasn’t heavy source material, but still it was amazing to have FCPX just jump right to it.

On the last day of editing, things were of course getting down to the wire. The client likes to do a surprise ending which only a handful of people know what it is. That of course means that we were kept in the dark about what was coming until about an hour before final delivery of the project to the client. Having no idea what or who the last speaker was or where that material might fit into the sizzle reel left a bit of uncertainty, but we built in blocks on the project timeline as to where the material could go.

We did all of the color, title work, and dialogue/music cue mixing late in the evening on Tuesday night so that the overall edit was 80% ready to go on the morning of Wednesday, the last day.

Once the final presentation/performance was done, the SSD’s and CF cards were rushed to the edit suite. We quickly reviewed the material and in about an hour and a half were able to figure out where the material would be slotted in to the final edit. Chapter markers were used to help jump to various sections that we’d marked with emotional pivot points.

The client showed up about 20 minutes early for the final review, but we were pretty much done with the final pieces of footage. They provided a final punch list of about 12 edits which we quickly made and then started the export of the project. The final export for the client’s evening event went out as 422 720P. I’d have liked to have exported at 422 HQ, however the majority of media came from the six Sony cams that were 422LT, so going higher in codec quality didn’t seem necessary. The export for the online deliverable for use on the client’s website was done at 422HQ and converted using Sorenson’s Squeeze.

From there it was loaded up to a MacBook Pro laptop and reviewed for final playback. Word at the end of the night came back from the client that they were “thrilled and loved it.” That was good enough for us. 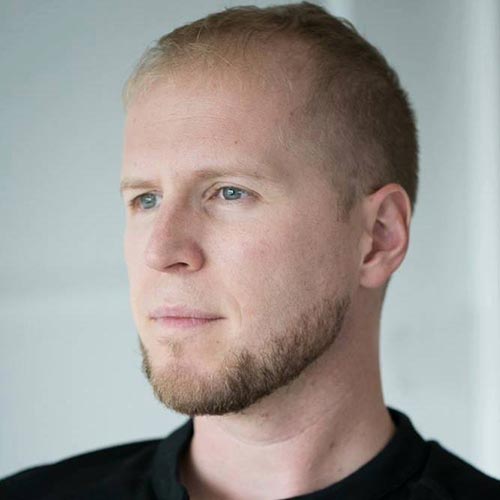 Einar’s career in professional video production began in the 90’s shooting and editing for local news channels.
In 2000 he moved to the UK and continued his career in Glasgow and London, working to create promotional videos for one of the worlds largest technology institutes with 56 locations globally.
In 2011 he co-founded Pixel Bokeh Productions with his wife Antonella, and returned back to the Seattle area.
Tweet