Have Mercy on Me: FCPX Workflows for Breakneck Music Video Deadlines

We love Final Cut Pro X user stories here on FCP.co, especially when they feature a specific workflow. In this article, Brian King runs through his process and techniques for editing a music video on FCPX.

I love being able to obsess over a music video. There’s a lot of luxury behind getting an advance of a song, rolling ideas over and taking the time to execute in a way that’s precise and methodical. That kind of luxury isn’t always part of the deal, though. 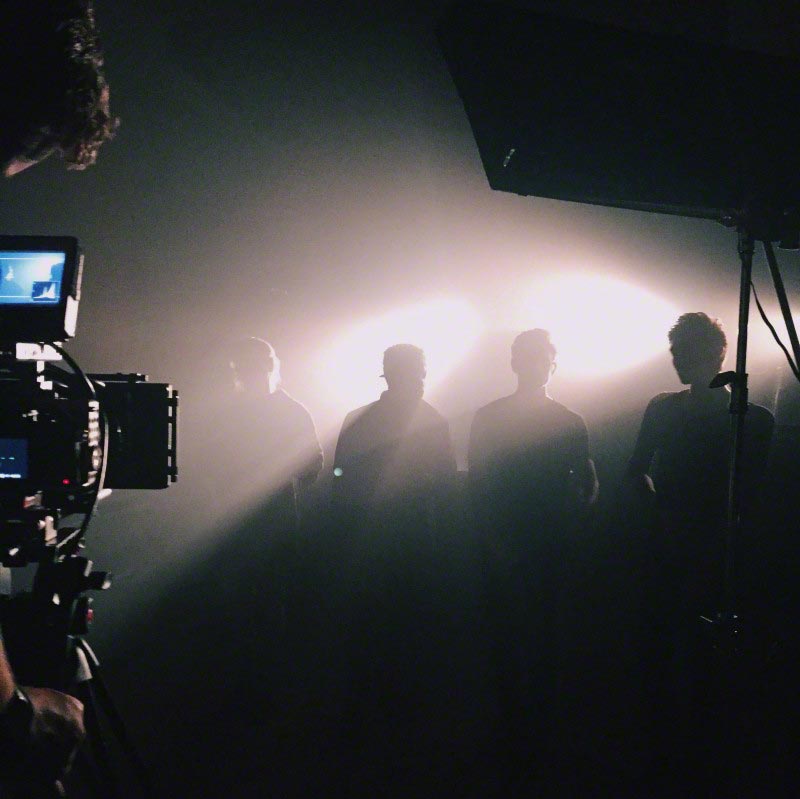 Cut to: Monday (three days ago). We had five hours in the studio to knock out a performance-based music video with Island Records’ Citizen Føur. Following that shoot, I had 24 hours to provide Version 1 for review, and another half-day to make client-requested changes in time for a couple hours of color.

Despite the rush, I had to make sure to get the best performance takes, as there was almost no b-roll to hide behind. This is a breakdown of the workflow I used to make that happen. 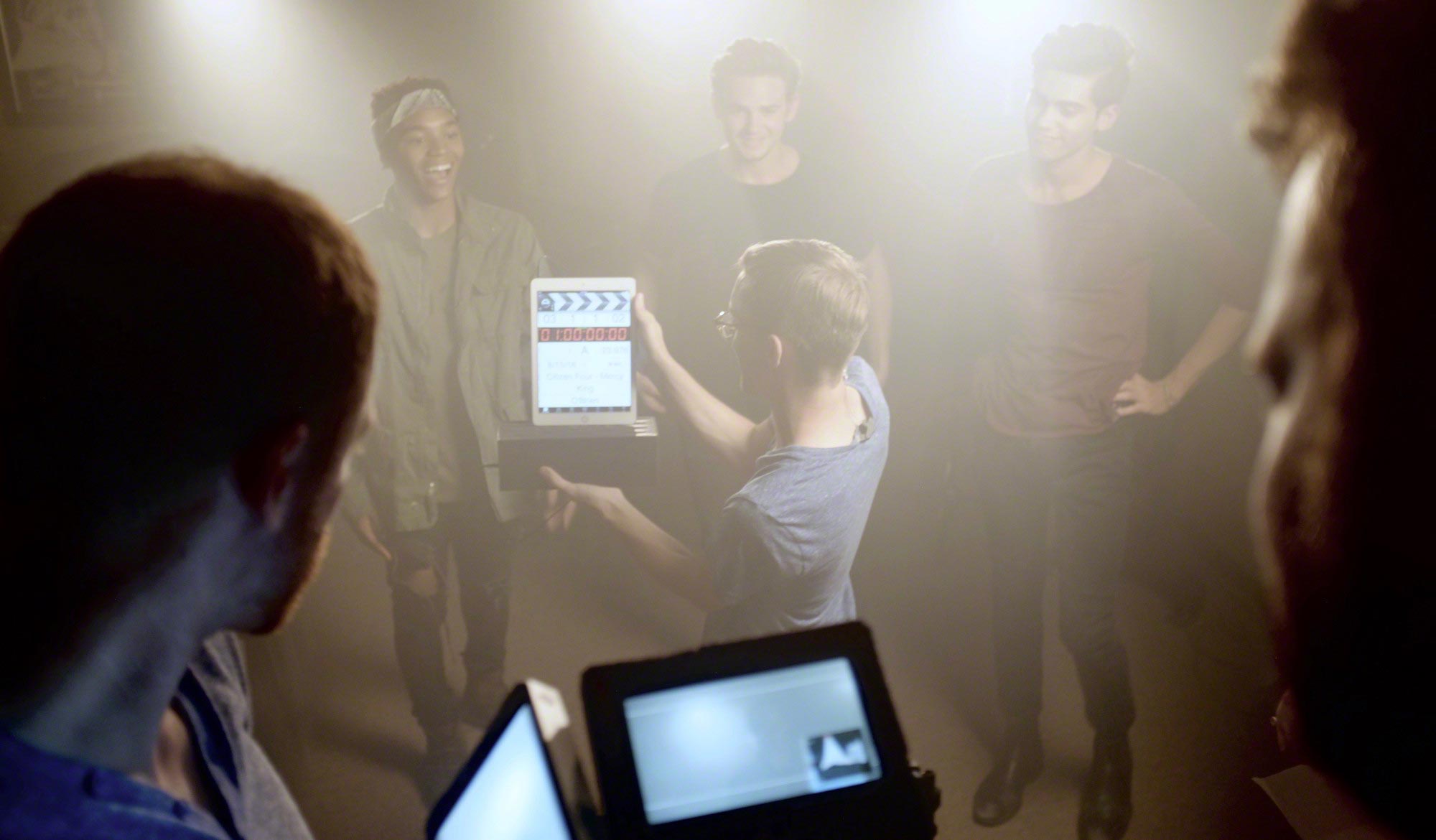 Setting up the first shot for “Mercy”. That’s me on the left, and DoP Sean O’Brien on the right.

In a perfect world, we’d be using timecode jam-synced from a playback device. There’d probably be an operator sitting behind a laptop with some big speakers. In real-life, we were shooting on cameras without timecode-in (Sony’s A7S II with Canon Cine lenses), and had gotten our final version of the song about two hours before cameras rolled.

There is something espcially painful about sitting on-set while a PA tries to finger-scrub to the desired section of a song in iTunes. Naming each section of the song and then marking them up in MovieSlate for iOS eliminates this. 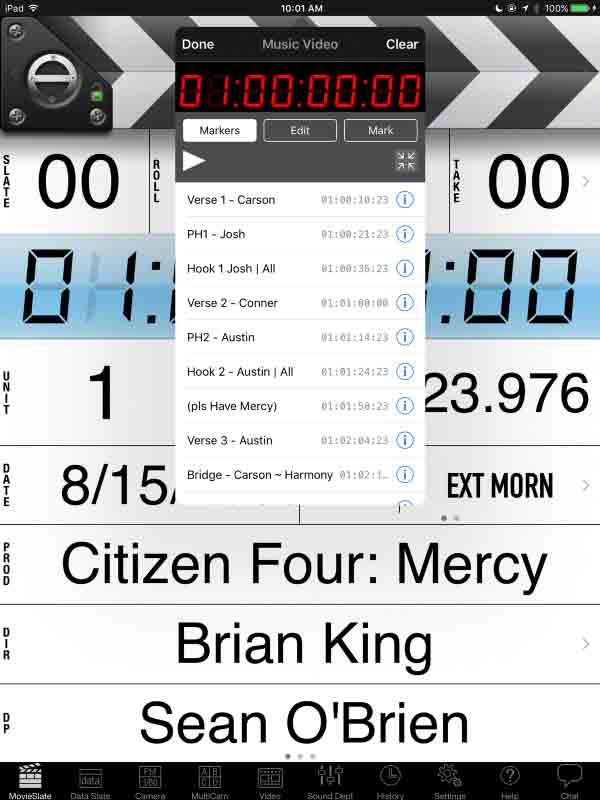 Rolling with MovieSlate gave me a flash of the song’s time-stamp on each slate. Our PA also announced which part of the song was cued on top of each take, allowing me to name clips inside Final Cut by only listening to the first few seconds of each one. Runthroughs of the song with the whole gang were only slated on the top of each take. FCPX’s keyword regions were the MVP here.

Logging music video footage is the least glamorous part of the job, but you get the benefit of feeling like a savant when you’re on the 25th take, playing the song at 8x speed and not touching your mouse or trackpad. The temptation to skip this part of the process is strong, but editing time “lost” by not building a timeline right away gets made up quickly after the footage is organized.

The short sections of song that we slated on set are easy. Name it whatever the person with the slate called it, the shot type, and who’s in it. Check.

For the full runthroughs, keyword ranges are your best friend. Find the top of the chorus on a clip and mark it in (I). Mash play forward (L) a few times to fast-forward until you hear the end of the chorus. Mark it out (O), and then apply your keyword (⌘K or ⌃number). Repeat this for every single section of the song in every single take, marking favorites (F) on sections that stand out. 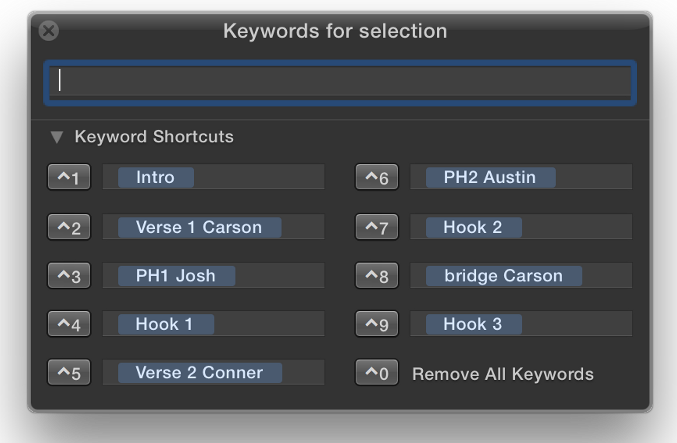 The (⌃number) shortcut is a good one. In your keyword pane (⌘K to hide and reveal), you get to set keyboard shortcuts for oft-used keywords. When you start your project, name each one of these guys for the different sections of your song, preferably in order.

Here, I have control+1 set for the intro, control+2 set for the first verse, and so on. With this in place and embedded into your brain, you‘ll be able to quickly mark your keyword ranges without typing letters or even opening the keyword pane. Play back the clip, mark in and out, hit your shortcut, repeat.

The result of keyword ranges.

You’ll end up with each section of the song divided up. I numbered those sections in chronological order to make them easier to find in the Events browser, and added a couple more keywords for non-musical things like location atmosphere and the boys “vibing”, which is always something that comes up in revision notes.

With all of your axe-sharpening complete, it’s time to actually make a cut. Set up a new project and lay down the song as your primary storyline. With the help of magnetic timelines, you’ll be linking all of your clips to the song itself.

This saves you from potentially day-ruining sync issues. You might want to drop some markers (M) for different sections of the song or opportunities for particular cuts, but you can always do that later in the process.

The actual editing is the part you should already know how to do. Take the shot that looks best for the piece of the song you’re listening to, and drop it on top of the song. Find some alternate options and try those out. If nothing looks good, find one of those “vibing” shots and drop it in.

Repeat for three minutes and thirty seconds of song. Thanks to our handy keyword ranges, you’ll be able to easily find clips from each section of the song. If you did a good job naming your clips, you can always search your whole project or any keyword range for a specific shot or musician.

Sync is important. The last thing anybody wants is shoddy lip-sync during a music video. Viewers are willing to forget that the song playing was not actually recorded by the cameras’ microphones, but only if the editor makes damn sure nobody’s mouth is flapping around when it shouldn’t be.

Remember how we didn’t have the budget for a fancy slate, or cameras with timecode in? This is the part where you make up for that oversight with your raw musical and keyboard-mashing talent.

In the process of logging and editing the video, you’ll know the song ridiculously well, possibly better than the band itself. With a little bit of foot-tapping and singing along, you’ll be able to nail the timing on your preview clip and drop it onto the correct spot of the song. Remember your nudge keys (< and >) if you’re off by a few frames either way.

My favorite trick for music video sync is backtiming. Backtime allows you to drop a clip from the out point, stretching back over the section of the song that just played back. This is useful because it’s much easier to time things you just heard instead of things you’re about to hear. 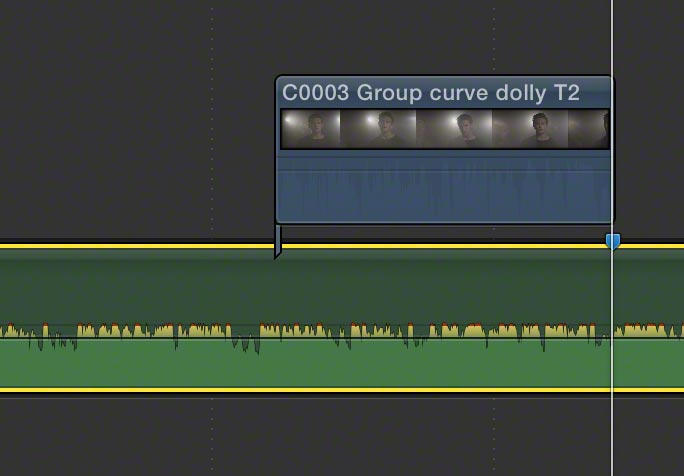 Backtiming. When I hit ⇧+Q, the clip dropped on the playhead from the OUT point.

This workflow is difficult to explain, but makes sense in process.

1) Listen to the section of the song you want to add a clip to. In this case, it’s the lyrics “I fall when I’m around you”.

2) In your preview pane, find those same lyrics in your reference audio. Mark out (O) after them, using the same timing. Rather than trying to hit exactly on the “ou” of “you”, use the rhythm of the song. It might be on the beat after a word. This is an intuition thing. Try dancing.

3) Backtime your clip to the timeline. Your playhead should still be where you left it, just after “around you”. Use shift with your “connect” shortcut (⇧+Q by default) to drop the clip at the out-point.

4) Trim the beginning of the clip, then play back and adjust your sync as needed.

This is what my timeline looked like after version 1. You can see all of the places where I auditioned clips and then disabled them (v) in favor of something else. Blue markers on the song are for sections of the music, and for some glitchy cut opportunities.

The secondary storylines (highlight clips, then ⌘+G) allow me to use transitions, and keep sections from the same shot linked to each other.

All of the disabled clips and buried clips in lower levels of the timeline are still there because they work to some capacity, but aren’t my first choices.

If a revision note asked me to replace the shot at a particular time, I’d be able to jump into the timeline and see exactly what my other options are. These alternate shots and clips were ultimately cleaned up for picture lock:

All client review was done via Frame.io, which allowed everybody involved to collaborate on notes that were pinned to the appropriate parts of the timeline. This saved us from the time-suck of messy email chains, and people who might not know how to deal with services like Dropbox. 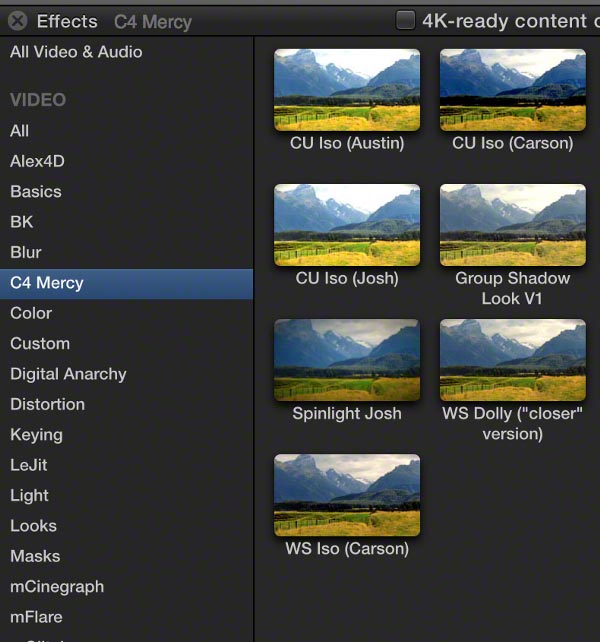 In the interest of a very fast color session, coloring was done directly in Final Cut, using effect presets I built for each shot setup. Those effects had to be modified a little bit on most of the clips, but the presets offered me an extremely solid starting point. In order to set up these presets, build out a shot with the effects and settings you want, and then use the “Save Effects Preset” on the bottom of the inspector window. It’s a big dumb button that’s strangely easy to overlook.

Despite knowing the release schedule ahead of time, it was strange for me to wake up this morning and see the video already launched and thousands of people sharing it. I still haven’t had time to put away all of the gear from the shoot. That’s a level of instant gratification that isn’t common for this profession, and I’m thrilled to have the tools to make that possible.

A big thanks goes out to the crew for keeping everything running smoothly & beautifully on the shoot day, and to Citizen Føur + Island Records for trusting us with these fantastic projects. It’s challenges like these that keep us sharp, and inspire us to improve.

Many thanks to Brian for this insight into editing a music video. You can find him on Twitter @bkbkbk or find out more on his website lucidpotato.com