Is FCPX really that
martinX

Eyeheight has just announced a compliance plugin for use within Final Cut Pro X. With a press release title like that, how could we not pay a visit to the Eyeheight stand at IBC this year?

With FCPX making more inroads to broadcast as its feature set expands, the outputting of a master that has to conform to a set of 'legal standards' becomes more important.

FCPX has a built in Broadcast Safe filter, but it is fairly clumsy. It might not allow whites over 100%, but it doesn't do a great job of keeping the highlight detail. Clouds in the sky are a good example, with the whites given a 'haircut' all the highlight detail will have gone, to be replaced by a pure white blob. (A side not here, our broadcast safe filter doesn't actually clip down to 100%.)

Proper legalisation of levels for compliance is a complex task and that's where Eyeheight have drawn on their past experience making hardware legalisers. This knowledge is going to be behind complianceSuiteFCX.

They have previously released a version of the Compliance Suite for FCP7 priced at £995 which has been successful, so moving onto FCPX and Motion seemed a logical progression.

'complianceSuiteFCX users can select from an extensive range of presets or work in custom mode which gives full access to 15 configurable parameters. Facility administrators can assign which built-in presets are available to users, create new presets or disable the custom option to ensure that users only use approved configurations.

An integral safe area generator provides an extensive range of broadcast safe area markers covering all the requirements for SD, HD and 2K, including 16:9 and 14:9 requirements in SD. Administrators can modify the set of markers available to users, add new custom markers or restrict access'

The plugin is in its very early stages although we should see a finished product in the next couple of months. Pricing will be key and talking to the guys on the stand, it is likely to be in the sub £500 range. We suggested $199 which might be a possibility if the numbers stack up.

The current system of copyright protection using a dongle may get replaced with a serial number licence. We hope so, as the industry has moved away from dongles and we think that most people want to download software and use it right away.

With the move towards file delivery of programmes for broadcasters, this plugin might prove to be an invaluable tool. A demo version for FCPX will be posted on the Eyeheight website soon.

Notch another one up on the FCPX tradeshow count. 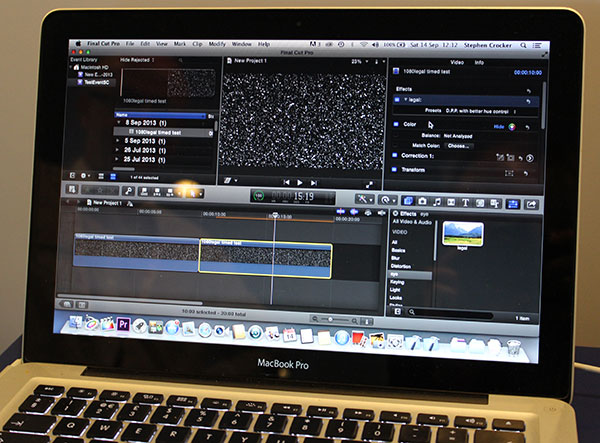