Two new plugins have been released that use the FxFactory plugin management system. Although they both do colour correction, they take a very different approach to how it's done.

Let us start with a plea to all plugin developers out there. No more colour correction plugins please! We have had hi colour, lo colour, fast colour, colour precision, colour everything and so on. It is not as if FCPX hasn't got any built in tools is it? Surely if you are that serious about grading, you are going to export to DaVinci Resolve anyway?

OK, enough of the rant and let's get on and look at the new plugins.

Hawaiki Color is a $49 plugin from the combined talents of plugin developers Simon Ubsdell of Tokyo Productions and Rob Mackintosh of Lawn Road. It has been made exclusively for Final Cut Pro X.

It differs from many of the colour correcting plugins out there by having the majority of the controls onscreen. They have taken the idea of onscreen colour wheels which was introduced by Yanobox Moods and added a lot more control. As you can see, when the plugin is in adjustment mode it looks like a full blown grading app. 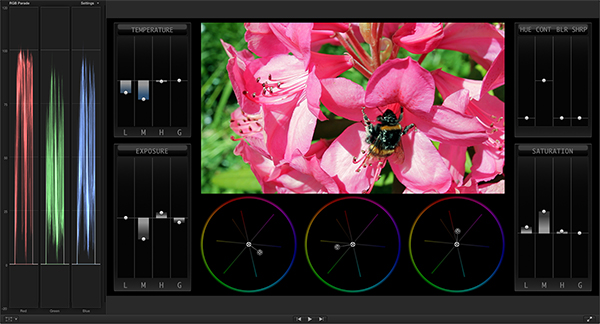 It all looks rather cool, but you have to toggle the display on and off, it doesn't disappear automatically when you render. This could be annoying if you have a lot of clips on the timeline that you want to grade.

The guys have produced a great tutorial that shows the plugin in action. We have to give them credit for building such an intricate onscreen GUI.

The second of the two plugins is Contrast from Nattress productions. The $49 pack consists of four plugins, Bleach Bypass; Detail Preserve Contrast; Hyper Contrast; and Luma and Saturation Contrast.

Bleach Bypass produces the high contrast film processing look of the same name. The result is a black and white image imposed over the color image. This effect increases contrast and graininess, while reducing saturation.

Detail Preserve Contrast divides the image into two regions: high detail and low (coarse) detail. Each region has its own contrast control. This filter can be used to create a greater separation between the subject and background.

Luma and Saturation Contrast enables you to increase or decrease the contrast levels of the luma and saturation independently. This filter is very useful when a simple contrast causes the saturation levels to bloom too much.