A year in the life of Final Cut Pro X and beyond...

This week on the 21st of June, Final Cut Pro X wil be one year old. We take a look back at that eventful year and take a look forward to the next 12 months of FCPX's life.

We first got news of the impending birth of Final Cut Pro X at the hastily rearranged Los Angeles Final Cut Pro User Group meeting on April 12th during NAB week in Las Vegas. A room full of eager editors and post production professionals witnessed a slick presentation of FCPX from Randy Ubillos, the designer of FCP7 and FCPX. Lots of whooping and cheering accompanied announcements such as 64bit, colorsync, magnetic timeline and of course the price, $299.

One of the problems that brought Apple in for a lot of criticism originated from that meeting. They displayed two timelines showing the same edit, one in FCP7 and a very tidier timeline in FCPX. From this it was assumed that older FCP7 projects could be opened in FCPX and we now know that that's not directly possible. The two programs are completely different, we appreciate they don't share a line of code but imagine a new PhotoShop from Adobe not being able to open old files.

Talking of competitors, Avid got into the news a couple of days earlier by offering a cheeky 60% off Media Composer to switchers, an interesting move that was to be repeated again.

That night's presentation spawned a multitude of guesswork on blogs, some pro articles that are actually funny to read back now and of course at least one Hitler parody video. Closer to the release date we got a few pirated screengrabs posted, then removed and of course Larry Jordan's famous line about FCPX, which looking back wasn't far off the truth.

We must mention here that the day before the release of FCPX, we launched our community page and forum which has grown to be one of the most successful Final Cut Pro based forums on the internet. We thank everybody who has taken part and look forward everybody's posts in the future.

WWDC 2011 went by without any news until on June 21st Final Cut Pro X was available to download from the Mac App store. Gone were the many DVD's and heavy manuals of past versions, gone too were DVD Studio Pro, Color, Soundtrack Pro and a rather forgotten Final Cut Express.

Along with Final Cut Pro X priced at $299, Motion got a $49 facelift in the upgrade to version 5 and Compressor to version 4 for $49 as well. What was unexpected was the decision by Apple to stop selling FCP7 in stores and online, a move they were later to reverse by offering customers the chance to buy FCP7 by phone.

On the day of release, only a few companies had products for FCPX available. Ripple Training offered their first FCPX tutorial, Noise Industries announced their set of FxFactory plugins were now compatible and Automatic Duck's Pro Export allowed OMF and AAF export. We would later in the year find out that Automatic Duck's products were withdrawn as Wes Plate had been offered a job at Adobe. The products have since been reposted and are free to download.

Then followed a few months of official mourning for FCP7. Articles appeared such as "Who took the pro out of Final Cut Pro" and "FCPX should be called iMovie Pro." You know things are bad on the PR front when a network television show takes a swipe.

Although the Conan team had exaggerated the problem, (and overshot their coolness in the latest Premiere video) Final Cut Pro X was lacking features in many departments and this was a genuine problem. Blog writers, Tweeters and Facebookers jumped at any chance to kick an NLE when it was down, even editors who hadn't even used it ranted how much they hated it.

Apple responded quickly by releasing two documents which have since been taken down, 'Answers to your Final Cut Pro X questions' and 'The top 50 features in FCPX for Pros.' They also posted 4 videos on the main FCPX page comparing their NLE to Avid and Premiere, a marketing policy Apple doesn't do often. The videos are still there and have been joined by a fifth Multicam video.

Ignoring all the fuss, people were buying FCPX in their thousands, this led to a new FCPX ecosystem of tutorials, effects, peripherals and much more. It seemed like a day didn't go past without some product being upgraded for use with Final Cut Pro X.

The first of September saw FCP7 back on sale and a quietish IBC in Amsterdam for Apple but a busy one for Thunderbolt news. Then came September the 9th.

Apple had hit some of the critics head on with their first update. Along with the normal bug fixes and stability improvements, they added a list of new features.

They also announced that two of the most requested features were coming in early 2012, multicam editing and a broadcast output. This was only the second time that Apple had announced any roadmap details for Final Cut Pro.

Was the tide turning? No, but one thing that helped was the announcement in October of Xto7, a $49 application that would translate an FCPX timeline into a Final Cut Pro 7 one. It showed the editing community that translation between the two apps was possible even though Apple had said that because the two file formats were so different, conversion was extremely difficult.

Then came the release of 10.0.2 on the 16th of November. A few small bug fixes but it did prove that Apple were dedicated to regular updates.

It was the same old story towards Christmas and the New Year. Criticisms continued and the ecosystem kept growing. More plugins, more training, more thunderbolt peripherals and more importantly for Apple, more people were buying FCPX. The broadcast success stories started to emerge such as this one we published on The Next Bite.

Then on the 31st of January we were presented with the 10.03 update that offered Multicam Editing and a true Broadcast Output. 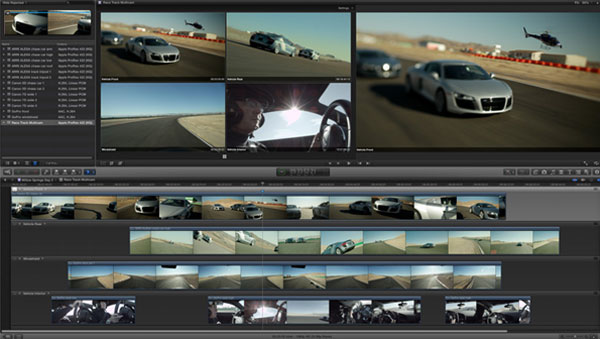 Slick and easy to use, the new Multicam editing in 10.0.3 made industry professionals think again about FCPX. By anybody's standards, this was the most elegant implementation of multicam editing on any NLE platform. The broadcast output was slightly different, although the feature had been implemented, it was in beta and the third party Thunderbolt & PCIe drivers needed improving.

Also included in FCPX was the keyer from Motion "Final Cut Pro X builds upon its robust, one-step chroma key with the addition of advanced controls including color sampling, edge adjustment and light wrap. You can tackle complex keying challenges right in Final Cut Pro X, without having to export to a motion graphics application, and view your results instantly with realtime playback."

Hard on the heels of the trio of updates was a new $9.99 7toX app from Intelligent Assistance. This allowed you to bring Final Cut Pro 7 projects into FCPX and priced at $9.99 it seemed a bit of a no brainer, if like us you have many drives full of old 6 & 7 projects.

"The lightweight application is simple to use, with drag-and-drop support and progress information. 7toX translates important metadata from your Final Cut Pro 7 Project — including bins, clips and sequences — to a new Event in Final Cut Pro X with the highest fidelity of any translation application for Final Cut Pro. In addition, the application provides clear, detailed reporting after every transfer."

Also Marquis announced X2Pro, a $99.99 app that converts and transfers FCPX projects so they will work with Pro Tools.

“We are excited about the introduction of X2Pro Audio Convert,” said Chris Steele, Product Manager of Marquis Broadcast. “It provides a smooth workflow between FCPX and Pro Tools, allowing users to take full advantage of the functionality of these world-class products now and in the future.”

Quietly in the background, it was found out that BlackMagic Design's DaVinci Resolve was also capable of translating projects between the two FCPs. It also provided a free replacement for Apple's EOL Color.

And so the familiar pattern of people still complaining and more tutorials, plugins and peripherals being launched continued for a couple of months. Again, a few FCPX broadcast success stories emerged such as the 2012 Iditarod Sled Dog Race.

In the week before the 2012 NAB show in Las Vegas (where a year ago this story started) Apple released the 10.0.4 update. A few tweaks for FCPX, but more for Motion 5.0.3 and Compressor 4.0.3. Shortly afterwards, AJA, Blackmagic Design and Matrox all updated their broadcast output drivers.

The very next day, Adobe showcased Premiere Pro CS6. As the product manager Al Mooney used to work for Apple, nobody was surprised that the once cluttered GUI now looked more like FCP7. Some editors even said it was the FCP8 that everybody wanted. Adobe had taken notice of FCX though, borrowing the skimming feature and re-branding it as 'hoverscrubbing,'

Whilst we are on the subject of rival products, Autodesk announced on the day before the NAB show that Smoke 2013 was to be released on the Mac for $3,495. The good news for FCP users was that the new price chopped Smoke would accept native FCP7 and FCPX XMLs. Autodesk are currently offering a free trial of Smoke until the product is released.

The next update to Final Cut Pro caught us on the hop. The release of the retina screen MacBook Pros at WWDC 2012 gave Apple the opportunity to upgrade certain apps to take advantage of the extra pixels. FCPX was updated to 10.0.5, Motion to 5.0.4 and Compressor to 4.0.4.

So there you have it, a potted history of Final Cut Pro X. We don't think there is anybody at Apple who won't agree that the launch could have been handled in a way that could have stopped a lot of the criticism. Looking back over major transitions in Apple's technology, OS9 to OSX and PPC to Intel for example, they both had overlap periods. The message was 'This is new and cool and we would like you to move over, when you can,' not 'This is cool and you have no choice.'

Apple have pulled their finger out with updates and releases. They've also mentioned that next on the list is a viewer and better audio mixing, so maybe they are listening to us editors. One thing that can't be denied is the fact that they have sold millions of copies. How many millions we don't know, but FCPX isn't a flop by any stretch of the imagination.

There are editors out there who have moved to other NLE's who continue to complain about FCPX. You can't satisfy all the people all the time and hopefully over the months they will get as tired of the bitching as we are.

Where do we see FCPX in another year? More updates, more features and more users. Apple have got a long way to go in restoring the confidence it lost in the market by botching the release of FCPX and killing off other apps such as Final Cut Server, but they are trying.

We would like to hear from you, where do you think FCPX is heading and why? The best ways to do this is are by posting Facebook comments below or adding your voice to our Forum. It's going to be another interesting year.