We are always having to cut or extend music to the right length, always a lot of foot tapping, marker placing and nibbling frames away to get the perfect result. What if there was an easier and more flexible way? FCP Audio has an interesting range of music products that uses 'Soundstacks' that build music in sections.

Jon Corbett took a visit to FCP Audios's HQ to find out more:

Last week I had the opportunity to touch base with one of the directors from FCP Audio, a new company beginning to make waves within the Final Cut Pro community. For those who don’t already know, FCP Audio are the new kids on the block, and are supplying customisable music for FCPX whilst rapidly gaining a lot of traction, seemingly due to their new ‘SoundSacks’ formula.

A quick Facebook message followed by a few phone calls and I was lucky enough to be invited into FCP Audio HQ for a guided tour of the premises and an informative discussion on their plans for the future.

I was impressed. Although I found the main studio to be a little rough around the edges aesthetically, I felt this added to the overall character of their layer. I suddenly found myself surreptitiously smiling as a warm fuzzy feeling emerged in my belly, somewhat reminiscent of a trip to Abbey Road back in the glory days! 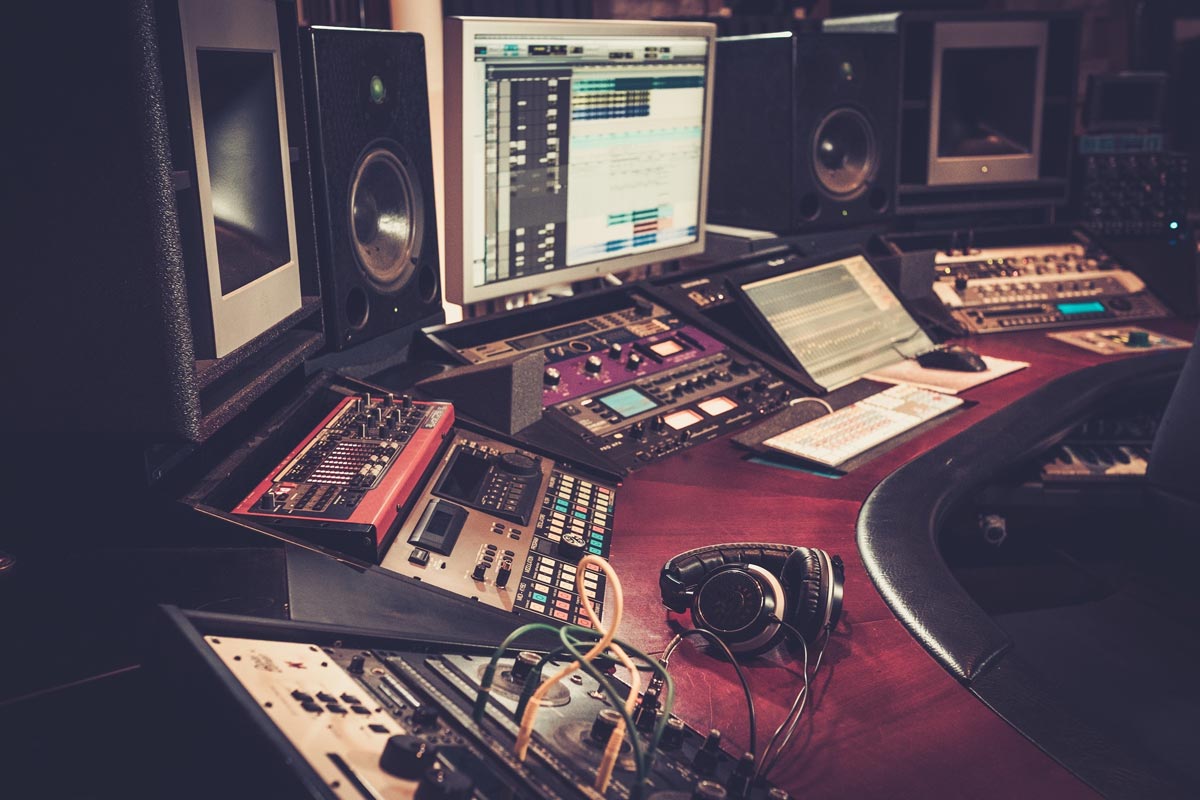 I spent some time exploring the cluttered corners and hidden alcoves of the Aladdin’s cave like attic, which houses the majority of their musical arsenal. Dusty violins, accordions, vintage analogue synthesisers, twenty something classic guitars along with racks of compressors and vintage gear. This was just the tip of the iceberg.

Following an Americano and a cigarette, we advanced down to their video editing suite. Now this is where the state of delirium took hold. I firstly noticed the two GH5’s, Phantom 4 and an open box of lenses. I couldn’t help but drool a little! The room was fully equipped with lighting rigs and green screen and was sound treated with an iMac Pro using some beautiful Munro EGGs for monitoring. All this alongside another rather large mixing console, the name of which escapes me now.

Anyway, I transgress a little. Following my exploration, I caught up with Anthony in their lounge area on one of the comfiest sofas my rear has ever had the honor of sitting on.

So, first off, what is FCP Audio and What services do you offer?

“FCP Audio essentially offers a music plugin for Final Cut Pro X. The plugin produces and licences Royalty Free music for the FCPX user. We have developed the 'SoundStack', giving users the ability to build a track from scratch inside the Final Cut Pro X timeline. Using all of the separate elements of the main pre recorded versions, all of the fundamental parts of the track are individually separated out.

This allows you to build a track around your video. Sparse or full, long or short. The tracks all come with a visual click too. Pretty handy huh? This means our buyers can edit their footage in sync with the tempo of the music!”

All sounds very interesting. Are there any other providers offering the same service?

“No not the same service, there are obviously other companies providing Royalty Free music. Some are subscription based, some are as much as £500 per track and some require unstable software to generate the audio. We offer three tracks for £29.99, including all of the elements, the installer app, unlimited license and a visual click aid.

We feel our license has been a very strong selling point to our buyers. It covers all forms of usage and lasts forever! We are the first library to have all of the tracks split up into elements and bundled together in a package too.”

How did you come up with the idea for the business and how long has it taken you to reach this point?

“I have always been a keen videographer and produced many videos using Final Cut. I discovered that when clients were on a budget and didn’t fully understand the licensing tier, I found my self running out of music. I was always hearing the same songs being used repeatedly and found this to be thoroughly frustrating.

But from limitations come innovations! I already owned a small commercial recording studio at this point and about two years ago, the hands of fate introduced me to Ryan, my current business partner and lead producer here at FCP. We spent many long nights fuelled by coffee and Chinese food, planning and deliberating until the idea became a reality.

We designed a system enabling users to choose the direction of their music and tailor its length and density. One year and a mountain of trials and errors later, we launched with our growing catalogue of ‘SoundStacks’”.

What are your plans for the future? More of the same or any tricks up your sleeves?

“Well, funny you should ask, we are currently working on three new undoubtedly game changing ideas. They are all still in the primitive stages of development at the moment but you should expect to see and hear some great new content later this year.

Our team are also producing many new genres of ‘SoundStacks’ so keep your eyes and ears peeled. If anyone would like to stay updated, they can subscribe to our newsletter by downloading the free track from our main ‘SoundStack’ page.”

What have been your main obstacles in getting this far?

“To be honest, the main obstacle we faced initially was designing the first ‘SoundStack’. We really wanted our user experience to be as streamlined as possible and the first few test runs didn’t work exactly as we has planned. As soon as these issues were rectified, the ride became pretty smooth.

Our main issue now, if you could call it that, has been building up a roster of session musicians from the region and having them all available when we need them. We now have a vast array of very talented musicians on our books though, both session and full time.” 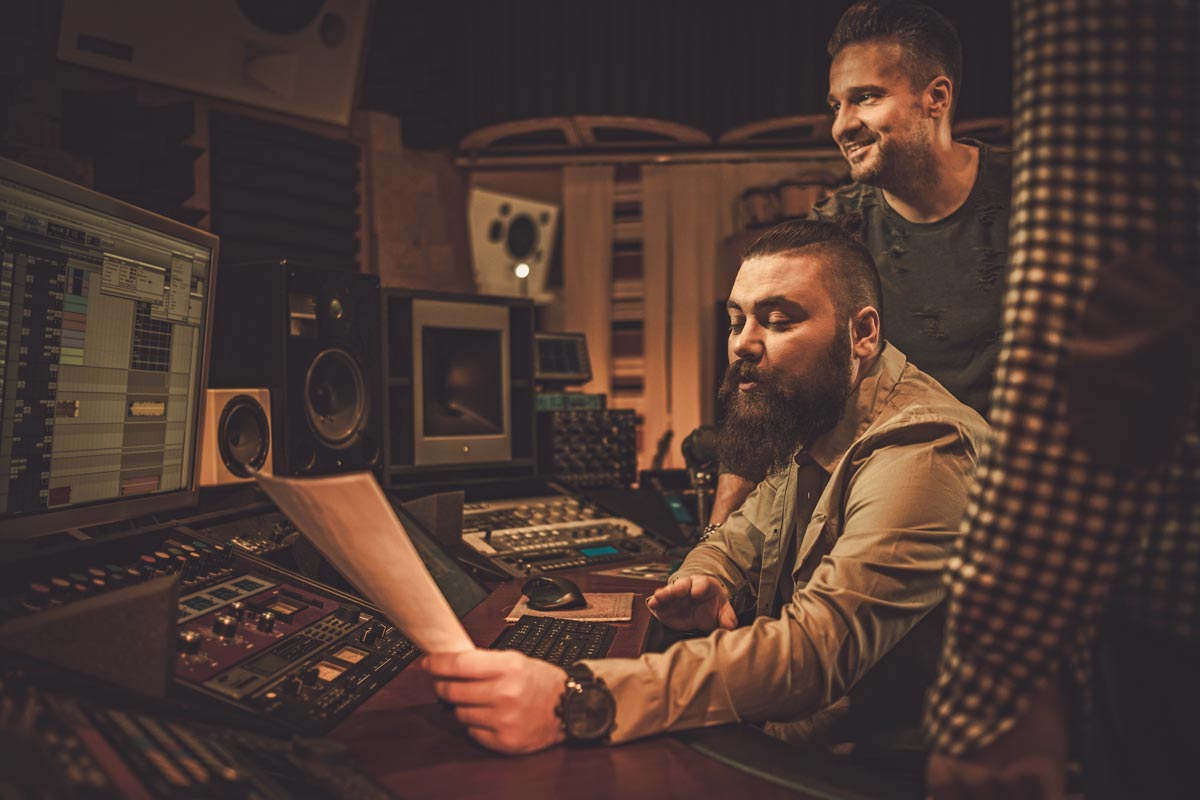 Were you expecting things to take off as quickly as they have?

“I was always quietly confident that the idea would be a hit with FCPX users. Our formula is so simple and allows your editing to take a different course. What if you need to get more info across in your video but the track you have is only 2 minutes 23 seconds? Something has to go? But what if it is all important?

With our ‘SoundStacks’, you can arrange the music to be as long or as short as you want. If you would like the track to have no drums, no problem, you can effortlessly build the track around your video.”

What would you say separates you from any other online music providers?

"To be honest, the music and the ‘SoundStack’ formula speak for themselves. Premium quality, customisable audio at an affordable price. Need I say more? Haha"

Well I can safely say it was a real pleasure to meet such a friendly and inspiring team of people. If you want to see what they have on offer, head over to fcpaudio.co.uk They seem to have a pretty diverse selection of music which they say is growing regularly, so watch this space!