KeyFlow Pro 1.8 has just been released. Ryan Velin and Mads Larsen Nielsen from Metronome Productions in Denmark give us a first look at the update which includes the FCPX collaborative workflows by dragging and dropping.

At Metronome Productions in Copenhagen, Denmark we have been working together with the very skilled team at KeyFlow Pro (KFP) to fill some of the gaps we feel are missing in the current version of Final Cut Pro X (FCPX).

More than 50 seasons surpassing a staggering 500 individual episodes have been cut in FCPX during the last 5 years at Metronome Productions.

We will run you through some of the new features in Keyflow Pro 1.8, and explain why these new features make so much sense when working on large scale television shows.

One of our largest productions ever to be cut in FCPX will form the basis of this article. We will be describing how a team of five editors, two editor’s assistants, and eight other post production staff, 15 in total, are using KFP as an integral part of sharing not only media but also FCPX Projects in a familiar interface and never having to go to the Finder.

We really believe that KFP fills the void which could have been a FCPX “Shared Event” or even Final Cut Server.

One of the first things you notice as you launch KFP are the similarities to FCPX. The app looks very much like FCPX and some of the nomenclature is the same; KFP also has Libraries, Smart Collections etc.

In KFP you even connect to a shared Library

Thanks to an intuitive interface and the Bonjour networking technology built into every Mac, KFP is real easy to set up.

One of the great new features in KFP 1.8 is the ability to set up Live Folders. 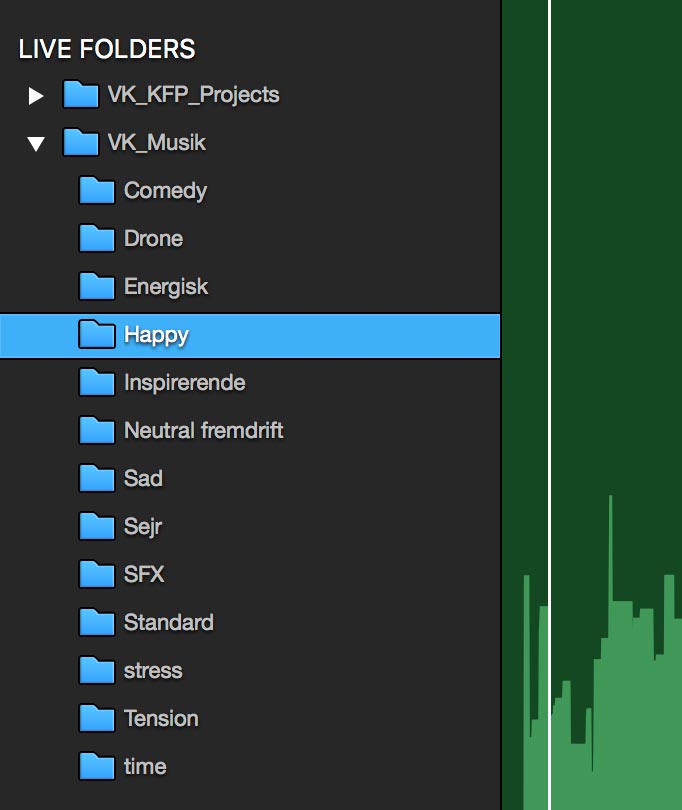 Live Folders are folders stored on a specific location on the server where KFP constantly scans for new files. These files then show up in KFP and can the be dragged directly from KFP into FCPX.

The clever thing with Live Folders is that everyone on the production will have access to an ever growing pool of media files added to these Folders by each individual user.

In our case Live Folders primarily serve as one big music pool.
You need to understand that on a production of this scale music is added to the project by the editors as the production evolves.

So before creating Live Folders we asked the editors to come up with ten to fifteen genres of music that all music can fit into; Drama, Tension, Drone, Sad etc.

Previously each editor did individual sorting of music in their own FCPX Libraries thus making it difficult to keep track of newly added music.

Now with the Live Folders workflow we have furthermore set up Safari so that each editor is prompted to choose into which Live Folder the music should go.

Automated rescans of Live Folders are done every one minute. This means that everything added by users to the Live Folder will show up on all 15 client computers with KFP running within one minute.

This is truly a centralized growing music database where all users have access to the same files sorted into specific genres across a network.

With KFP 1.8 you can also use Live Folders to share FCPX Projects using Drag-and-Drop. When thinking Live Folders again think “FCPX Shared Event”. This is truly amazing and opens up for a whole new way of working with FCPX. Particularly beneficial on large scale productions like ours.

Our workflow is heavily dependent on people exchanging versions of different edits. Previously we used to set up Folders in Finder on the server storage and we would have editors, pre-editors, post producers and all sorts of people rummaging around in the Finder in search of their XML files. You can imagine what would happen if someone accidentally pressed “delete” in the wrong location!

Now with Live Folders all exchanging of Projects between everyone on our production takes place with a simple drag-and-drop gesture from FCPX to KFP and vice versa. It has never been easier to send an XML to another person. And since KFP doesn’t allow for users to permanently delete files in the Live Folders security has never been better.

In order to make KFP an even better tool for the types of workflow at a large production company like ours we have suggested a bunch of feature requests which have also been implemented into KFP 1.8:

In our view KeyFlow Pro and Final Cut Pro X now fit together like a hand in glove. Even though it is marketed as a Media Asset Management tool we find that the features in KFP greatly enhances the collaborative workflow experience when you work in small or large environments.

Looking ahead we have great confidence that the team at KeyFlow Pro will continue to enhance the program’s ability to work in conjunction with FCPX.

Features we would love to see in a future release are: Notifications, Local Personalized Folders, ability to search Annotations across all clips, automatic Role assignment, and iXML metadata support.

Ryan Velin and Mads Larsen Nielsen are Heads of Post Production Technology at Metronome Productions in Denmark. Both are skilled editors with more than 15 years of experience, and are now responsible for developing network and server environments and optimising workflows for Final Cut Pro X productions at Metronome.

Editor: There will be a more detailed article about the KeyFlow Pro 1.8/FCPX workflow soon!